Overview: There is no evidence of an organized effort to intentionally place bricks near Black Lives Matter protest sites.

Description: In late May 2020, images and videos appeared on social media showing large pallets of bricks sitting on sidewalks where Black Lives Matter protests were occurring—and where, supposedly, no construction was underway. As the largely peaceful protests sparked accusations that protesters were engaging in violence or rioting, suspicions grew around the bricks—with some people adopting the hashtag #baitbricks. Multiple conspiracies quickly emerged, alternately accusing those sympathetic to the protesters’ cause of strategically placing the bricks for use as weapons, accusing law enforcement of secretly distributing bricks in order to blame protesters and justify harsher crackdowns on the protests or the use of excessive force, and accusing outside agitators (including antifa) of attempting to undermine the Black Lives Matter protests by inciting violence. Repeatedly debunked by media and police departments, the rumors persisted.

Videos purporting to show piles of bricks far from any construction sites attracted millions of views on social media. On white supremacist Telegram channels, comments included, “bricks sponsored by deep state” and “I bet some fucking jew [sic] put those bricks right there.” According to Snopes, QAnon followers also circulated brick-related conspiracies involving perennial bogeymen George Soros, Warren Buffet and Bill Gates. A post from Texas echoed a common sentiment, asking, “Anyone know why these random piles of bricks keep showing up near protest sites??? Someone is funding the rioting.”  Meanwhile, the local police department confirmed that the bricks were part of a planned construction project unrelated to the protests.

On June 3, New York City Police Commissioner Dermot Shea reposted a video on his official Twitter account of police officers carrying bins of rocks with the caption: “This is what our cops are up against: Organized looters, strategically placing caches of bricks & rocks at locations throughout NYC.” The video, however, was shot on a Brooklyn street corner where no protests had occurred. A video spread on TikTok and Twitter allegedly showed Boston police officers transporting bricks, fostering the conspiracy that police departments were responsible for distributing the bricks. The Northeastern University Police Department, however, refuted the video by responding that the bricks were in fact being unloaded from a truck after being removed from a broken sidewalk. 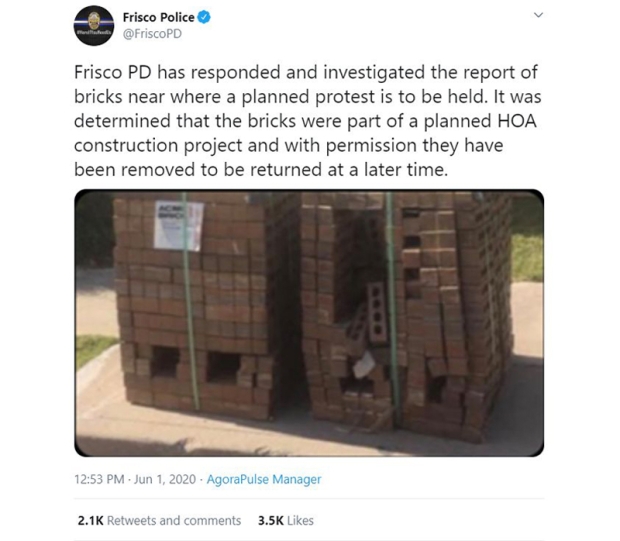 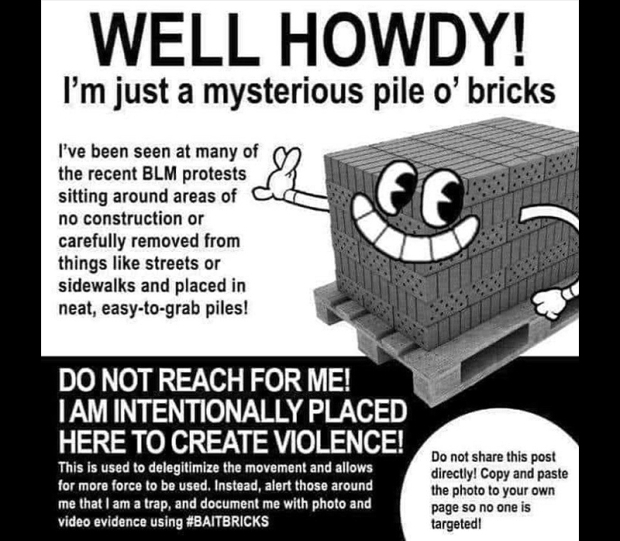