League of Lessons: Why Gaming Matters 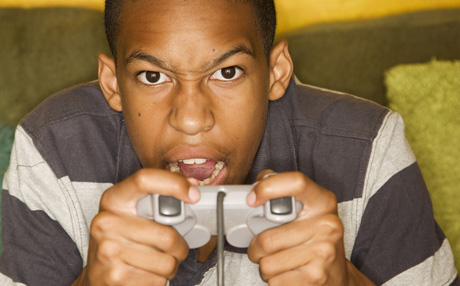 I was in the middle of a presentation to three hundred middle schoolers when a boy’s arm shot straight up so desperately that I thought it would separate from his body. I stopped, midsentence. Clearly this child had something incredibly important to ask and I just couldn’t ignore him.

Me: What’s your question?

Boy: Are you Xbox or Playstation? (I froze, realizing the magnitude of the question. Three hundred boys looked at me with bated breath.)

Me: I refuse to answer that.

Me: If I tell you, you’ll make an assessment of my character and intelligence.

Looking back on that moment, I don’t know how I knew that this was one of the better responses I could have given. But immediately after the presentation, I had three realizations: 1) I was very grateful to the teaching gods that somehow I answered that question correctly, 2) Acknowledging the importance of his question was meaningful to the other students and 3) I’d better educate myself much more about gaming as soon as possible.

But why was the question and my answer so important?

Gaming is a critical point of entry to youth culture and it provides an opportunity to build relationships with many of our students, especially those who are difficult to reach. The problem is that unless they are gamers themselves, educators and counselors know almost nothing about the games their students play and are often quick to express their hatred for “violent video games” and their dismay about how much time kids spend playing them.

There are countless studies on the possible causation between playing a violent game and being more violent and aggressive in real life. And there are countless, and just as credible, studies refuting the causation argument. But most educators really can’t shake their certainty that playing violent video games somehow causes a child to be more aggressive and even violent.

Young people who game know our bias and the ignorance this bias comes from. It’s this reactivity about games that can make it much more difficult for us to develop strong relationships with young people. It’s also undeniable that gaming is an essential part of many students’ lives. We have an obligation to know about this incredibly diverse world so we can effectively help children and teens navigate it with informed, constructive guidance.

And the reality is that a great game can challenge a player in exactly the same way a great teacher can. If you bring them together, things get really interesting.

What’s good about a good game?

Have you ever wondered why you have students who can’t or won’t do 20 minutes of homework but will play a video game for hours at a time? Here are a few possible reasons why:

Games make you want to work hard to overcome obstacles.

Games make you think through problems in a different way to achieve your goal.

Games teach you to fail as part of the process of learning.

Games are part of the basic social fabric for many kids and teens. Sitting on the couch with your friends, eating Doritos and playing FIFA is quality bonding time.

It’s natural for teens to want to escape the limitations and frustrations they have in their real lives, and often they feel powerful and useful in their virtual lives. Remember what it was like to be a young person? You probably had constant, and possibly highly irritating, interactions with authority figures (school administrators, coaches, teachers, parents, more powerful social peers, etc.). When you play an immersive game, especially if you’re good at it, you can counteract the feelings of powerlessness and humiliation playing the game. When you add in the possibility of playing a game with a team of other (real) people who recognize and depend on your ability to help the team overcome challenges, this is an incredible motivator to play the game. It’s also one of the reasons why you may have students who stay up all night playing video games, especially if the other players on their team are in different time zones.

So what can be not so good about games?

While many educators focus on social cruelty on social networking sites like Facebook, Snapchat, Instagram and Ask.fm, games that allow players to chat or talk to other players online through a headset can experience similar harassment. General social cruelty as well as homophobic, racist, and sexist verbal attacks can be common—regardless of the maturity rating of the game.

We should take this as the opportunity it is: games provide some of the most fertile ground to talk to our students about the “isms” in a context that they can easily relate to. Here are two examples you can use for discussion in the classroom:

Ask your students if they have ever played a video game and heard another player verbally attacked. What were the words used to demean the targeted player? What did the other players do, if anything, in reaction? What are the reasons that people don’t say anything, especially because they wouldn’t be risking a lot since they don’t interact in real life?

Ask girl gamers if they have experienced negative reactions from other players because they’re female. What were the words used against them? What was the motivation of the attacking player to go after the girl? How have they responded (for example, many female gamers won’t speak unless they’re playing with a group of people they know aren’t going to verbally attack them)? Ask boys what they have observed and what they’re doing about it.

A great lesson plan was published in Paul Davaris’ recent article in Teaching Ethics and Narrative...With Violent Video Games? In it, he highlights religious studies educator Tobias Staaby’s use of the popular zombie game, The Walking Dead, to encourage his students to examine group dynamics and moral dilemmas that occur within the game narrative. Staaby reports that his students practiced problem-solving and ethical decision-making while reflecting on the consequences of their actions.  Not a single parent complained about the content.

But of course there are games with disturbing violent content. The best known is Grand Theft Auto. As compelling as the game is, the narrative includes a mandatory torture mission and there are always options to do truly heinous things like sleep with and kill a prostitute—and then take back the money you paid her. If educators don’t know the difference between games and consider them all equally “violent,” any discussion we have with our students will only reinforce the belief that we don’t know what we’re talking about. If we talk to our students in a manner that reflects that we have taken the time to educate ourselves about the topic, not only can we credibly talk with them but we have role modeled the value of having educating oneself before engaging in critical dialogues with each other.

If you have a student that you’re struggling with—as in you’re trying to get through to this kid and you’re met with a wall of seeming indifference or hostility—use gaming as a possible way to build rapport. Here’s some sample things you can say:

Hey thanks for meeting with me. I just wanted to check in with you about my class.

Ok. But I don’t want it to be fine. It’s really important to me that you don’t think the class is a complete waste of your time.

No you’re not in trouble. Let’s forget about the class for a moment and take a step back. What do you do to relax or have fun? What movies or books do you like? Do you play video games?

Why do you want to know?

Because in order to be the best teacher I need to be for you, it’s helpful to know what you like doing and why.

I don’t know that game. Can you tell me about it?

In one short conversation, you’ve opened up communication by showing the student you want to know more about something that’s important to them.  And you’re not making a judgment about it. That is a powerful lesson.

"We should take this as the opportunity it is: games provide some of the most fertile ground to talk to our students about the 'isms' in a context that they can easily relate to."