This database provides an overview of many of the symbols most frequently used by a variety of white supremacist groups and movements, as well as some other types of hate groups. 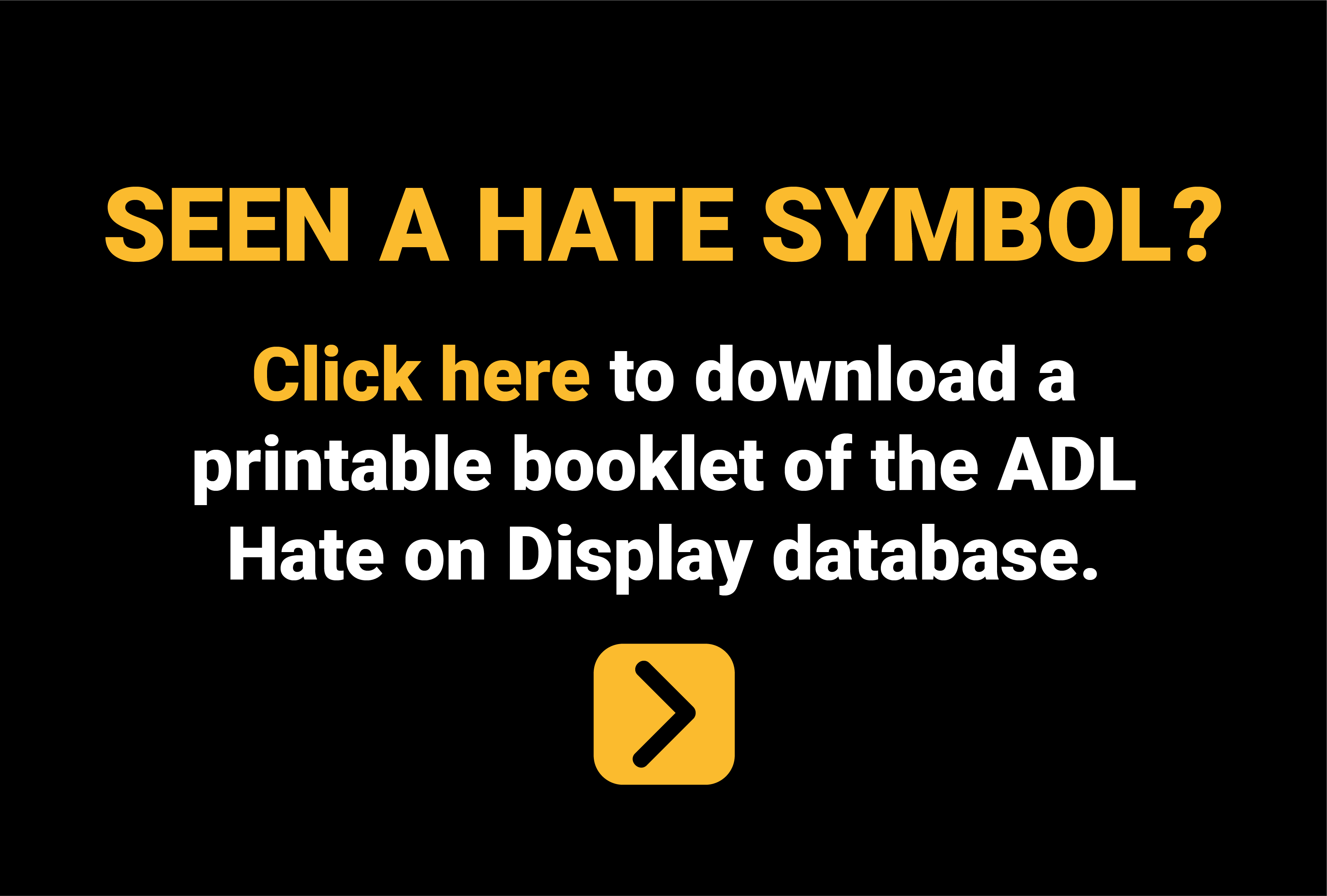 Get the Document
Hate Symbol

AC
The Diamond
The Aryan Circle is the second-largest white supremacist prison gang in Texas and one of the largest such gangs in the United States. Its most common tattoo, known as a "shield" or "patch," consists of a square oriented to form a diamond shape. Inside the diamond is typically a swastika and the initials AC; it is also common to include SS lightning bolts.

The Aryan Circle is one of the largest white supremacist prison gangs in the United States. Its primary hand sign consists of holding up the thumb and the middle, ring, and little fingers of one hand, signifying the numbers 1 and 3 (which stand for AC). One can also hold up the little finger and the middle and index fingers, plus the thumb.

The Aryan Cowboy Brotherhood is a small white supremacist prison/street gang based primarily in Minnesota and Kentucky. Its main symbol consists of a helmeted and winged skull with the initials ACB.

White Power Fist
White Fist
The Aryan Fist symbol is a white supremacist symbol adopted from the "black power fist" used by black nationalist groups in the 1960s and 1970s.

The Aryan Knights are a white supremacist prison gang based primarily in Idaho. They often use the initials AK to identify themselves with tattoos or writing.

Church of Jesus Christ Christian
Aryan Nations is a decades-old American neo-Nazi group with a long history of criminal activity. Its logo consists of a Wolfsangel symbol in which the vertical line is replaced by a sword.

Bolts Up
Bolts to the Sky
The largest white supremacist prison gang in Tennessee is Aryan Nations (a different group than the neo-Nazi group of the same name). Aryan Nations gang members use a hand sign they sometimes refer to as "bolts up" or "bolts to the sky," consisting of forming the hand into a pistol shape and pointing it upwards or outwards.

The largest white supremacist prison gang in Tennessee calls itself Aryan Nations, a name borrowed from the neo-Nazi group of the same name, though the two are separate groups. Its primary symbol or "shield," is a tattoo featuring a rounded Celtic Cross, with different symbols in each of the quadrants of the cross.

The Aryan Renaissance Society is a small but long-lived white supremacist group that has resembled both a racist skinhead group and a prison clique at times. It has had members from a variety of places, but many came from Texas and New Jersey. Its logo is a phoenix image superimposed with a lightning bolt and a runic symbol.

The Aryan Terror Brigade is a racist skinhead group with members in the United States and Europe. The logo of the group is in the form of a Waffen SS divisional insignia outline, with a man's head and a gun, a wreath, and the initials ATB inside the outline. The shield has black, white, and red stripes (the colors of the Nazi flag).

The Aryan Warriors are a longstanding racist prison gang based in the Nevada prison system. Members have created a variety of tattoos, but many of them consist of the gang's name or initials, or have some sort of Viking-related imagery, such as horned helmets or axes.

The Atlantic City Skins are a longstanding New Jersey-based racist skinhead group. Their logo consists of a rounded Celtic Cross on top of a row of skulls, which may have the initials ACS on them.

Atomwaffen Division is a neo-Nazi group that emerged in 2016. “Atomwaffen” is the German word for atomic weapons and the group’s logo features a radiation warning symbol on a Waffen SS divisional insignia shield.

AYAK is Ku Klux Klan shorthand for "Are You A Klansman?"

Ku Klux Klan
MIOAK
The primary insignia of Ku Klux Klan groups is the MIOAK (or "Mystic Insignia of a Klansman"), commonly referred to as the "blood drop" cross.

The term "blue-eyed devil" is a racial epithet directed against people of European ancestry that originated in Asia. Some white supremacists have adopted the term for themselves, including a white power music band that appropriated the name and created a distinctive logo consisting of a rounded Celtic Cross out of which a man points a gun.

"Blut und Ehre" is a German phrase that translates into "Blood and Honor;" it was popularized by the Nazi Party (as a Hitler Youth slogan and elsewhere). Since World War II, this German phrase (and even more so for its English translation) has commonly been used by white supremacists in Europe, the United States, and elsewhere.

Bound for Glory is the name of a longstanding white power music band (dating back to 1989) from Minneapolis. It is popular among white supremacists. The main symbol associated with the band is a Thor's Hammer containing the band's initials. Also common are the band's initials in or superimposed over an Iron Cross. Both images derive from albums released by the group.

The “Bowlcut” is an image of a bowl-shaped haircut resembling the one sported by white supremacist mass killer Dylan Roof. People who use the “bowlcut” image or other “bowl” references admire Roof and call for others to emulate his racist murders.

Brothers of White Warriors is a New Hampshire-based white supremacist prison gang. Its most common symbol is an Iron Cross inside of which usually appear the group's initials, jail bars, and a swastika, although the swastika can also appear below the Iron Cross and there are other variations.

One of the most potent hate symbols is the burning cross, popularized as a terror symbol by the Ku Klux Klan.

Neo-Nazis have adopted the Ku Klux Klan practice of symbolic burnings, substituting swastikas, othala and life runes, triskeles and the Celtic cross for the traditional cross burned by Klan members.

Odin’s Cross
Sun Cross
Wheel Cross
The white supremacist version of the Celtic Cross, which consists of a square cross interlocking with or surrounded by a circle, is one of the most common white supremacist symbols.

The Confederate flag is one of the more common white supremacist symbols. Although still used by non-extremists, especially in the South, as a symbol of Southern heritage or history, a growing number of people recognize it as a hate symbol.

World Church of the Creator
WCOTC
COTC
The Creativity Movement is a white supremacist group that claims to be a religion for white people. Its symbol is a crown on top of a large W (for "white").

Organization 1488
Crew 1488 (sometimes called Organization 1488) is a small racist prison gang based primarily in Alaska, though it has a small presence in Colorado. Its primary symbol consists of a swastika intertwined with an Iron Cross, with 14, 88 and SS lightning bolts inside the Iron Cross.

Dirlewanger
The crossed grenade emblem originated with the infamous Dirlewanger Brigade of World War II, a Waffen SS unit that engaged in a number of atrocities.

The crucified skinhead is a common skinhead symbol used by racist and non-racist skinheads alike, typically to expressed a perceived sense that society is opposed against them. Racist skinheads often adorn the symbol with additional hate symbols or replace the cross itself with a hate symbol.

“Day of the Rope” is a white supremacist slogan referring to mass murders of “race traitors” that occur in The Turner Diaries, a novel written by neo-Nazi William Pierce. The slogan is typically used to urge or promise some similar scenario in the real world.

“Diversity = White Genocide” is a white supremacist slogan intended to suggest that multiculturalism will mean the death of the white race.

Parentheses
Parenthesis
The "echo," as it is sometimes called, is the on-line use by anti-Semites of multiple parentheses around a person's name to indicate that they are Jewish or, when used around a phrase or term, such as (((banker))), to imply that the word "Jewish" should be added to it.

The European Kindred is a large white supremacist prison gang based primarily in Oregon. Its primary symbol is a "shield" tattoo containing the initials EK, often displayed on the calf.

Are we missing something?

Submit a Hate Symbol to ADL at hate-symbols@adl.org

All the symbols depicted here must be evaluated in the context in which they appear. Few symbols represent just one idea or are used exclusively by one group. For example, the Confederate Flag is a symbol that is frequently used by white supremacists but which also has been used by people and groups that are not racist. Similarly, other symbols in this database may be significant to people who are not extreme or racist. The descriptions here point out significant multiple meanings but may not be able to relay every possible meaning of a particular symbol.

Hate on Display is a trademark of the Anti-Defamation League.