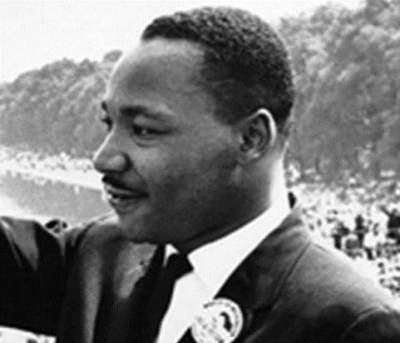 Martin Luther King Jr., an American clergyman and civil rights activist, was one of the most important moral voices of the civil rights movement, a champion of equal rights and desegregation, and an advocate of nonviolent civil disobedience.

Born on January 15, 1929 in Atlanta, Georgia, he played a pivotal role in ending the legal segregation of African-American citizens in the South and other areas of the nation, as well as the creation of the Civil Rights Act of 1964 and the Voting Rights Act of 1965. Dr. King has become a national icon in the history of advancement for rights, equality and inclusion for all Americans.

Dr. King attended segregated public schools in Georgia, graduating from high school at the impressive age of 15. He received a degree from Morehouse College where both his father and grandfather had also graduated. After three years of theological study in Pennsylvania, where he was elected president of a predominantly white senior class, he was awarded a divinity degree in 1951. With a fellowship he won, Dr. King enrolled in graduate studies at Boston University, receiving his doctorate degree in 1955. In Boston he met and married Coretta Scott and together they had four children.

Both a Baptist minister and civil rights activist, Dr. King had a seismic impact on race relations in the United States, beginning in the mid-1950s. Dr. King led the first great nonviolent demonstration of contemporary times—the 1955 Montgomery Bus Boycott—and helped found the Southern Christian Leadership Conference (SCLC) in 1957, serving as its first president. During these days of boycott, Dr. King was arrested, his home was bombed and he was subjected to personal abuse.

Dr. King's efforts led to the 1963 March on Washington, where he delivered his now-iconic "I Have a Dream" speech. There, he established his reputation as one of the greatest orators in American history. King was awarded five honorary degrees and named Man of the Year by Time magazine in 1963. In 1964, at the age of 35, Dr. King was the youngest man to receive the Nobel Peace Prize. When notified of his selection, he announced that he would turn over the prize money of $54,123 to the furtherance of the civil rights movement.

On March 29, 1968, Dr. King traveled to Memphis, Tennessee, in support of the black sanitary public works employees, who were on strike for fair wages and better treatment. During that trip, on April 4, 1968, while standing on a balcony outside his room at the Lorraine Motel, Dr. King was struck by a sniper’s bullet. King was rushed to St. Joseph's Hospital, where, at age 39, he was pronounced dead later that evening.

Decades after his death, Dr. King is one of the most widely known leaders of his era. His life and work have been honored with a national holiday, schools and public buildings named after him, and a memorial on Independence Mall in Washington, DC.