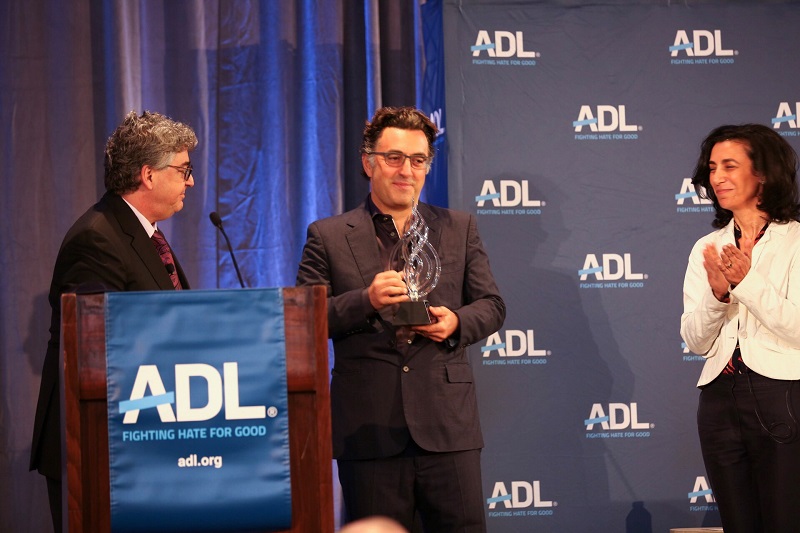 “The filthy Jew is bringing the filthy Muslim into this country.” This sentence was posted by Robert Bowers sometime in October 2018. A few days later, he massacred eleven Jews at a synagogue in Pittsburgh. He murdered them because they were Jewish. Only because of their religion and heritage. Based on Bowers’ other postings on social media, he would’ve killed just as many Muslims, Mexicans, gays and immigrants if he could. He definitely had enough guns and ammunition. His hatred of Jews and “others” knew no boundaries. And he used social media to spread his venom.

My friends, if any one of us thinks that she or he is safe from the hate that is surrounding us because we’re not the actual subject of the vile statements of a bigot at any given time and place, we should remember those eleven words spewed out by Robert Bowers: “The filthy Jew is bringing the filthy Muslim into this country.”

And if any Muslim in my country, Iran, thinks that he can ally himself with former KKK Grand Wizard David Duke against Israel, he should also read and re-read Bowers’ words. One of the most shameful episodes of modern Iranian history was when David Duke was invited to a gathering of Holocaust deniers in 2006. Duke went to Iran on the personal invitation of former president Mahmoud Ahmadinejad, who, ironically, is now an opposition figure in the country.

The current government of Iran may try to distance itself from this and say that Ahmadinejad is not the president anymore and anti-Semitism and Holocaust denial are not official policies of Iran. But they lie. Ahmadinejad’s blunt Holocaust denial came after years of hate-mongering and terrorism against Jews and Israel by the Islamic Republic government. Hateful propaganda and terrorism preceded Ahmadinejad by decades. Those Iranian leaders, such as Supreme Leader Ayatollah Ali Khamenei and foreign minister Javad Zarif, who try to distance themselves from Ahmadinejad’s ugly rhetoric and actions, also played a role in provoking anti-Semitism in Iran through their silence during both the Holocaust cartoon exhibitions and anti-Zionist conferences.

I believe, in most cases, that anti-Zionism and anti-Israeli slogans are just another way of expressing anti-Semitism. This is very similar to white supremacists’ anti-Semitic dog whistles against prominent Jewish figures like George Soros and Lloyd Blankfein, calling them globalists who pose a danger to the American white Christian identity.

The anti-immigrant, anti-Semitic and Islamophobic verbal and physical attacks in the Middle East, Europe and this country are mostly committed by the same groups. And all of us, all Middle Easterners, all Europeans and all Americans, have a duty to speak out against prejudice and injustice, especially when hateful words are uttered by our leaders. As Jonathan Greenblatt has been saying over the past couple of weeks, “We should not tolerate intolerance.”

It’s an honor to receive ADL’s Daniel Pearl Award. I’ve been an admirer of the Anti-Defamation League since the 1980s, when I heard that it had condemned Louis Farrakhan’s admiration for Adolf Hitler. As a teenager living under Khomeini’s dictatorship in Iran, who eagerly read books by George Orwell and Arthur Koestler, I knew that Hitler was not a great man. And, by the way, that there are no good Nazis.

OverIn the last three decades I have tried to give a better understanding of the Holocaust and Jewish history to Muslims in Iran and around the world. I’ve been trying to understand Jewish history and culture, and have attempted to present different Jewish narratives in articles and films. I believe this is the only way we can build a safer future for our children and grandchildren. I hope in the future this award can be given to many more Muslims, and “technically”ly Muslims like me.

I was going to finish my speech with the words of Pastor Martin  Niemöller, “Then they came for me—and there was no one left to speak for me,” but I thought I should use my Persian poetic license and present a more hopeful rendition of the pastor’s words:

First, they vilified the Jews by calling them Bolsheviks and globalist bankers. People rose up and called those words ignorant, bigoted and dangerous. Then they demonized Muslims by calling them savages and terrorists. People protested and said, “you have no right to discriminate against a group of people.” Then, they took their hate speech to social media, especially Twitter. People asked tech companies to act responsibly and to  not to tolerate intolerance. Those companies obliged and made Jonathan Greenblatt very happy!