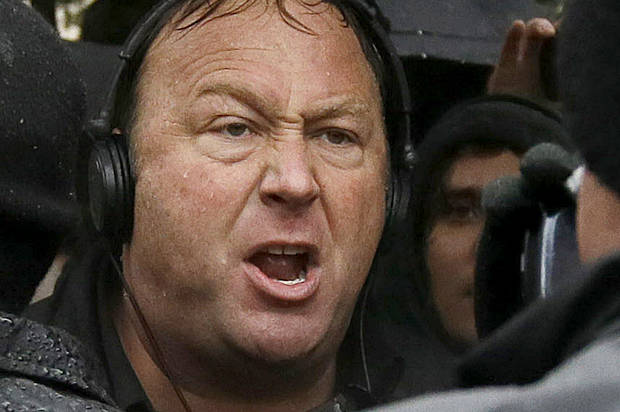 Jones rose from public-access television obscurity to national prominence by promoting paranoid allegations against the U.S. government and an alleged shadowy, power-hungry New World Order. Because of a range of legal and political issues, many consider Jones to be one of the most influential right-wing conspiracy theorists in the United States today.

Online and on the air, Jones breathlessly and stridently champions a litany of absurdities. To wit: the tragic massacre at Sandy Hook elementary school was a hoax perpetrated to curtail Americans’ gun rights; 9/11 was an inside job perpetrated by the U.S. government; the high school student survivors of the Parkland, FL, school shooting were “crisis actors” paid by the Democratic Party and George Soros; and juice boxes “make kids gay.” Many of his conspiracy theories emanate from the anti-government militia movement, whose ideology Jones adopted in the 1990s.

Based in Austin, Texas, Jones boasts a national audience, thanks to his radio show, which is broadcast on 100 stations nationwide, and his websites Infowars and Prison Planet, where his many specious claims are presented, in multimedia format, as “news.” Though platforms, pages, and channels associated with Jones were banned from prominent social media platforms in 2018, Infowars continues to maintain a significant reach. According to the web analytics firm Quantcast, Infowars reached approximately 3.34 million unique readers in February 2020 alone.

Jones blames the federal government, overseen by a shadowy New World Order, for everything from autism (which he claims is caused by vaccines) to numerous “false flag” operations (Sandy Hook, the 1995 Oklahoma City bombing). He is also a well-known “9/11 truther,” promoting the idea that the attacks were staged by the U.S. government for nefarious purposes. Jones’s theories, particularly those concerning the September 11 attacks, brought him a whole new audience and influenced a number of white supremacists, including Andrew Anglin (of The Daily Stormer) and Lee Rogers (of InfoStormer). Jones alleges the U.S. federal government is part of a global conspiracy to disarm and enslave Americans, and points to routine National Guard training exercises as evidence.

In 2015, Jones helped spark a hysterical reaction to Jade Helm, a U.S. military exercise designed to help soldiers train for various combat environments. Jones insisted it was a cover for the beginning stages of martial law, and enough people believed him that the Army had to send surrogates to calm anxious citizens.

In January 2020, Jones and Infowars fueled concerns that a gun rally in Richmond, Virginia, would result in violence by spreading the conspiracy theory that the Virginia government intended to confiscate weapons and asserting that the event would be targeted by a “false flag” operation, similar to what Jones said prior to the 2017 “Unite the Right” rally in Charlottesville, Virginia. Jones attended the rally with other Infowars correspondents, driving around in a black “battle tank” emblazoned with the Infowars logo and labeling Democrats as “anti-American globalists” while warning that the “globalist tyranny” was trying to start a civil war.

In the months since the coronavirus emerged as a public health threat, Jones has been hawking several products and dietary supplements as preventative and treatment measures for the virus – despite a lack of supporting scientific evidence. On March 12, New York Attorney General Letitia James also sent Jones a cease-and-desist letter regarding the sale of these dubious products, and a month later, the Food and Drug Administration sent Jones a letter instructing him to stop selling these products or risk legal action.

On April 18, 2020, Jones attended a protest in Austin, Texas, against coronavirus-related restrictions, and told the crowd, “Texas is leading the way against the tyrants.”

2. Jones has earned the vocal admiration of President Donald Trump and has claimed to be in contact with President Trump and administration officials.

President Trump has promoted a number of repeatedly disproven conspiracy theories advanced by Jones, including claims about President Barack Obama’s birthplace and allegations that millions of illegal immigrants voted in the 2016 presidential election.

The mutual regard between President Trump and Jones was on full display during a 2015 radio interview, when then-candidate Trump told Jones, “Your reputation is amazing,” and Jones responded, “What you’re doing is epic. It’s George Washington level.” According to Jones, Trump called after the election to thank the Infowars audience for their support, and to promise he will make them proud. In the wake of the election, Infowars opened a bureau in Washington, D.C., which was headed by Jerome Corsi, a right-wing author and conspiracy theorist, until he left the website in 2018.

Since the election, Jones has claimed at various times that he speaks with both President Trump as well officials in the White House. In August 2018, Jones claimed that he talks to the president “through different systems,” though he did not elaborate further. During an Infowars segment in February 2020, Jones claimed that he spoke to an official within the White House who said that President Trump intends to pardon Roger Stone.

Despite Jones’s assertions that he remains in contact with President Trump, he has not always spoke positively about the President. Most notably, following the American airstrikes carried out in Syria in April 2018, Jones said on his show that he would tell the president, “If you ever call me again, I’m going to tell you I’m ashamed of you.” He added: “I’m not in a…cult for Donald Trump,” before cursing the President.

3. Jones’s conspiracy theories have resulted in real world acts of violence and harassment.

Jones’s rhetoric has inspired action in the physical world. Perhaps most famously, Jones was one of the leading propagators of the “Pizzagate” hoax, which consisted of a convoluted collection of lies involving D.C. pizzeria Comet Ping Pong and owner James Alefantis, whose tenuous personal connection to several powerful Democrats was spun into a nightmarish conspiracy theory in which tunnels beneath the restaurant served as the headquarters for a Hillary Clinton-sanctioned web of child trafficking, pedophilia and murder.

“When I think about all the children Hillary Clinton has personally murdered and chopped up and raped, I have zero fear standing up against her,” Jones said in a (now deleted) YouTube video posted on November 4, 2016. “Yeah, you heard me right. Hillary Clinton has personally murdered children. I just can’t hold back the truth anymore.” Jones later said his comments were a reference to U.S. policy in Syria.

Much like Jade Helm incident before it, Jones’s rhetoric influenced real world events, as on December 4, 2016, Edgar Welch appeared at Comet Ping Pong with an assault rifle, ready to “rescue” the children he was convinced were being held in the basement. Welch fired several shots and spent close to an hour inside the restaurant before apparently determining that there were not, in fact, any signs of any criminal activity anywhere in the building. He surrendered to police, and later pleaded guilty to assault and weapons charges. Welch was sentenced in June 2017 to four years in prison.

After the shooting incident, Jones issued a rare apology for his outrageous allegations against Alefantis, saying, “I made comments…that in hindsight I regret.” It has been pointed out that Alefantis, as a private citizen, could easily sue Jones for spreading baseless accusations, and Jones’s carefully worded apology may have been an attempt to stave off any future legal action. Even after all this, Jones hasn’t dropped his child-trafficking theory – but now he’s targeting prominent Democrats, all of whom are public figures, and less protected by libel laws.

Jones also spread conspiracy theories regarding the 2012 Sandy Hook Elementary School shooting, labeling the tragedy as a hoax perpetrated by “crisis actors,” and his listeners harassed the victims' families for years. Jones has repeatedly lost his attempts to dismiss the civil suits brought against him by the families of Sandy Hook victims, and now owes those families nearly $150,000 in legal fees.  Jones lost his appeal in March 2020.

Wolfgang Halbig, one of the defendants in the suit and a former Infowars contributor who Jones has since distanced himself from, was arrested on January 27, 2020, for allegedly harassing the families of Sandy Hook victims.

4. Jones’s on-air persona is not demonstrably antisemitic, but he has featured antisemitic guests on his show.

White supremacists and other antisemites have expressed frustration at the absence of antisemitism on Jones’s programs and websites.

However, Jones  has been known to rail against the “Jewish mafia” and following the violent and chaotic “Unite the Right” white supremacist rally in Charlottesville, Virginia, he announced that he suspected that many of the attendees were actually “leftist Jews” there “in disguise,” to discredit white supremacists and incite violence. More recently, on November 30, 2019, Jones had E. Michael Jones, a prominent antisemite, on as a guest to talk about Sacha Baron Cohen’s call during his speech at ADL’s November 2019 “Never is Now” conference for social media companies to ban Alex Jones’s programming. During the conversation, Alex Jones acknowledged that he read E. Michael Jones’s book Monsters from the Id and spoke positively of the conspiracy theorist.

Though E. Michael Jones limited his overt antisemitism during the interview and tried to frame his primary struggle as against the spread of pornography – which he believes leads to moral degeneracy – he did accuse a Jewish individual of being responsible for the spread of pornography in Germany after World War II and claimed that the Israeli military used pornography as a means to disrupt the local population during a 2002 operation in Ramallah.

On January 13, 2020, Jones hosted Richard Spencer, the well-known white supremacist and antisemitic alt right figure, giving him a platform to express his white nationalist beliefs. Though Jones disagreed with some of Spencer’s positions, the two spoke extensively about the purported globalist plot to destroy western civilization, which some consider to be a dog-whistle term for “Jewish.” While Jones did not explicitly mention Jews during the interview (though he did assert that George Soros paid for agitators to attend the Unite the Right rally), Spencer twice referenced the role of “Zionism” as a driver of American empire and he refused to disavow Hitler when Jones asked outright whether he liked the Nazi leader.

5. Although Jones has been banned from several social media platforms for spreading violent, bigoted conspiracy theories, he maintains a significant audience.

In August 2018, Facebook, Apple, YouTube, and Spotify removed podcasts, pages, and channels belonging to Jones and Infowars. In September 2018, Twitter followed suit and banned Jones and Infowars from their platform, as well. As Facebook noted in a public statement, the company acted because Jones’s pages “[glorify] violence, which violates our graphic violence policy, and [use] dehumanizing language to describe people who are transgender, Muslims, and immigrants, which violates our hate speech policies.” Said Spotify about Infowars: “[the show] expressly and principally promotes, advocates, or incites hatred or violence against a group or individual based on characteristics.”

Prior to these removals, Jones enjoyed a large viewership, with Infowars garnering over 10 million visitors a month and his YouTube channel attracting approximately 2.4 million subscribers and 17 million monthly views. Though his platform has diminished significantly with the bans, Jones’s videos continue to be shared on social media platforms by fans, spam accounts, and smaller Infowars-owned accounts. In March 2019, one Infowars-linked YouTube channel had more than 64,000 subscribers before it was removed and in February 2020, Newsweek reported that three YouTube channels that shared Infowars content combined for more than 19,000 subscribers and over 2.5 million views since October 2019.