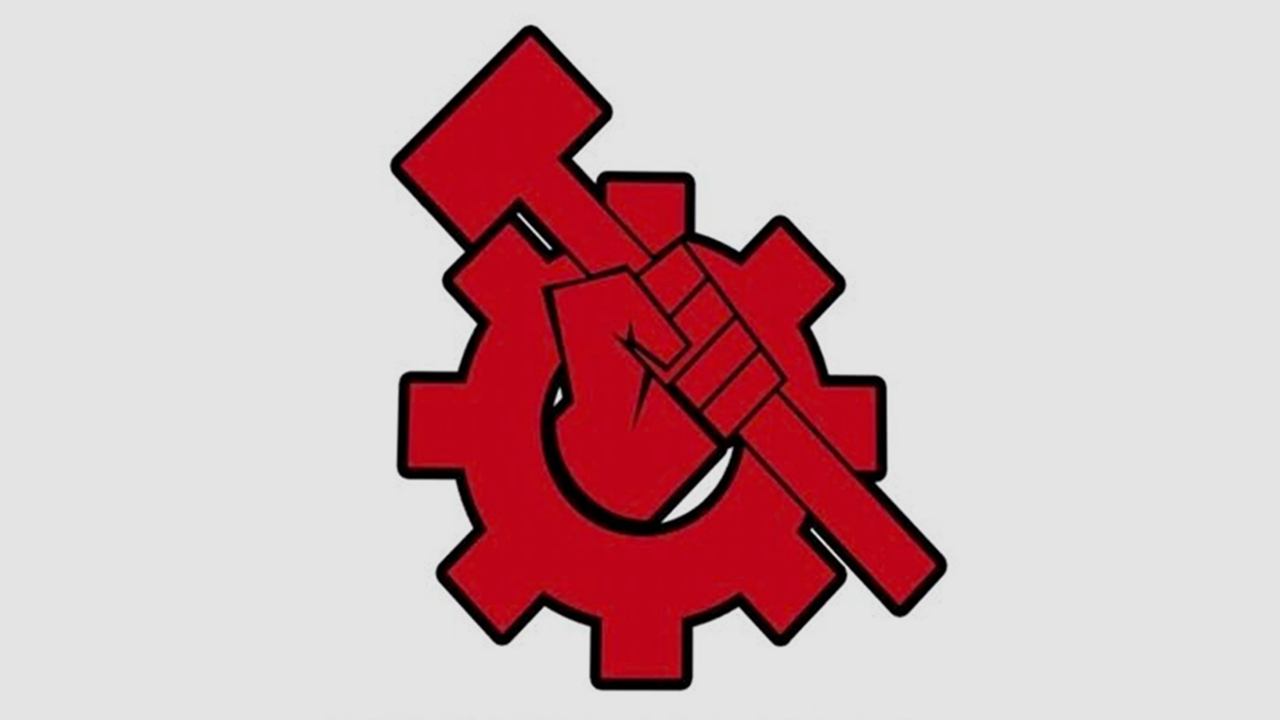 The Black Hammer Organization was established in 2019 in Atlanta, Georgia as an anticolonial movement for Black and indigenous peoples. According to the group’s website, its mission has been to “take the Land Back for all colonized people worldwide.” Their emblem, the hammer, “represents breaking the chains of colonialism and building a self-determined future for all colonized people worldwide.” In early 2022, the group began referring to themselves as the Black Hammer Party, rather than Organization.

While it is not clear how many active members are affiliated with Black Hammer, based on social media posts, the group likely had a few dozen core activists in its early years. At the group’s peak in 2020, there were at least a dozen chapters nationwide, as well as a chapter in Kenya. However, by mid-2022, the majority of these chapters grew inactive, and the Atlanta headquarters appears to have no more than a dozen key members. Former members have alleged emotional abuse and exploitation at the hands of Kodzo, the organization’s leader, as the cause for their departure. 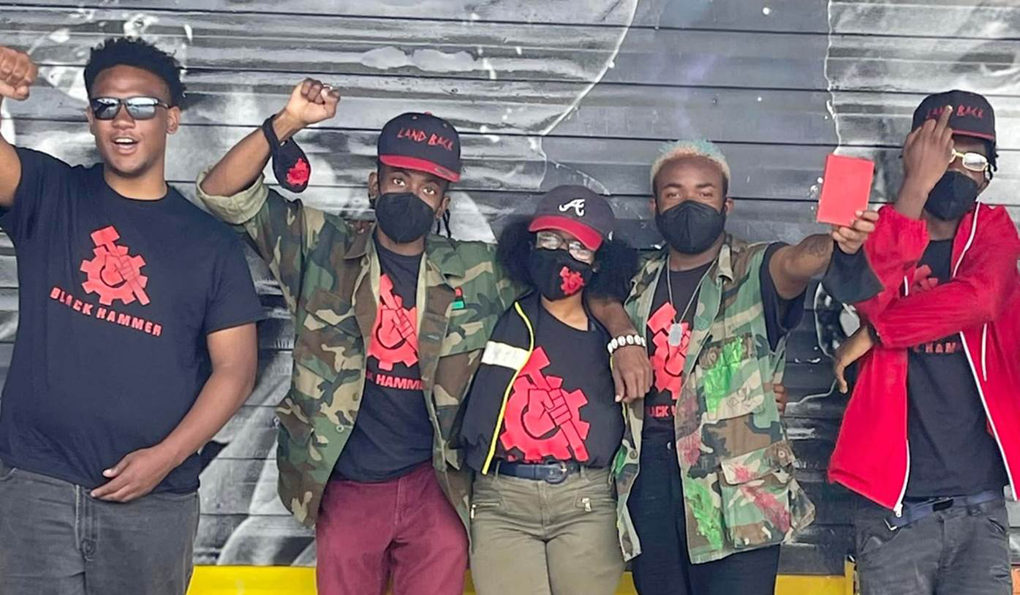 Ideologically, the group has changed over time. When it was formed, its focus was exclusively anti-colonial in nature. Claiming to advocate on behalf of all black and indigenous peoples, they promoted anti-capitalist and anti-colonial ideas during their events and public preaching sessions to people experiencing homelessness and the students and faculty at Georgia State University. Their main rallying cry is “Land Back,” an effort to “take all of our continents back from the colonizer.” To this end, they attempted (and failed) to purchase their own tracts of land, to be called “Hammer Cities,” to start a new homeland-of-sorts exclusively for people of color with “no cops, no rent, no Coronavirus, and no white people.” As part of their community organizing, activists across the country distributed food and face masks to the local people experiencing homelessness.

By 2021, while still promoting their “Land Back” goals, the group’s leader, Gazi Kodzo, began advancing a more far-right narrative. After failing to acquire land in Colorado in July 2021, the organization has since pivoted to focusing on their objection to Covid vaccine mandates as well as voicing support and staging protests for the January 6 Capitol insurrectionists whom Gazi refers to as “Freedom Fighters.” Kodzo has also promoted the Proud Boys and appeared on Gavin McInnes’ (the Proud Boys’ founder and former leader) show, advocated for formalized segregation in a video titled, “Why I agree with MAGA,” touted election conspiracy theories, and voiced support for Marjorie Taylor Greene after she was removed from Twitter.

The group is often seen armed and sporting tactical vests at public protests and events.

Both the organization’s official social media and Gazi Kodzo’s personal profiles have featured antisemitism and anti-Zionism. Their antisemitism is often couched in anti-colonialism, which lends itself to anti-Israel and anti-Zionism rhetoric. Tropes of Jewish control also feature in the group’s Twitter feeds.

Accusations of antisemitism arose in April 2020 when the group launched a campaign on social media, using the hashtag “2BFrank,” that attempted to minimize the Holocaust as “white on white crime” and to argue that Anne Frank’s story should not be taught in schools because the “true victims of genocide” are “the African and Colonized.” They have sited this as an extension of colonialism, asserting that the Jews in the Holocaust were European and as such, European (read: White) narratives are taking precedence.

In an article on their website from February 2021 addressing accusations of antisemitism based on this campaign, the group claimed not to be antisemitic, writing: “Our criticisms have always been against white jews [sic], who have just as much blood on their hands as any other colonizer.” The article goes on to state: “It should go without saying that after World War 2, white jews would go on to colonize Palestine. Had Anne Frank lived, there is no doubt that she would have been among the millions of white jews [sic] who helped push Palestinian mothers into the sea to drown in order to take their land. Fuck Anne Frank.” 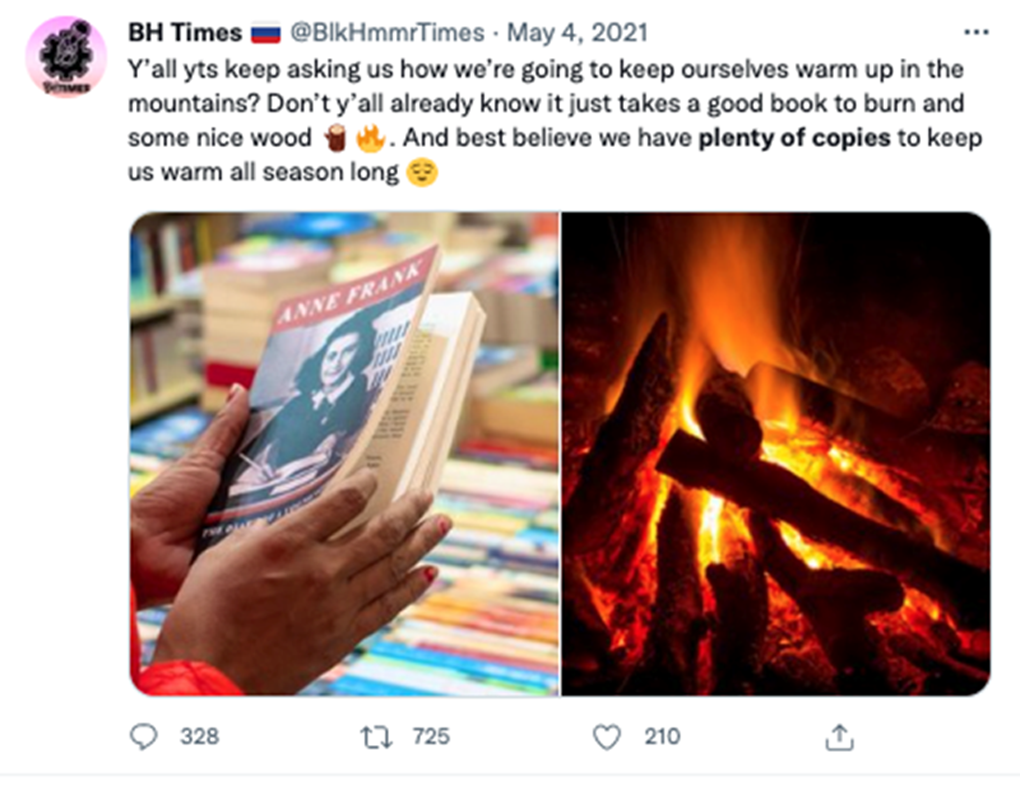 As it pertains to specifically to Israel, the Black Hammer Organization frequently refers to the country as “isn’treal” and calls for its demise. On July 12, 2020, Gazi posted an image of the Palestinian and Israeli flags, titled “media villain” and “actual villain,” respectively, with the caption “Death to ISntREAL.” According to multiple articles by the group, the group is “in full support of the abolishment of Israel.” In an article from May 2021 titled “Devil Colonizer Jews Continue Palestinian Genocide and Terrorism,” the author writes, “isn’treal has been steadily ramping up its ethnic cleansing of Palestinians these past couple months as the bleach demon colonizer jews [sic] scream for genocide proudly and with a racism paralleled by its father colony, amerikkka.” Another article published during the Israel-Hamas war in 2021 praised Hamas stating, “isn’treal will be erased.” The group has also claimed on social media and in articles on its website that the United States and Israel were "scheming” to steal the West Bank “while the masses are distracted” by the COVID-19 pandemic.

July 19-22, 2022: Police received a call from inside the Black Hammer’s Atlanta HQ home from an individual alleging that he’d been kidnapped by the group. When SWAT entered the house, they found an individual who had died from a self-inflicted gunshot wound. This person was identified as 18-year-old Amonte Ammons AKA “AP” who served as the group’s “Minister of Defense.” He was allegedly experiencing homelessness before joining the organization. Subsequently, Gazi Kodzo was arrested and charged with two counts each of aggravated sodomy, conspiracy to commit a felony, false imprisonment, kidnapping, aggravated assault and criminal street gang activity. Another Black Hammer leader, a 21-year-old man named Xavier H. Rushin (AKA Keno) was also arrested on charges of conspiracy to commit a felony, false imprisonment, kidnapping, aggravated assault, criminal street gang activity and obstruction. The warrant indicates that Gazi directed AP and Keno to "point guns" at two other members "and force them to move from the common area of the home into the garage with padlocks on the garage door so that Gazi could commit sodomy.” The warrants also state that AP was one of two armed individuals who locked the victims in the garage where the victim was sodomized. The warrants categorize the Black Hammer Organization as "an organization documented as a criminal street gang which engages in defined criminal acts.”

June 23, 2022: Black Hammers organized a protest outside of the Georgia State Capitol building to protest U.S. financial support for Ukraine. Since Russia invaded Ukraine, the Black Hammer Organization has publicly voiced its support for Russia.

May 9, 2022: A video posted to Gazi’s YouTube channel shows more than 20 people gathered outside CNN HQ in Atlanta. Gazi states that they are celebrating Victory Day for Russia as they fight against the United States.

March 23, 2022: Gazi and three Black Hammer members travelled to San Francisco to protest Meta. They claimed the protest was due to Meta banning people on Facebook and Instagram as well as faulting them for “pushing anti-Russia propaganda” and “stealing the election.”

February 8, 2022: In a Facebook post captioned “Black Hammer declares WAR on Mayor of Atlanta,” Gazi can be seen on video speaking during an Atlanta Council town hall meeting. After delivering a rambling speech, Gazi begins yelling accusations and threats at the councilmembers, shouting: “there will be punishment...I’m coming for you with an army, I’m coming for you, watch your back.”

January 11, 2022: During a stream on Gazi’s personal YouTube page, he indicated that he went to a shooting range with the Proud Boys. In a video posted on his Instagram on January 18,2022, it shows Gazi with guns at a shooting range, but does not show any other individuals with him.

January 6, 2022: Approximately seven members of the Black Hammer Organization protested outside of the CNN HQ in Atlanta to “not let fake news continue to lie about the Freedom Fighters of January 6th.”

May 16, 2021: In the Beaver Pines subdivision outside Norwood, Colorado, a group of Black Hammer members allegedly engaged in an armed standoff with a local resident after he asked them to move their vehicles that were blocking the community’s only road.