Update: The small, local crews of young white men who followed and supported Andrew Anglin and his neo-Nazi website, were responsible for 82 propaganda distributions in 2019 and 80 in 2018 but are currently inactive. Daily Stormer contributor Robert Warren Ray, aka Azzmador, remains on the lam from felony charges related to his alleged use of pepper spray on counter protesters during the tiki torch-lit march through the University of Virginia campus the night before UTR. In September 2020, a federal judge issued a bench warrant for Ray’s arrest after finding him in contempt of court for his repeated failure to appear for depositions related to the UTR lawsuit against him. Anglin, who remains in hiding after several judges awarded punitive damages to victims of his various trolling campaigns, continues to post bigoted and racist commentary on current events such as the COVID-19 pandemic, the 2020 presidential election and the January 6 insurrection.

Daily Stormer Book Clubs are small crews of young white men who follow and support Andrew Anglin and his neo-Nazi website, The Daily Stormer. Launched in July 2013, the website is notorious for its hateful, racist content and troll culture. Anglin and other contributors use the site to promote Hitler, Holocaust denial, anti-Semitism and other forms of hate. The website’s propaganda includes trolling instructions and urges readers to use these techniques to harass Jews and other minorities, as well as women and journalists.

Stormer Book Clubs were first proposed by Andrew Anglin in August 2016. Anglin explained that these groups of millennial males, “a real-life troll army,” would build bonds and develop a brotherhood as they prepare for the coming race war. The operations he outlined included firearms training, going to the gym, reading books, and political activism, including participation in protests and demonstrations.

Initially, “real-life” Stormer Book club activity was very limited. Most of the activity that did take place can be attributed to Robert Warren Ray (aka Azzmador).  Ray, an anti-Semite and vitriolic racist, is a Texas-based Daily Stormer contributor who has described himself as the Stormer’s “man on the ground.” He also hosts the Krypto Report, a Stormer podcast.

Ray’s most notable activity was his attendance at the August 2017 Unite the Right rally in Charlottesville, Virginia, where he showed up with a group of Texas-based white supremacists, which included several other Stormers, as well as the Texas Chapter of Vanguard America led by Thomas Rousseau. 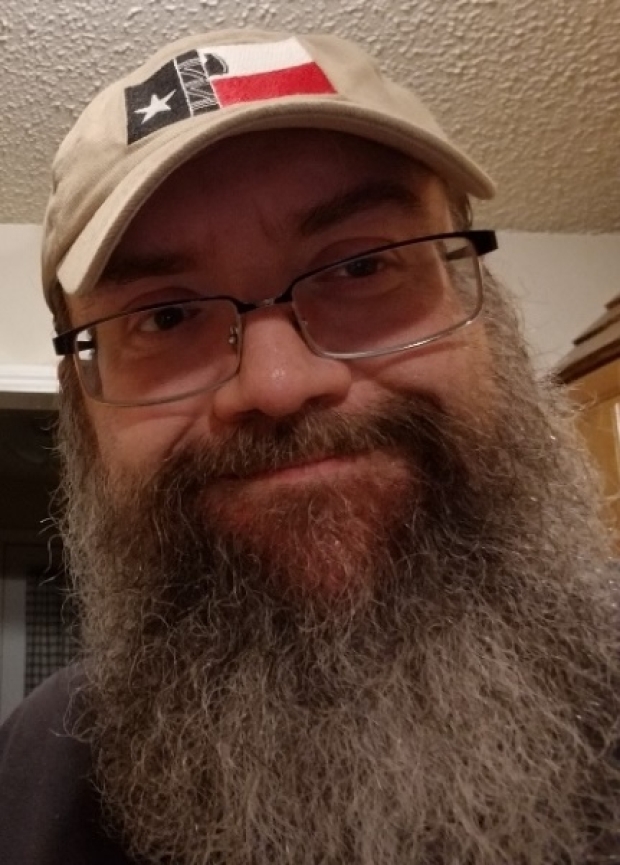 At a private post-Unite the Right gathering, Ray delivered a violent anti-Semitic speech he called “This is Our War,” which he attributed to Anglin:

My brothers, you stand here as the last line of defense against an ancient force of evil which seeks to erase the European man from history. The Jew has been drinking our blood for millennia and now this monster rules over us as a brutal slave master. Slowly exterminating us, they bury us in brown sludge. They feed us drugs. They send us to die in their wars. They auction our women off to animals.  Not only do they intend to exterminate us they intend to make it as though we never existed. So they have their history make our heroes into villains.  They claim our accomplishments as their own. They tear down the statues of our ancestors who shed blood so that we may live. The all-consuming darkness surrounds us now.  You, my brothers in arms, stand at the sole remaining lines of Western Civilization. You have been slated to be the last generation of white men.  They believed that we were down. They were throwing the last handfuls of dirt on our grave. But we have stood up. We have climbed up out of the grave and now when you stand here today, united as brothers, united as one, ready to tear down the system that was designed to destroy us all. A day is quickly coming. When it is we who will be digging graves.

In September 2017, a month after Unite the Right, Ray and several dozen other white supremacists, including SBC members and Rousseau’s newly formed group, Patriot Front, participated in a flash mob demonstration outside an Anarchist Book Fair in Houston, Texas. Using a megaphone, Ray harangued those inside to come out and fight, and led the group in chants such as “Blood and Soil,” “F*** you faggots,” and “anti-White.”

In November 2017, in the wake of Unite the Right, the “White Lives Matter” rally in Shelbyville, Tennessee, and Richard Spencer’s speech at the University of Florida, Anglin became critical of white supremacists’ public events.  Bemoaning participant arrests, street-fighting “like violent thugs,” “costume marches” and demoralizing shouting matches with counter-protesters, Anglin wrote on the Daily Stormer that “attempts to claim the public square right now are premature in terms of the political situation and premature in terms of numbers.” He went on to say that “is it important that we take the aesthetics and tone of our internet movement, which has been so overwhelmingly popular with the young, and create a real-world analog that jives with it.”

Anglin clarified his position in a March 2018 post to the website, saying, “I am fully separating from anything to do with planned public events.” Instead, he explained, “We can focus on the culture war. The place where we were winning. We can continue to hold private meet-ups, and we can do the real-life activities which have been successful, which include fliering, banner drops and flash mobs, because these things are very low risk and they actually contribute to the goal of spreading the message.” The long game he outlined included building organizations, forming communities, getting healthy, getting good jobs, getting people elected and building political organizations.

With these new directives, Robert Ray has revamped the SBCs by establishing rules and guidelines, as well as a vetting process for chapters and members. The rules exclude women, prohibit members from using their real names (in person and online), and mandate a uniform of red New Balance sneakers, jeans, a white t-shirt, and an American flag themed bandana. 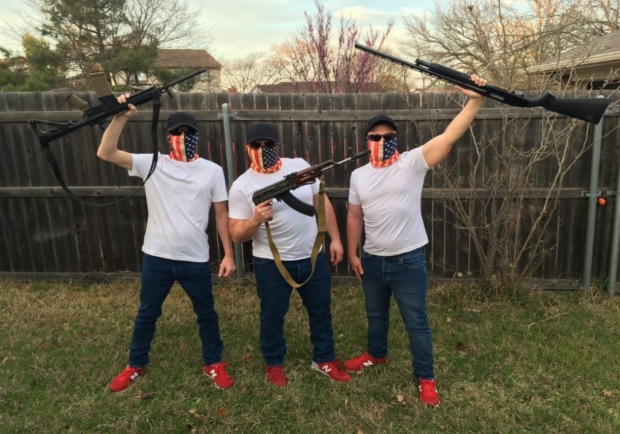 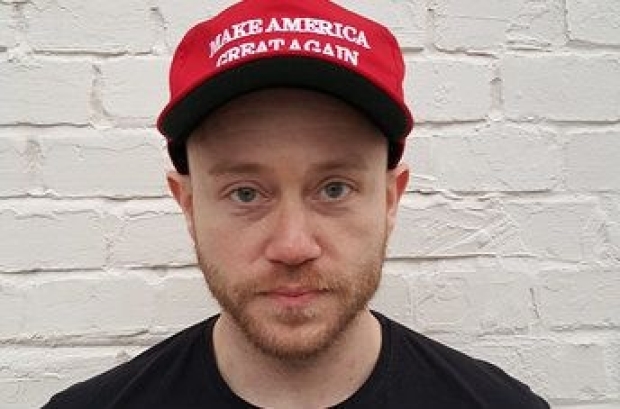 Despite a long history of exalting Hitler and neo-Nazi (National Socialist) views, Daily Stormers began claiming an American Nationalist ideology in 2017. In an attempt to validate this leap from casting themselves as neo-Nazis to American flag-waving patriots, they argue that because the United States was founded on anti-Semitic and racist principles, supporting the country is synonymous with support for white supremacist ideology.

This view first emerged on the Daily Stormer in October 2017, when Benjamin Garland began posting a series of articles on the website claiming that the beliefs of the alt right are virtually identical to the beliefs of America’s Founding Fathers. He described the Founders as “race realists” who created America as a white patriarchy in which women could not vote and black people did not have full citizenship.

In March 2018, Garland wrote, “America back then was still a traditional, wholesome white society. Degeneracy was outlawed pretty much across the board, Jews were looked down upon and blacks, who were our primary racial problem, were more or less kept in check. So, while our ideology does indeed parallel that of the Nazis in many ways, it isn’t necessarily more German or National Socialist than it is American.”

On April 1, 2018, Anglin wrote, “everyone knows that I was a racist and a Nazi.” He adds that American Nationalism is the only way forward for the white race, and for that reason he and his staff have decided to embrace civic nationalism. He concluded, “And really, I’ve always been a civic nationalist, and was just joking about being a racist.”

Anglin also claims that his previous Nazified platform was merely a tactic designed to neutralize enemies by desensitizing young white males to the stigma attached to being called a Nazi and “to demystify the entire concept of ‘evil Nazis.’”

Despite the Daily Stormer’s purported shift away from overt Nazi imagery and memes, the website continues to enthusiastically promote anti-Semitism. Their propaganda is typically anti-Semitic in nature and has been used to target Jewish institutions.

In mid-July 2019, more than a dozen Jewish institutions were targeted with fliers -- attributed to the SBC -- referring to the Holocaust as “fake news” and claiming, “the people that lied about soap and lampshades are lying about gas chambers and ovens.”

Despite the site’s purported shift away from overt Nazi imagery and memes, the Daily Stormer continues to enthusiastically promote anti-Semitism. Their propaganda is typically anti-Semitic in nature, and has been used to target Jewish institutions.

The most recent flier distribution attributed to the Daily Stormer Book Clubs blamed Jews for the allegations of misconduct against Brett Kavanaugh and followed an October 7, 2018, post to the Daily Stormer website which claimed, “the anti-Kavanaugh movement was almost entirely Jewish in nature.”  The fliers were reportedly distributed in five different states and on seven different college campuses including the University of California’s Berkley and Davis campuses, Worcester Polytechnic Institute, Marist College, Dutchess Community College, Vassar College, and Roanoke College.

On the weekend of March 21, 2018, The Daily Stormer/SBC organized an “Operation Gun Grabbing Kikes” fliering campaign at college campuses and sporting goods stores in more than ten states.

An article posted on the Daily Stormer website described the anti-Semitic fliering campaign as an effort to “raise awareness about who is trying to take away the gun rights of good Americans, leaving them defenseless to the ugly colored hordes they are forcing into our country, against the will of the actual Americans (White people).” And to “Trigger the living hell out of Jews and their leftist acolytes.”

SBC's Anti-Semitism in Their Own Words: 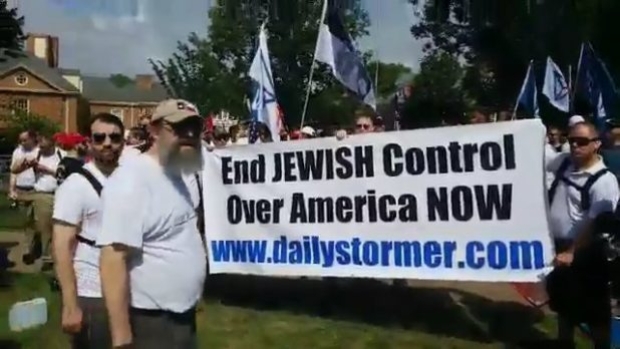 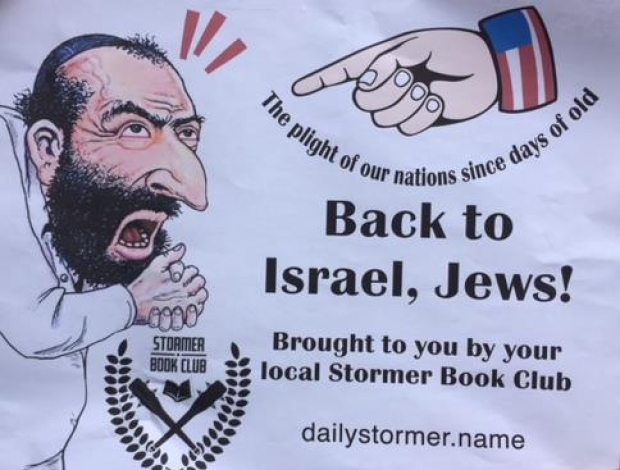 Robert Ray speaks at "Texas is Ours" rally -- Daily Stormer 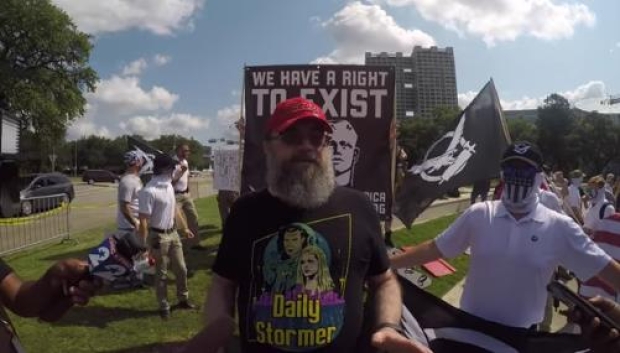