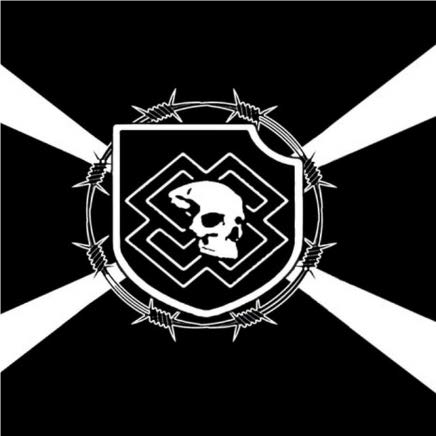 Feuerkrieg Division (FKD) is a small, international neo-Nazi organization that embraces the most extreme interpretations of white supremacist ideology. Their current leader lives in Estonia, but the group’s membership is increasingly American. The group celebrates the concepts promoted in Siege, a collection of noxious essays written by U.S.-based neo-Nazi James Mason. Even their Gab bio states “…Read SIEGE | Adherence to the Fascist Worldview.”

In a January 2019 episode of the extremist podcast The Green Pilled Perspective, “Wolfram” (one of FKD’s original spokespeople) stated, “We believe in the teachings of Siege and we just try to apply it in our own lives as much as possible.”

FKD advocates for “sacrifice” and embraces violence as a solution to “fix” the current political and cultural system, sidestepping concerns about optics and advocating for radical, systemic change.   The group criticizes and demeans other white supremacist movements, like the alt-right, for being too focused on public perception and unsuccessful in the movement’s ability to create real societal change with their tactics.

Feuerkrieg Division is heavily influenced by Atomwaffen Division, a neo-Nazi group allegedly tied to five murders across the U.S.  FKD advocates similar core beliefs, racist and vitriolic propaganda with shared graphics and general subculture.  In addition to Atomwaffen, FKD supports some of the most extreme white supremacist organizations, often referring to members of entities like The Base and Sonnenkrieg Division as comrades.

FKD embraces “Siegeculture,” a philosophy, political orientation, spiritual outlook and solution to societal problems that is dominated by hate and an embrace of violence anchored in fascist ideology.  The ideology weaves the teachings and actions of James Mason, Adolf Hitler and Charles Manson, among others, into a tapestry of extreme hate.

One of Feuerkrieg Division’s apparent goals is to create a whites-only ethno-state where citizens are able to survive off the land. They preach self-sufficiency in preparation for the anticipated societal collapse, and users often discuss plans to acquire illegal weapons, illegally modify weapons and manufacture explosives and ammunition. They offer the following advice from their Gab account, “Break away from the system and grow your own food. It is healthier and will give you a guarantee for survival in the collapse.”

Their preparation to live independent of society’s reach is coupled with a nihilistic philosophy of revolution—advocating for sabotage and destruction to hasten a collapse of the system (accelerationism). As they see it, war against a society “controlled by Jews” is inevitable.  It is also the only way to “reset” cultural and societal norms that have resulted in perceived “degenerate” values, for which they also blame Jews. 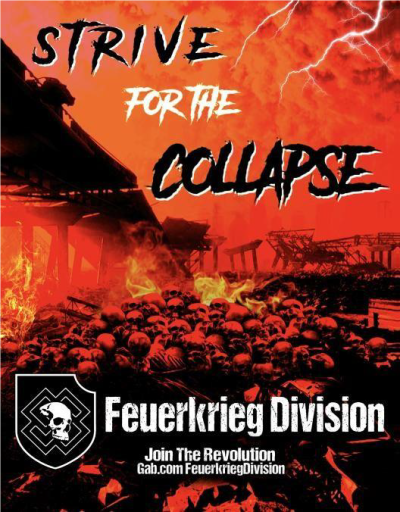 On August 9, 2019, federal authorities arrested Conor Climo, in Las Vegas, Nevada, on weapons charges. He was arraigned on allegations that he had bomb-making materials in his home and had plotted to attack Jews and members of the LGBTQ community. According to law enforcement, Climo was closely associated with Feuerkrieg Division at the time of his arrest.  Upset that FKD was potentially implicated, members responded, “Traitors like Climo will not escape alive. They will be shot on [the] spot for being a traitor to your [sic] race.” The group posted a meme of Climo being hanged, and wrote, “If I had but one bullet and were faced by both an enemy and a traitor, I would let the traitor have it.” 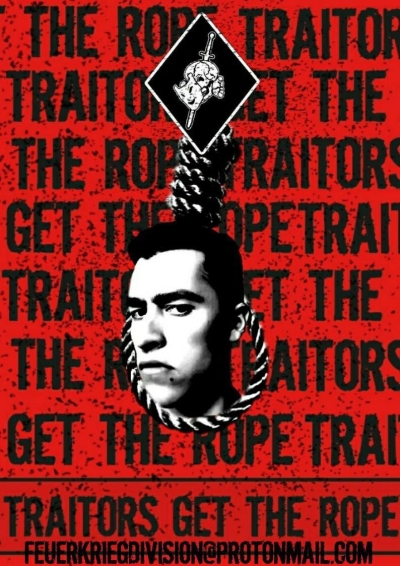 Some core FKD beliefs can be traced to the writings of anti-Semite and Hitler devotee, under the pseudonym “Savitri Devi,” who wrote extensively about Esoteric Hitlerism, which is essentially a pseudo-scholarly take on Nazi doctrine that synthesizes Hinduism with Nazism. A cornerstone of this belief is the author's claim that Adolf Hitler was an incarnation of the Hindu God Vishnu. FKD’s Gab bio prominently features a Devi quote, “Creation and destruction are one, to the eyes who can see beauty.”

FKD members honor the lives and violent actions of a range of white supremacist figures, including some of the most notorious murderers in recent history, quoting and referencing figures including Christchurch shooter Brenton Tarrant, and Charleston church shooter Dylann Roof, along with Norwegian mass-murderer Anders Behring Breivik and Oklahoma City bomber Timothy McVeigh.  One March 2019 propaganda flier states, “Enough is Enough. Christchurch is just the start.”  Other FKD fliers: “Hail Saint Bowers and Saint Tarrant! Join Feuerkrieg Division!” and “Hitler or Hell.”

FKD’s enemies include a range of ideological and symbolic targets, in addition to minority groups including Jews, African-Americans, the LGBTQ community, religious leaders and law enforcement, among others. They refer to their calls for violence as holy war, which they term “white jihad.”

They nurture deeply anti-Semitic beliefs. In one Telegram post an FKD member writes, “’Ohhhh the poor Jews,’ they say as they stab us in the back and steal our family values, mass invade us and steal our constitutional freedoms.”  In another re-post to their Telegram channel, they seem to promote violence, repeating the two-word phrase “Kill Jews” more than 35 times.

On Telegram, one of FKD’s leaders “Commander FKD” proposes his solution to address the African-American population in America: “It doesn't matter if we kill them now or in the Race War, they will still die and they will be wipped [sic] out from the face of our beautiful planet. Black Lives Don't Matter.”

They also channel their hatred towards law enforcement, whom they see as extension of a corrupt system, controlled and manipulated by Jews. Brutal depictions of violence against law enforcement are posted alongside the slogan, “Fuck the pigs.” After an arrest of one of their “comrades” by British authorities, FKD took to Telegram on September 13, 2019, to endorseviolence against law enforcement. “…The people working in these buildings are race traitors and actively enforce kike power over white men, sentencing young, white freedom fighters to hard time while n------ rape white women in the streets daily.  These pigs should be advised that we know where they work.  These places of ZOG power should be considered high value targets to any local NS [National Socialist]. They will take your life away from you and hand your country over to n------. Fuck their badges, fuck the rule of law, heil Hitler, and remember the names of these traitors.”

FKD was established in October 2018 in the Baltics, most likely Estonia. Over time, the group has expanded its footprint to include Belgium, England, Ireland, Netherlands, Norway, Latvia, Western Germany and Russia.  In 2019, FKD continued to expand their recruitment efforts in Europe and in North America, including Canada and especially the U.S. 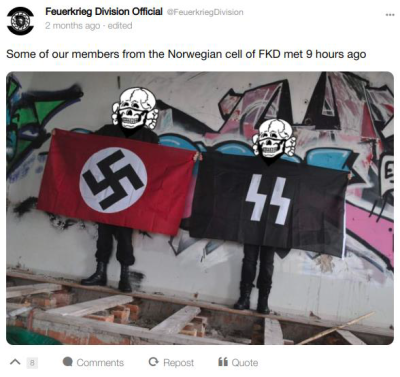 Some of their 2019 recruitment and propaganda efforts have been specifically geared to a U.S.-based audience.  In online chats, the group has actively sought out new recruits in Texas, the Great Lakes region, California, the Midwest, New Jersey, New York, and Philadelphia. The group advertised on 8chan: “JOIN FEUERKRIEG DIVISION, TRAIN AND PREPARE FOR THE COLLAPSE AND MEET UP WITH YOUR FELLOW NATIONAL SOCIALIST COMRADES.” 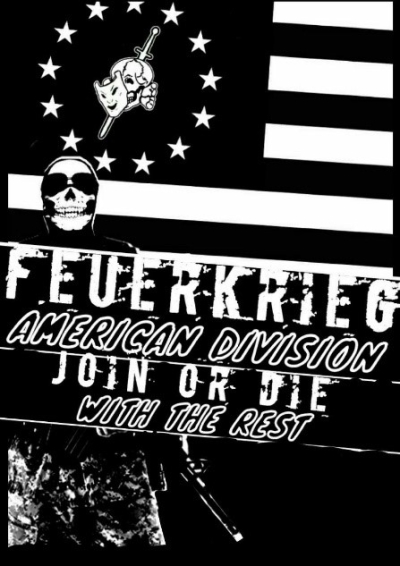 While most of their activity is online, the group has boasted of targeting communities in the U.S. and abroad with their white supremacist propaganda. Their fliers, generally in black, red, and white, include contact information and promote violence and murder with messages including:

“We are the Princes of Terror,” “We are at War,” “Our Fire Rises Only Bullets will stop us,” “The Struggle Never Ends” and “We are Warriors of Light Shrouded by Darkness.” Other fliers feature depictions of African-Americans being lynched, a Jewish man hanging from a swastika with a sign around his neck that reads “kike,” and the image of a bloodied uniformed officer alongside the words “Turn Pigs into Bacon.”