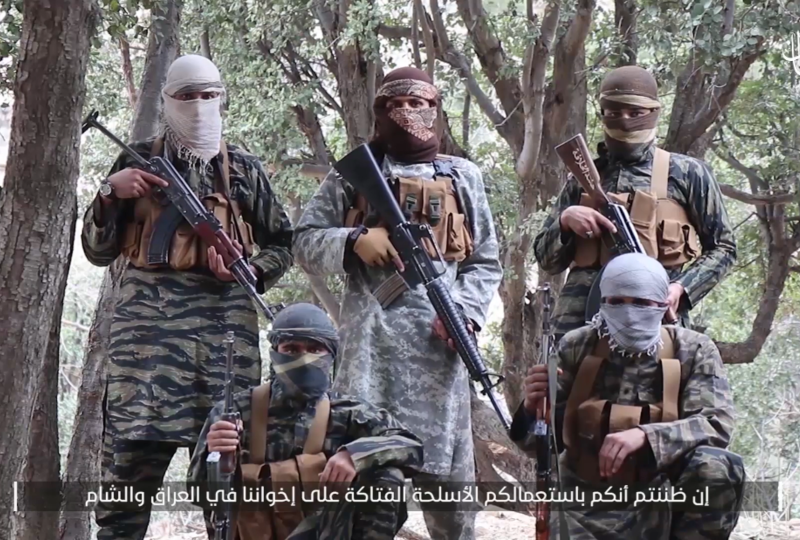 ISKP fighters featured in a June 29, 2019, video entitled “And the Best Outcome is for the Righteous”

Islamic State Khorasan Province (ISKP, also abbreviated as ISIS-K or IS-K) is an Afghanistan-based terrorist organization and official ISIS affiliate which emerged in 2014 and became an official ISIS branch in January 2015 when the group released a video publicly pledging allegiance to ISIS. Abu Muhammad al Adnani, ISIS’s spokesman, then acknowledged the video, accepted the pledge, and appointed Hafiz Khan Saeed, a former Pakistani Taliban commander, as the head of the new ISIS branch. At its peak in 2016, the group was estimated to have between 3,000 and 4,000 members. In June 2021, the United Nations assessed that ISKP had a core of between 1,500 and 2,200 fighters, dispersed into relatively autonomous local cells.

Although U.S. airstrikes have since significantly reduced the size of ISKP since its peak in 2016, it remains one of ISIS’s most active affiliates. It regularly targets civilians, particularly ethnic and religious minorities, and Afghan security forces in its attacks. Going forward, ISKP will likely seek to further entrench itself in Afghan communities, gain membership and eventually control territory. Although ISKP may support other groups planning to use Afghan territory as a base for launching international attacks, it is unlikely that it will try to launch those attacks itself, as its main objectives are apparently to strengthen its network locally and cement its relevance through continued high-profile attacks. American military and intelligence officials are split over whether ISKP will present a serious international threat going forward.

ISKP is now the focus of international attention after it successfully launched a complex, coordinated attack against the Hamid Karzai International Airport on August 26, 2021. The attack was intended to signal ISKP’s resolve and demonstrate that it is a continued threat in the region. Given ISKP’s animosity towards both the U.S. and the Taliban, the airport provided an ideal target to strike at both. The attack killed at least 170 people, including 13 US servicemembers. Although ISKP opposed the U.S. presence in Afghanistan and often targeted American forces, ISKP’s main enemy in Afghanistan is the Taliban. The two groups have a long history of antagonism: in fact, the Taliban and ISKP declared war on each other in January 2015 just after ISKP was established. ISKP accused the Taliban of drawing legitimacy from ethnic and nationalistic identifiers instead of a universal Islamist message. The Taliban resented both the accusation and the competition to its recruitment, as many Taliban fighters defected to join ISKP.

ISKP first emerged in 2014 after a series of defections from the groups Tehrik-e-Taliban Pakistan, also known as TTP or the Pakistani Taliban. A dispute over TTP’s leadership led many high-level members to flee to Nangarhar Province, Afghanistan. There, they initially formed secular gangs and extorted the local populations. Throughout 2014, ISIS expanded its footprint in Afghanistan by soliciting the loyalty of smaller extremist groups and Taliban defectors. On January 10, 2015, a coalition of the TTP defectors and other minor Afghan extremist groups publicly pledged allegiance to ISIS Emir Abu Bakr al Baghdadi. On January 26, 2015, ISIS spokesperson Abu Muhammad al Adnani accepted the group as the official ISIS branch in Afghanistan.

Most of the group’s leadership has been Pakistani, usually defectors from TTP—five of its six emirs were former TTP leadership. This contributes to the impression that ISKP is a fundamentally foreign actor in Afghanistan, which makes it challenging for ISKP to recruit from the local population. Instead, ISKP draws heavily on experienced militants from extremist groups in both Afghanistan and Pakistan. Although this tactic limits the amount of training and oversight required of ISKP leadership in its current cell-based model, in the future ISKP will likely seek to make inroads with the local population in order to increase its influence. This approach would mirror ISIS’s tactics in Syria, where ISIS would appoint foreign emirs to maintain cohesiveness between the central leadership and external provinces, while recruiting locally for low- and mid-level fighters.

The main goal of ISKP is to establish and expand Islamic State operations in Afghanistan. Afghanistan is a particularly ideologically significant region for ISIS because of a hadith stating that the war to bring about the return of the caliphate will begin in Khorasan and end in Jerusalem.

Like the rest of ISIS, ISKP identifies as a Salafi-jihadist organization which seeks to restore the conditions of the Islamic caliphate as they existed in the sixth century. Although ISKP’s vision of governance often overlaps with the Taliban’s, ISKP opposes the Taliban on the basis that the Taliban is fundamentally a nationalist group, rather than a religious one. Whereas the Taliban are likely to respect the established international borders of Afghanistan and seek to adapt how they portray their governance in return for recognition from the international community, ISKP sees the country’s borders as illegitimate and is even more dogmatically set on imposing a brutal and archaic understanding of Sharia governance than the Taliban. ‘Khorasan’ is a Persian term from the Middle Ages for the region, and includes areas of Afghanistan, Pakistan, Iran, and Turkmenistan. ISKP considers those boundaries, rather than the current internationally recognized borders, to be the correct way to view the region.