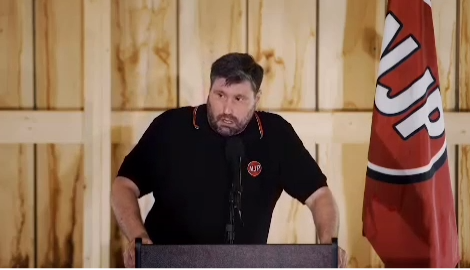 NJP Chairman, Mike Peinovich speaking at NJP event in July 2021. Various white supremacists were in attendance, including Thomas Rousseau of Patriot Front and Lucca Corgiat of the Rise Above Movement.

In August 2020, a group of white supremacists, including some who attended the 2017 Unite the Right rally in Charlottesville, Virginia, formed a new political party called the National Justice Party. Mike Peinovich, a.k.a. Mike Enoch, who runs the white supremacist website The Right Stuff (TRS), discussed the formation of the new party for weeks on his TRS podcast prior to the group’s inaugural event.

As NJP chairman, Peinovich gave the inaugural speech on August 15, 2020, at a location somewhere in the Northeast U.S. Peinovich’s virulently antisemitic speech blamed Jews for problems facing the U.S. and targeted at least one non-profit for working with tech companies to “censor” white nationalists.

Peinovich expressed a number of grievances about circumstances facing white people in America. He said, “The way I am seeing the humiliation, degradation…the violence and the attacks on not just white people, but everything we stand for, every moral value that we hold, under attack.” Peinovich also argued that “Charlottesville was important because it laid bare every issue that we are dealing with now…We saw what was coming, we tried to warn America.” Peinovich says antiracist demonstrators in Charlottesville were “allowed” to carry out violence and now they believe they have permission to terrorize white people in the streets today.

NJP is a virulently antisemitic white supremacist group that claims to be “an organization that will advocate for White civil rights, the working and middle class, and the traditional family against our corrupt and illegitimate institutions.” NJP members will “use our constitutional rights to challenge the consensus view among wealthy elites, politicians and intellectuals that White people are not a legitimate group and are not deserving of advocacy.”

The group’s purpose “is political self-determination for White Americans and the restoration of the European values upon which this country was founded.”

The group blames Jews for society’s ills, which Peinovich highlighted in his inaugural speech, saying, “The enemy is....capitalism, Zionism, the international Jewish oligarchy. These are the people that are oppressing us.” NJP stresses the achievements of white Americans, claiming “the ideas of freedom, Liberty, justice… come out of the European intellectual tradition, the European philosophical tradition,” and argues that you need a white majority in the country to maintain those ideals. The NJP opposes the Republican Party, calling it “the party of Zionism.”

NJP post on Telegram stating their policy objective for a limit on “Jewish employment in vital institutions.” The post highlights cabinet members, like Janet Yellen and David Cohen, with Jewish heritage, underscoring a long-standing white supremacist conspiracy that Jews run the government.

NJP often co-opts news stories about alleged “Black on White” crime, using examples to support their claim that the white race is under attack and that the current system is skewed so white people are charged with hate crimes, while crimes committed by Black people are swept under the rug.  NJP has held rallies and demonstrations in Fargo, North Dakota, Akron, Ohio, and Waukesha, Wisconsin, where they highlighted instances where white people are murdered by Black perpetrators, and alleged racial hate crimes or “anti-white terrorism.”

Though Peinovich did not present an official party platform at their opening event and the group has not filed an application with the Federal Election Commission (FEC), he did list some of the group’s issues. He said, “Our issues are workers' rights; a just and peaceful Foreign policy --we will work with other nations but we will bow to none; a clean environment; defense of the family, pro-natal polices -- we need to be having children again. Freedom of speech and freedom of religion. And when I say that, I don't mean religions masquerading as a supremacy strategy – I mean real religions; true immigration reform, and a legal designation of the United States as a European majority country.”

NJP blames Jews not only for American “anti-white” policies, but also for “Zionist Foreign Policy” abroad. In a party meeting on April 23, 2022, Peinovich argued U.S. involvement in Ukraine, Syria, Iraq and Serbia were led by “Jewish interest groups.” “The Jewish view of war is not one that separates combatants and civilians,” he said. “It’s not one that separates governments and people. These distinctions are not recognized when Jews go to war, or when THEY HAVE US GO TO WAR FOR THEM, it’s a war against an entire people.”

Representative Sampling of points in the National Justice Party platform:

In public recordings of NJP political meetings, speakers use black screen backgrounds to disguise their location and do not show audience members, making it difficult to identify both locations and attendees. NJP claimed that 150 people attended their fifth party event on July 24, 2021, but there are no pictures of the audience, and it is unclear how many people belong to the group. Previous NJP meetings have reportedly been held in Lancaster, Pennsylvania, in a barn allegedly owned by Charles Bausman, the founder of white supremacist conspiracy site RussiaInsider.com.

NJP was founded by a number of well-known white supremacists: 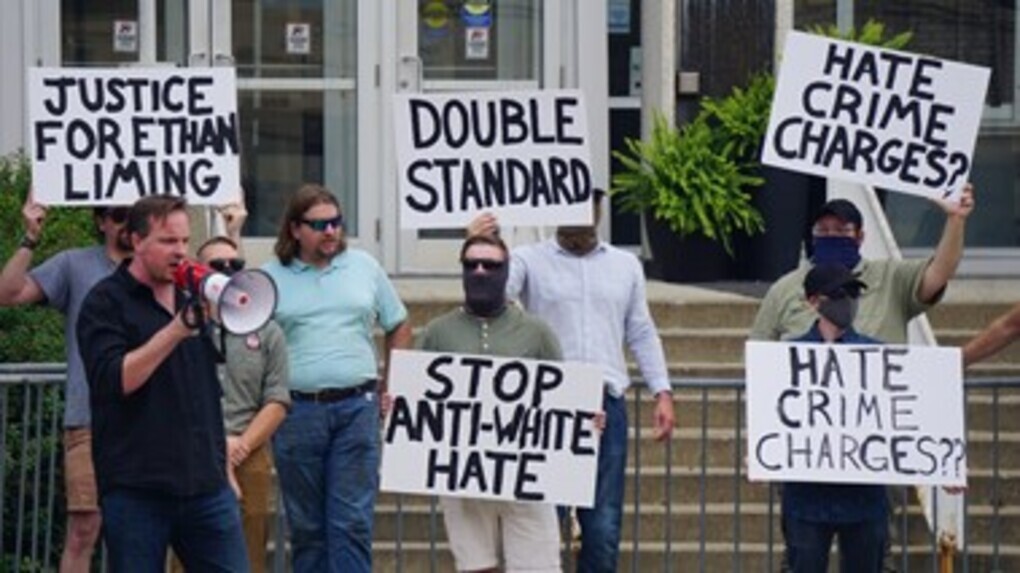 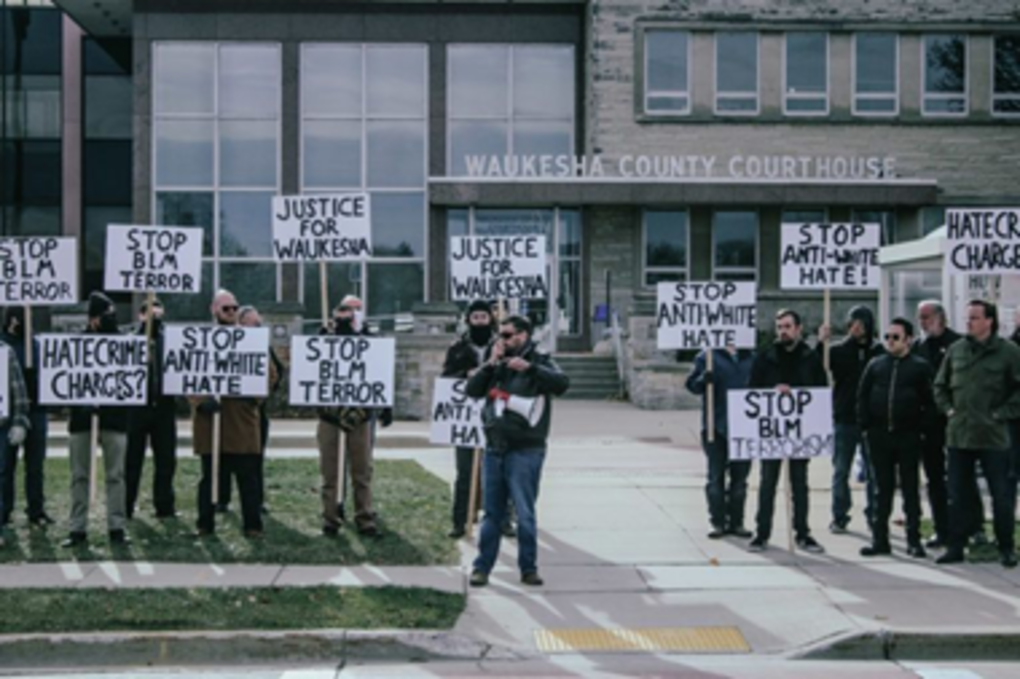