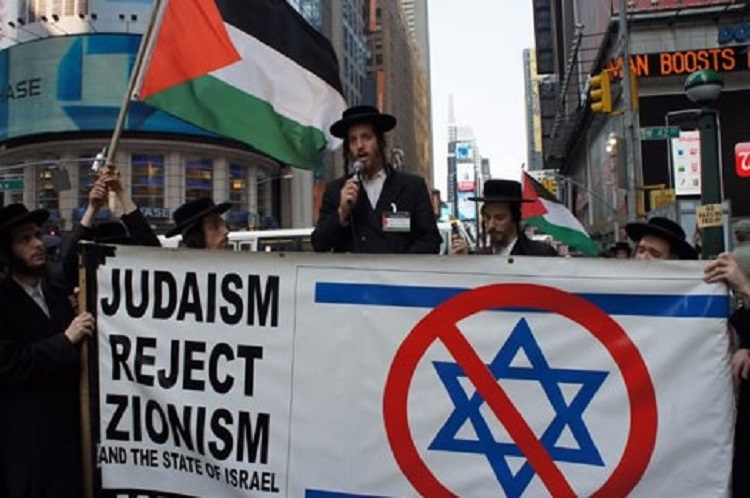 Neturei Karta (NK), an international ultra-Orthodox anti-Zionist group with a strong base of support in the U.S., views itself as the religious Jewish authority on Zionism and Israel and claims to “pray for the peaceful dismantlement of the state of Israel.”

Founded in 1938, “Neturei Karta” (Aramaic for “Guardians of the Gates”) opposes the contemporary state of Israel because it does not believe that the Jewish people have the right to self-determination and because only God can restore Jewish sovereignty in the land of Israel by bringing the Messiah. NK has a very extreme agenda and has regularly aligned with international anti-Semites, Islamic extremists and groups that advocate violence against Israel. In recent years, leaders of Neturei Karta have met with Iranian President Mahmoud Ahmadinejad on several occasions in New York and Tehran, as well as leaders of Hamas in Gaza and Hezbollah in Lebanon.

The group’s participation in a “Holocaust Review” conference in Tehran in December 2006, which was attended by a host of international Holocaust deniers, demonstrated the group’s willingness to meet with the vilest of extremists.

In 2012, leaders of Neturei Karta met with highranking Hezbollah officials on at least two occasions. In March, several NK leaders participated in a “Global March to Jerusalem” and laid a wreath at the tomb of Hezbollah terrorist Imad Mugniyeh. Then in June, some of those same leaders attended a conference in Lebanon about the IsraeliPalestinian conflict and met with Hezbollah leader Sheikh Nabil al-Kauk. Leaders of Neturei Karta also met with NK leaders in Beirut during the Global March to Jerusalem in 2012 18 Ahmadinejad while he was in New York during the UN General Assembly in September of that year.

Neturei Karta’s association with these groups for photo ops and discussions about Israel and Zionism – in which they dress in traditional Hasidic garb and are often described simply as “Jewish Rabbis” – indicate the lengths Neturei Karta is willing to go to prop up Israel’s enemies. Indeed, Neturei Karta leaders have even called on the Jewish community to dialogue with Hamas and apologize for “stealing their land.”

Leaders of Neturei Karta, specifically Dovid Feldman and Yisroel Dovid Weiss, the North American spokesperson for NK, display a commitment to proving to international Muslim and Arab audiences that Jews don’t support Israel. Both appear regularly for interviews on Al-Jazeera and Press TV, Iran’s government-run English language satellite news network. In an interview with Al Jazeera in March 2012, Weiss claimed: “Zionism has created rivers of blood...this is against the will of the Almighty and this is not what it means to be a Jew.”

This has led the more mainstream ultra-Orthodox community to join the broader Jewish community, to disavow and repudiate Neturei Karta. Indeed, Neturei Karta’s views are not in any way representative of the vast majority of the Jewish community. While these denouncements are important, it is still likely that the average passer-by who witnesses Neturei Karta’s participation at an anti-Israel protest surmises that many Jews who dress similarly agree with this position. And, while it is true that the ultra-Orthodox community largely disapproves of Israel’s secular government and liberal policies, the vast majority thoroughly abhors and rejects Neturei Karta’s ideology.

Neturei Karta’s leaders in the U.S. (most of whom are based in Brooklyn and Monsey, New York) regularly participate in anti-Israel demonstrations in order to lend a Jewish face to the protest. In interviews and at these events, NK leaders have not held back in their vitriolic rhetoric against the state of Israel, describing Israelis as Nazis, calling Israel a “cancer” and accusing Zionists of controlling the media.

While Neturei Karta’s primary motto can be boiled down to “Judaism does not equal Zionism,” leaders of the group also allege that a Jewish person’s support for Zionism essentially strips him of his Jewish-ness. During a protest outside a speech by Israeli Prime Minister Benjamin Netanyahu at the Council on Foreign Relations’ New York office in July 2010, members of Neturei Karta chanted, “Netanyahu is not a Jew!”

NK leaders participate in a range of anti-Israel programs and events on campus, including weeklong 19 programs like Israeli Apartheid Week, protests that took place during Israel’s “Operation Pillar of Defense” in November 2012 and as the Jewish representatives at “interfaith” events about Israel/Palestine organized by pro-Palestinian student groups on campus.

2018: Representatives of Neturai Karta met with Hezbollah in Lebanon and presented a gift for Hassan Nasrallah.

2017: Representatives of Neturai Karta attended pro-Palestinian conference in Tehran in which Iran’s Supreme Leader Ayatollah Khamenei called the Jewish state a “fake country,” “a dirty chapter in history,” and a “cancerous tumor” that should be confronted “step by step” in order to achieve “the full liberation of Palestine.”