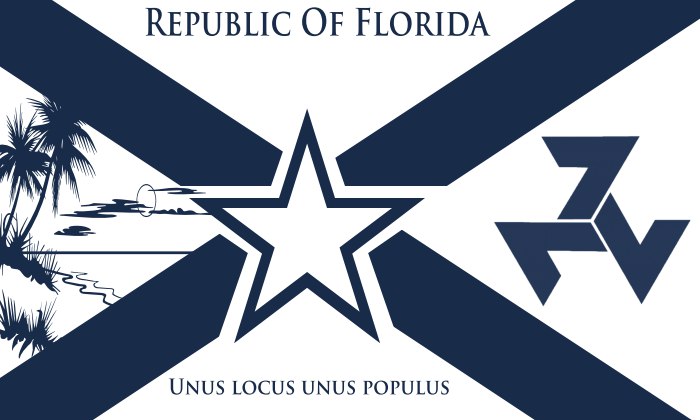 The Republic of Florida Militia (ROF) is a small, Tallahassee-based, white supremacist group that borrows paramilitary concepts from the anti-government extremist militia movement, including rank structures, training style, uniforms, and even a camouflage painted vehicle.

With the rise of the alt right movement, ROF adopted a number of alt right concepts, and could be considered an alt right-styled white supremacist group.

According to the group’s website, they “are a white civil rights organization fighting for white identitarian politics, and the ultimate creation of a white ethno-state.” The website also explains that ROF’s short-term plan is to recruit young whites, withdraw to majority-white areas, and create communes.

ROF is led by convicted felon Jordan Jereb, who started the group in 2014. The group has struggled to gain followers and traction outside of its Tallahassee-area membership, but also has a small following in South Florida, including League of the South member Chris Cedena.

In a June 2017 Youtube video, Jereb claims the group is patrolling the streets to “combat a crime wave of illegal immigration and gang culture.”

ROF members have developed relationships and associations with other extremist groups, including Vinlanders Social Club, League of the South, Atomwaffen, and the Traditionalist Worker Party.

ROF occasionally joins events organized by other white supremacist groups.  ROF associates also joined League of the South demonstrations in Tallahassee in both 2014 and 2015.  In an October 2017 post on vk.com, Jereb announced his plans to attend additional extremist events. “Once I’m off probation I will be attending every single rally across the country,” he wrote.

In addition to participating in the League of the South events, Jereb met with Traditionalist Worker Party leaders Matthew Heimbach and Matt Parrott in September 2017 “to find ways to work together.”

While the group does not have a significant history of violence, members have often used violent language. Jereb was arrested in 2016 for threatening a staffer in the office of Florida governor Rick Scott. In 2014, before he founded ROF, Jereb wrote on social media that “the traitors of my country (Florida) will be hung in our courts.” Jereb also refers to violence on his social media sites.

In January 2018, Jereb posted an image to vk.com of Norwegian neo-Nazi mass murderer Anders Breivik and wrote, “This man is a hero. Period.”  Jereb continued, “He opened fire on a far-left summer camp…The future of Norway is going to be brighter because of Breivik.”