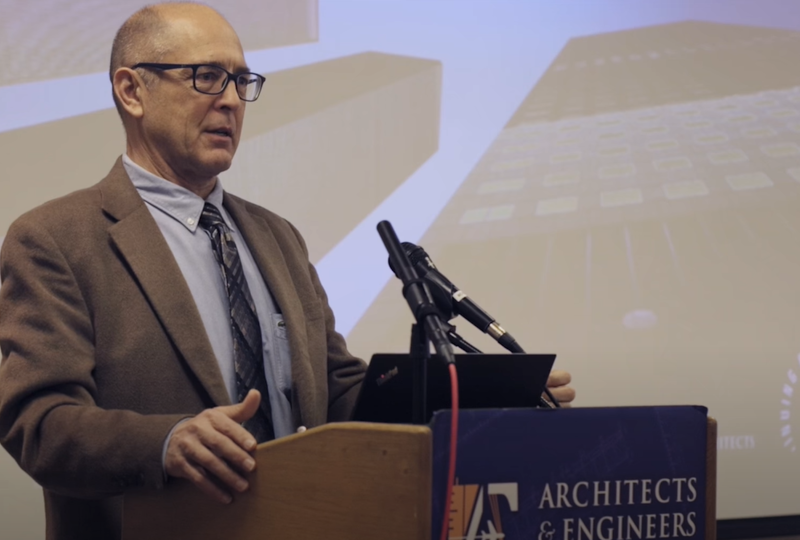 Update: In early September 2021, AE911Truth’s board voted to remove Richard Gage from his position as the organization’s CEO, citing controversy generated by his “off-mission” (Covid-19-related) comments that were highlighted in a Slate article about Spike Lee’s 9/11 documentary, “NYC Epicenters 9/11-2021 ½.” Lee recut the documentary’s final episode following public backlash for providing a platform to AE911Truth in the show, removing all footage featuring the organization. Gage plans to remain involved in the 9/11 truth movement, writing in an online post that he “will never quit as a 9/11 truth leader” and that he is “not in competition with AE911Truth.” He has since launched his own website and video podcast series.

Richard Gage formalized his association with the 9/11 truth movement in 2006, when he founded Architects & Engineers for 9/11 Truth (AE911Truth), which promotes the conspiracy theory that the World Trade Center was destroyed in a controlled demolition, and claims to represent more than 3,000 architects and engineers who want a “real investigation” into the 9/11 attacks.

Unlike many other 9/11 conspiracy theorists, Gage and AE911Truth have generally avoided identifying the “real” perpetrators responsible for the 9/11 attacks, stating on the organization’s website that it’s “beyond the scope of AE911Truth to speculate on these issues.” Instead, Gage focuses his efforts on gathering and sharing “technical evidence” that proves the World Trade Center was destroyed in a controlled demolition, such as eyewitness accounts of explosions and the “discovery” of nano-thermite (an explosive compound) in the debris. These claims have been repeatedly debunked by scientists.

More recently, AE911Truth has promoted a University of Alaska Fairbanks study, published in 2020, which concludes that fire did not cause the collapse of World Trade Center Building 7 (WTC 7) on 9/11, contrary to the findings of the National Institute of Standards and Technology (NIST). AE911Truth funded the research, which is highlighted in an AE911Truth feature documentary about WTC 7 released in December 2020.

While Richard Gage doesn’t have a history of explicit antisemitism, he has appeared on multiple podcasts and at conferences where other speakers have promoted conspiracy theories blaming Jews and/or Israel for the 9/11 attacks.

In 2017, he spoke at the Nation of Islam’s Saviours’ Day celebration as part of a panel titled “The War on Islam: 9/11 Revisited, Uncovered, & Exposed.” The panel, which featured well-known antisemites and 9/11 conspiracy theorists Kevin Barrett and Christopher Bollyn, alleged that Jews were behind the 9/11 attacks. The Nation of Islam and its leader, Louis Farrakhan, have a well-documented history of antisemitism. Gage also spoke at Saviours’ Day in 2012 and did an interview with NOI’s Research Group in 2016 as part of an interview series with 9/11 conspiracy theorists.

In May 2021, Gage appeared on the online show "Conspiracy Castle” where the host suggested Israel “has a database that collects all of our phone calls” and that Israel “benefited” from the 9/11 attacks, saying “it’s pretty obvious who the players were, do[n’t] you think so?” Gage seemed to endorse the host’s claims, nodding his head in agreement and responding, “I don’t name players because I haven’t done that research, but it’s not too difficult to figure it out.” In July 2021, Gage appeared on “American Media Periscope,” during which two fellow panelists discussed Israel and Mossad’s involvement in the 9/11 attacks. In a 2019 podcast appearance, Gage encouraged listeners to read Christopher Bollyn’s book, Solving 9/11, which claims the 9/11 attacks were orchestrated by Israel and the Jews, calling it “valid research.”

In 2019, AE911Truth, along with the Lawyers’ Committee for 9/11 Inquiry (another 9/11 conspiracy theorist group) and a relative of a 9/11 victim, filed a federal lawsuit seeking to force the FBI to share evidence it gathered during the detention of five individuals commonly referred to as the “Dancing Israelis.” Some 9/11 conspiracy theorists believe that the five Israelis directed the attacks and began dancing when they realized their mission of creating a “false flag” operation had been accomplished. “We are keenly interested in compelling the FBI to address the evidence regarding the five men arrested in New Jersey because of the potential that explosive traces were present in the van,” AE911Truth’s press release reads. “Our goal is for the FBI to report the results of any tests for explosive residues that were performed, as such results may shed further light on how the World Trade Center Twin Towers and Building 7 were destroyed.”

Alongside his frequent podcast and speaking engagements, Gage also hosts a weekly webinar series on AE911Truth’s social media accounts where he shares “evidence” that “proves” the World Trade Center was brought down in a controlled demolition. He was also featured in the conspiratorial 9/11 documentary, Loose Change, released in 2009. More recently, Gage has peddled conspiracy theories about the Covid-19 pandemic, claiming it is a “false flag operation.”

In August 2021, Slate reported that Gage and AE911Truth featured prominently in the final episode of filmmaker Spike Lee’s HBO upcoming documentary, “NYC Epicenters 9/11-2021 ½,” which explores the impact of the 9/11 attacks and Covid-19 pandemic on New York City. Responding to backlash for providing a platform to 9/11 conspiracy theorists, Lee announced he is re-editing the episode. It is unknown whether Gage or AE911Truth will be featured in the final cut of the episode, which is set to be released on the 20th anniversary of the attacks.

In His Own Words

Below is a sampling of Richard Gage’s conspiratorial claims.