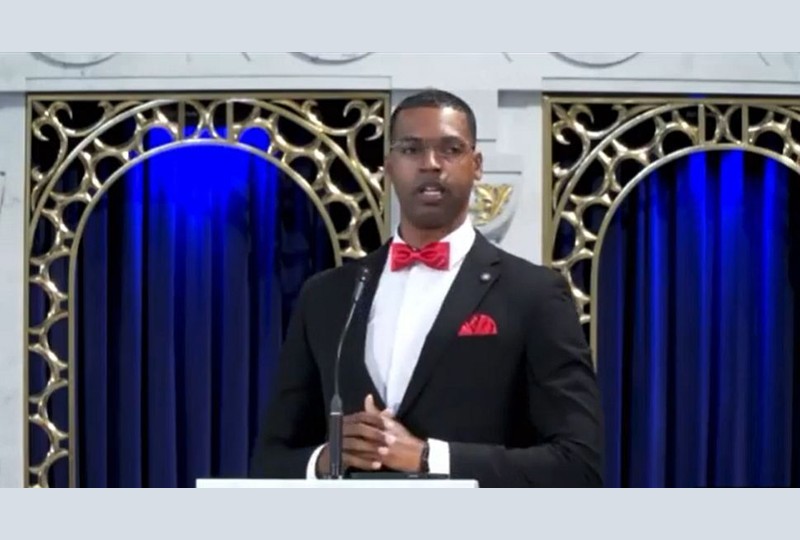 Rizza Islam speaking at the Nation of Islam’s 2021 Saviours’ Day conference at Mosque Maryam in Chicago.

Ronnie Steven “Rizza” Islam is a Nation of Islam (NOI) member and social media influencer. He describes himself as an “activist, speaker, humanitarian,” and “Black intellectual xtremist” [sic]. Mr. Islam has over a half million followers across multiple Instagram accounts, in addition to tens of thousands of followers on Twitter, Facebook, and YouTube. He intersperses his posts with inflammatory content that regularly includes antisemitic, anti-LGBTQ and anti-vaccine rhetoric, in addition to a range of other conspiracy theories.

In 2019, Mr. Islam published a book titled “Message to the Millineals” [sic], which was inspired by former NOI leader Elijah Muhammad’s 1965 “Message to the Blackman in America.” He is a member of the Fruit of Islam, NOI’s all-male paramilitary and security wing. Since becoming an active NOI member in the mid-2010s, Mr. Islam has become one of NOI leader Louis Farrakhan’s staunchest defenders against frequent allegations of antisemitism and other criticism.

Rizza Islam’s most common claims include popular NOI talking points and other offensive tropes and conspiracy theories, including:

For years, Mr. Islam has been a vocal anti-vaxxer. He has often collaborated with prominent non-NOI anti-vaxxers, including participating in anti-vaccine conferences and rallies, such as when he spoke at a March 2021 protest outside the Centers for Disease Control and Prevention (CDC) headquarters in Atlanta. He also sells merchandise branded with his name and anti-vaccine messaging.

Since the outbreak of the coronavirus pandemic, Mr. Islam has been particularly focused on promoting conspiracy theories and disinformation related to COVID-19 and the COVID-19 vaccine. Early in the pandemic, he posted a conspiracy theory suggesting that the coronavirus was being used to target Black celebrities. Mr. Islam has made numerous false claims about the COVID-19 vaccine causing harm or death, and he has repeatedly asserted that the COVID-19 vaccine is part of a depopulation plot targeting Black people. Another common theme in his anti-vaccine commentary is the disproven claim that mRNA vaccines alter a person’s DNA.

History and Rise in the Nation of Islam:

Rizza Islam was born in Compton, California, in 1990. He was a member of the Nation of Islam and attended the local NOI mosque as a young child, though he also became involved in the Church of Scientology. His mother, Hanan Islam, and his adoptive father, Alfreddie Johnson, were the executive director and founder, respectively, of a Scientology-backed nonprofit organization called World Literacy Crusade. Mr. Islam took on various roles within the organization throughout his teenage years.

In the mid-2010s, Mr. Islam and his family ran into legal trouble stemming from their involvement with Scientology and World Literacy Crusade. Mr. Islam, along with some of his siblings and his mother, were arrested on Medi-Cal fraud and insurance fraud charges in California in 2015. In recent years, Mr. Islam has largely downplayed references to his Scientology past.

Though Mr. Islam had participated in NOI-related events previously, including training Fruit of Islam members while working at World Literacy Crusade, it was around the time of his 2015 arrest that he became a more active NOI member. His association with Scientology and preestablished relationships within NOI likely contributed to his rapid rise within the organization’s ranks. World Literacy Crusade and its associates, including Johnson and NOI’s Tony Muhammad (Farrakhan’s Western Regional Representative and Rizza Islam’s mentor at NOI’s Los Angeles mosque), played a key role in forging an unlikely relationship between Farrakhan, NOI and Scientology in the 2000s. 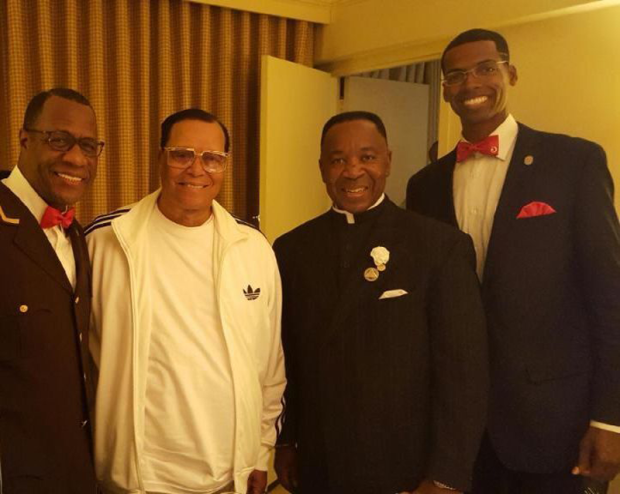 Under Tony Muhammad’s guidance, Rizza Islam gained prominence within NOI. He met with Farrakhan on multiple occasions in 2015 and 2016 as part of his work with anti-vaccine activism and promoting peace between rival street gangs in Los Angeles. Mr. Islam helped establish what would become a long-term partnership between anti-vaccine advocates like Robert F. Kennedy, Jr. and the Nation of Islam, after he introduced Kennedy to Muhammad and Farrakhan in 2015. More recently, Kennedy and Muhammad served as co-producers for a new anti-vaccine documentary, which premiered at NOI’s 2021 Saviours’ Day conference.

Despite his relative youth, Rizza Islam has proven himself to be a force not only on social media, but within NOI itself. In February 2021, a few weeks shy of his 31st birthday, Mr. Islam shared the stage with longtime NOI leaders like Student Minister Ishmael Muhammad and Dr. Ava Muhammad at the group’s annual Saviours’ Day conference.

Louis Farrakhan singled out Mr. Islam for praise at this event. “When I saw Brother Rizza,” Farrakhan told the audience during the keynote address, “I knew he was good-looking, but that boy was absolutely beautiful. And I listen to his carriage and his handling of the subject matter—he's excellent as a potential great minister of the Honorable Elijah Muhammad.” 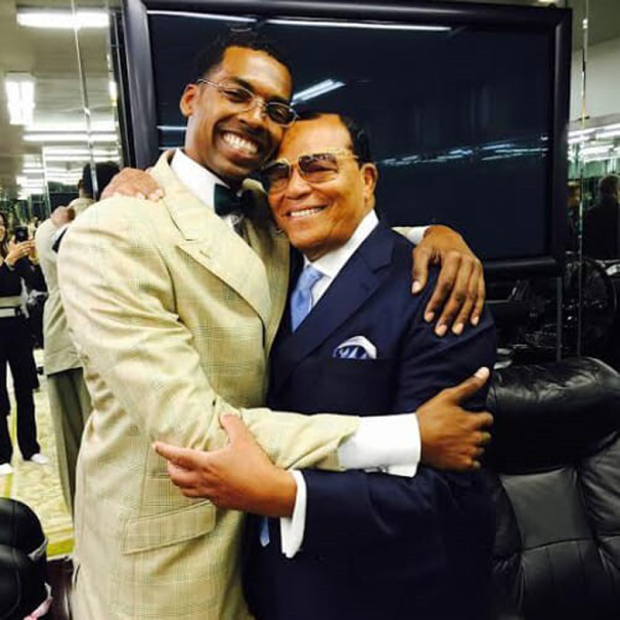 Rizza Islam and Louis Farrakhan in Chicago in 2015. (Source: Facebook)

Rizza Islam’s influence and connections have also spread into the mainstream. He has been quoted and praised by various Black rappers, actors, athletes and others; rapper Royce da 5’9” thanked Mr. Islam on a track from his 2020 album, The Allegory, and Snoop Dogg praised him on Twitter in 2016 for “saving lives and educating while elevating the people.”

Mr. Islam has also posted photographs of himself with many other prominent celebrities, such as Jay-Z and Chris Brown. In 2020, Mr. Islam made multiple antisemitic statements during an appearance on the popular TIDAL and Revolt TV program, “Drink Champs.” He has been recognized by various organizations, such as the Los Angeles City Council, for his work as a community activist, before and after he became an active NOI member.

In His Own Words:

Below is a sampling of Rizza Islam’s extensive history of bigoted statements. 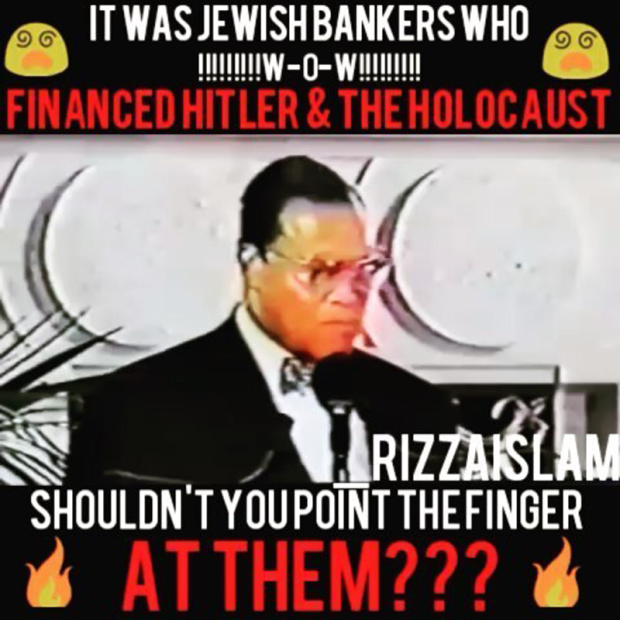