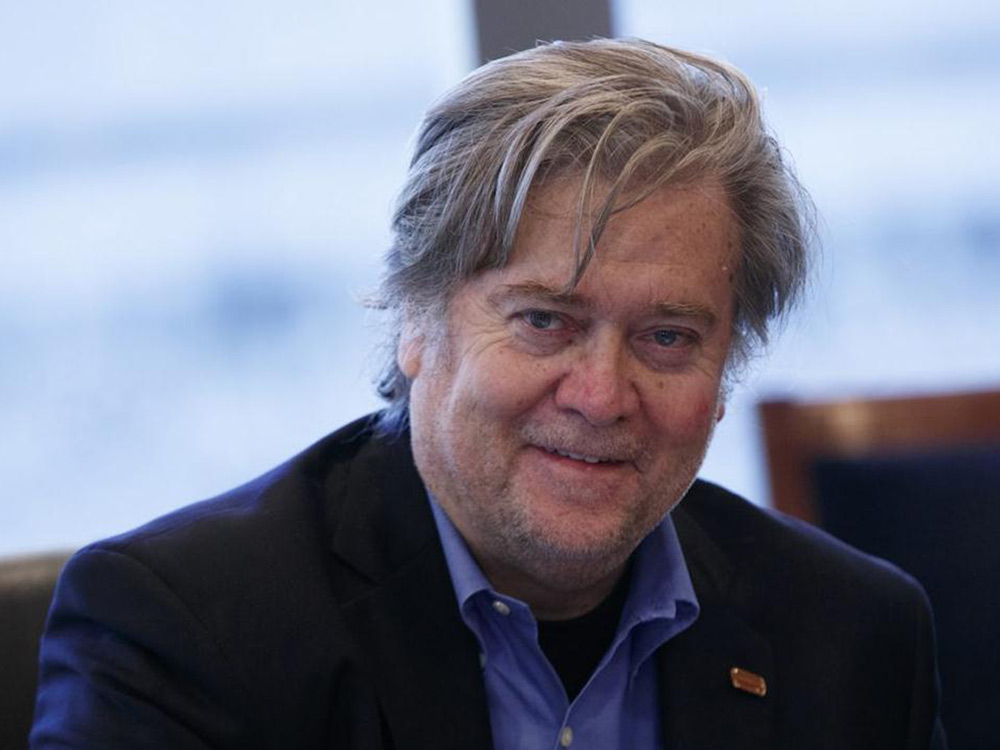 1. BANNON IS A MAJOR INFLUENCER ON THE FAR RIGHT

Steve Bannon is a far-right political provocateur, constantly telling his supporters that mainstream media and leaders hate them and that their activism is “an act of populism.” Since leaving the Trump administration as its chief strategist in August 2017, Bannon has become a de facto spokesperson for the far right in the United States. In 2020, he created a podcast, “War Room: Pandemic,” aka “Bannon’s War Room,” which attracts millions of listeners daily.

Bannon initially promoted conspiracy theories about the Covid pandemic, but after the November 2020 presidential election, he focused on conspiracies promoting election fraud. He invites numerous figures on the right and far right on his show and has encouraged listeners to take over election boards and school boards in their communities.

In December 2021, The Daily Beast reported that Bannon said that he and his associates “would take over the entire ‘election apparatus’ in the United States,” adding, “We are going to get it decertified,” referring to the 2020 presidential election. On his podcast, Bannon consistently criticizes the mainstream media and declares that the Biden administration is illegitimate and run by radicals. Bannon refers to his push to declare the 2020 election illegal as the “three November movement.”

Due to his promotion of disinformation and threats of violence, Bannon has been banned on Twitter and YouTube. In November 2020, he called for the beheading of Dr. Anthony Fauci, director of National Institute of Allergy and Infectious Diseases and Christopher Wray, head of the Federal Bureau of Investigation.

Bannon first gained public attention as the editor of the right-wing online publication Breitbart, a position he started in 2012. In August 2017, after Bannon was dismissed from his duties at the White House, he resumed his position as executive chairman at Breitbart News. He stepped down five months later after Michael Wolff’s book “Fire and Fury” revealed his controversial statements about Trump family members. Bannon also reportedly had disagreements with financial backers of the publication

When he was  the editor of Breitbart, Bannon expressed his enthusiasm for the alt right, a loose network of individuals and groups that promote white identity and reject mainstream conservatism in favor of politics that embrace implicit or explicit racism, antisemitism and white supremacy.

Bannon “proudly” told a Mother Jones reporter at the 2016 Republican National Convention “we’re the platform for the alt right,” referring to Breitbart News. In the same interview, Bannon denied that the alt right is inherently racist or antisemitic.

When President Trump named Bannon as his chief strategist, numerous well-known white supremacists celebrated the appointment. David Duke called the selection of Bannon “excellent,” adding that Bannon was “basically creating the ideological aspects of where we’re going.” Peter Brimelow, who runs the racist site VDare, said that the Bannon hire was “amazing.”

Jared Taylor of American Renaissance, Brad Griffin of Occidental Dissent, and Rocky Suhayda of the American Nazi Party predicted that Bannon would help hold Trump to his campaign promises on immigration. While in the White House, Bannon reportedly reached out to far-right political figures, including France’s Marine Le Pen. In November 2016, she tweeted that he had invited her to work in concert with the new Trump administration.

2. BANNON CHAMPIONS NATIONALISTS IN THE US, EUROPE AND ELSEWHERE

Bannon has backed numerous far-right political candidates and parties in the U.S. and Europe.  In 2017, he supported Roy Moore, a controversial Republican candidate who ran for the U.S. Senate in Alabama.  Moore is known for putting a monument to the Ten Commandments in the state judicial building in Montgomery and for allegedly sexually assaulting a number of women and girls.

Throughout 2018, Bannon, met with far-right European leaders from Germany, Italy Switzerland, France and Serbia. He told the New York Times in March 2018 that he wanted “to build a vast network of European populists to demolish the Continent’s political establishment.” Most of the leaders and parties he embraced have taken an anti-immigrant, anti-globalism stance.

That same month, Bannon spoke at a meeting of the far-right National Front in France, where he told attendees, “Let them call you racists. Let them call you xenophobes. Let them call you nativists. Wear it as a badge of honor.”  Bannon has also called Viktor Orban, the authoritarian leader of Hungary a “hero,” despite Orban’s attack on democratic institutions in his country.

In 2018, along with British politician Nigel Farage’s former aide, Raheem Kassam, Bannon attempted to form a Brussels-based organization called “The Movement” to undermine the European Union.  Bannon told the Daily Beast in August 2018, “Right-wing populist nationalism is what will happen. That’s what will govern,” One of the first leaders to join The Movement was Matteo Salvini, the leader of Italy’s anti-immigrant party, The League. Bannon, in conjunction with a conservative Catholic think tank called the Human Dignity Institute, also attempted to buy a medieval monastery in Italy that would serve as an academy for training far-right leaders but the Italian government would not allow the purchase to take place.

Bannon’s efforts to build a far-right network in Europe fell apart in 2019, after he was unable to drum up support from right-wing leaders and a number of far-right candidates lost in European elections.

3. BANNON IS A FIERCE CRITIC OF THE REPUBLICAN ESTABLISHMENT AND THE LEFT.

Bannon, who has held positions at Goldman Sachs and Affinity Media, was also the co-founder of the Government Accountability Institute (GAI), whose stated mission is “to investigate and expose crony capitalism, misuse of taxpayer monies, and other governmental corruption or malfeasance.” He has produced and financed a number of documentary films on right-wing figures, including Ronald Reagan and Sarah Palin.

Today, Bannon is largely dismissive of traditional Republicans. Instead, he advocates a brand of American nationalism and wants to advance a “global populist movement” that will challenge the current political establishment in the U.S. and Europe.

An August 2016 article in The Atlantic cites Bannon’s promotion of a populist uprising against the GOP establishment. He told a gathering of conservatives in 2013, “We don’t believe there is a functional conservative party in this country and we certainly don’t think the Republican Party is that. It’s going to be an insurgent, center-right populist movement that is virulently anti-establishment, and it’s going to continue to hammer this city, both the progressive left and the institutional Republican Party.”

In an interview about his 2010 film, “Fire from the Heartland: The Awakening of the Conservative Woman,” Bannon lauded conservative women like Michele Bachmann and Ann Coulter, saying, “These women cut to the heart of the progressive narrative. That's one of the unintended consequences of the women's liberation movement––that, in fact, the women that would lead this country would be feminine, they would be pro-family, they would have husbands, they would love their children. They wouldn't be a bunch of dykes that came from the Seven Sisters schools."

4. UNDER BANNON, BREITBART PUBLISHED INFLAMMATORY PIECES ABOUT WOMEN, MUSLIMS, AND OTHER POPULATIONS.

Bannon had been on leave from Breitbart since August 2016 when he took over as CEO of the Trump campaign, and he resumed his job as Breitbart’s executive chairman from August 2017 until January 2018. In Bannon’s absence, the right-wing “news” site continued to publish a stream of inflammatory “stories.”

Many of the Breitbart headlines published under Bannon’s tenure demonstrate a virulently anti-Muslim, misogynistic worldview, including: “Planned Parenthood’s Body Count Under Cecile Richards is Up to Half a Holocaust,” “Would You Rather Your Child Had Feminism or Cancer?” and “Political Correctness Protects Muslim Rape Culture.” As Bannon’s defenders have pointed out, these headlines are designed to attract attention and readers, and are not necessarily evidence that Bannon himself is an antisemite, a misogynist, or an anti-Muslim bigot.

That said, Breitbart News under Bannon provided a platform for anti-Muslim extremists Pamela Geller, Robert Spencer, and others. The website published a number of articles attacking the family of Captain Humayun Khan, who died while serving in Iraq, and accusing his father Khizr Khan of having “deep ties to the government of Saudi Arabia—and to international Islamist investors.” Advocating for an immigration ban that would target majority Muslim countries, which Trump suggested during his presidential campaign and attempted to enact once in office, the website called it an “‘Extraordinary, Brilliant’ Move” and published articles defending its constitutionality.

While still at the helm of Breitbart, Bannon made a number of comments about the West being at war with Islam. At a speech at the Vatican in 2014, he said, “We are in an outright war against jihadist Islamic fascism.”  During 2015 and 2016 broadcasts of the Breitbart News Daily radio show, he called Islam “the most radical religion in the world” and alleged that “Islamist sympathizers had infiltrated the U.S. government and news media,” according to an article in USA Today.

According to a report in The Washington Post, Bannon planned in 2007 to make a three-part movie that imagined radical Muslims taking over the United States and remaking it into the “Islamic States of America.”  A draft of the outline for the movie focused on “the culture of intolerance” behind Sharia law and also pointed to a “Fifth Column” made up of “Islamic front groups” as well as enablers, including the American Jewish community, which allowed for the rise of “Islamic fascism” in America.

While there is evidence that Breitbart News served as a platform for a wide range of bigotry, and there is some controversy related to reported statements from Bannon’s divorce proceedings in 2007, we are not aware of any antisemitic statements made by Bannon himself.  In fact, some of Breitbart’s Jewish employees have defended him from charges of antisemitism, and have pointed out that Breitbart Jerusalem was launched during Bannon’s tenure.

5. BANNON HAS FACED A NUMBER OF CHARGES

In August 2020, Bannon was arrested for defrauding donors in a scheme to privately raise money for building a wall along the Southern US border, a project that former President Trump promoted. Authorities said that Bannon and others involved in the scheme spent the money on personal expenses, including travel, hotel bills and credit card debt. In January 2021, before leaving office, President Trump pardoned Bannon and the charges against him were dropped.

In September 2021, the House Select Committee investigating the January 6 insurrection subpoenaed Bannon to come before the committee to ask about the role he may have played in the events of that day. Bannon refused, citing Trump’s “executive privilege.” In October 2021, Bannon was charged two counts of contempt of Congress. Bannon pleaded “not guilty.” The Department of Justice brought charges against Bannon and a grand jury indicted him in November. Bannon is currently awaiting trial.