Dissension Reshapes and Divides the Alt-Right

TWP remained active through early 2018, when the group dissolved into chaos after co-founder and leader Matthew Heimbach was arrested for domestic battery for allegedly assaulting his wife and father-in-law. In February 2021, Heimbach supposedly renounced his white supremacist beliefs, but reversed course in July 2021, returning as a “white socialist” and host of  “National Bolshevik Public Radio.”

• TWP is a neo-Nazi group whose goal is to build a national socialist ethno-state for white people.

• TWP participates in white supremacist rallies and protests around the country.

• TWP grew significantly in 2017 and now has members and active supporters around the country with its largest concentration of membership in the Midwest and Appalachian regions.

• TWP spreads their hateful and anti-Semitic propaganda online and by distributing fliers, posters, and stickers on college campuses and in city centers.

The Traditionalist Worker Party (TWP) is an Indiana-based neo-Nazi group led by Matthew Heimbach. TWP was founded in 2015 as the political arm of the Traditionalist Youth Network (TYN), a largely unsuccessful white supremacist group focused on recruiting young people.

Originally associated with the alt right, TWP now promotes a neo-Nazi ideology. In 2017, TWP joined the Nationalist Front, an umbrella organization that includes neo-Nazis, traditional white supremacists, and, to a lesser degree, racist skinheads. In a January 24, 2018 podcast, Heimbach said TWP’s mission for 2018 “is to increase the revolutionary consciousness of the white working class for the purpose of the creation of an independent white homeland in North America.”

Heimbach added, “My personal position is if the federal government could shut down and not come back that would be great because we don’t need ZOG… this is not our state we are occupied by a state run by Jews, run by capitalists, run by bankers.” 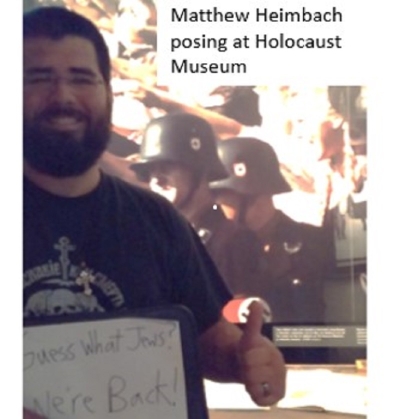 Despite TWP’s alliance with the Nationalist Front and racist skinhead crews, Heimbach continues to cultivate his relationship with alt right leader Richard Spencer. Heimbach has appeared at several public events organized by Spencer, typically flanked by a handful of TWP members.

Heimbach has long harbored hateful views about Jews.  In recent years, Heimbach’s anti-Semitism has become increasingly vitriolic and prominent in his public rhetoric.

In a Vice News interview that aired soon after the “Unite the Right” rally in Charlottesville, Heimbach claimed that opposition to the rally “proves” that “the radical left, the corporations, and the State” are on the “Jewish side” in the conflict between Jews and white supremacists.

TWP members often promote the classic “double loyalty” trope – that many American Jews’ true loyalty is to Israel, not America. The TWP platform states that “the organized Jewish community’s record of deceit, duplicity, and double-standards in lobbying against American interests within the American political system is unmatched.” On TWP’s Twitter feed, they claim that Jews control Hollywood and have committed genocide against white Europeans; they applaud the xenophobic and anti-Semitic Greek political party “Golden Dawn,” and defame Jewish holy books. Matt Heimbach has said on the record that he thinks Hitler was “a good person.”

“Bad taste isn't funny, but telling the Christ-killing kikes that National Socialists are back and we are going to dismantle their global control lock, stock, and barrel is pretty funny.” Heimbach, GAB post, February 1, 2018

“All I wanted to do was be a history teacher and crack dad jokes…but now I’ve got to deconstruct 70 years of Jewish propaganda to awaken my people, to drive the Jews into the sea and be able to build a national socialist ethno-state.  I didn’t want to do this but the Jews made it happen.” Matthew Heimbach, TWP Podcast, Jan 24, 2018

“Holocaustianity /ˈhɒləkɔːstʃiˈænɪti/: A syncretic religious belief system comprised of exaggerated and extended WWII Allied propaganda with secondary Enlightenment and Christian themes. It's the dominant religion among the Baby Boomer generation in the United States and the country's state religion.” Matt Parrott, GAB, January 15, 2018

“We worked in the mines, factories, farms, and shops to build this nation; we're not going to let any hooked nose Jews or their Gentile lackeys take it away from us.” Matthew Heimbach, GAB post, October 21 2017

Heimbach established both TWP and TYN with his father-in-law, Matthew Parrott.  William “Tony” Hovater also claims to be a co-founder of TWP.

In 2012, before founding TYN and TWP, Heimbach created the White Student Union at Towson University in Maryland, where he was a student.  He also headed a chapter of Youth for Western Civilization (YWC), a now-defunct group that straddled the line between mainstream conservatism and white nationalism. During each successive attempt to establish a group, Heimbach embraced an increasingly extreme iteration of white supremacy. Today, his vision is to create nothing less than a white ethno-state.

TWP announced a “National Socialism or Death University Tour,” slated to launch in February 2018 in Tennessee.

TWP has organized events around the country and participated in events alongside groups such as the National Socialist Movement, League of the South, Shield Wall Network, and Vanguard America. They have demonstrated against immigration, the LGBT community, women’s rights, and the removal of Confederate monuments. They have distributed their propaganda at universities in states including Colorado, Indiana, Tennessee, Georgia and Kentucky.

Charlottesville, Virginia, September 2017: Matthew Parrott was found guilty of failing to leave Emancipation Park during the Unite the Right rally on August 12, 2017. He was fined $250.

Colorado Springs, Colorado, July 2017: William Scott Planer, of Denver, was arrested on charges of vandalizing a Jewish Center in Colorado Springs. He also faces felony charges in Sacramento stemming from an alleged attack on a protester during a June 2016 rally. Following the arrest, the TWP called Planer “one of our own Sacramento Spartans” and urged supporters to contribute to Planer’s defense fund.

Washington, D.C., December 3, 2017:  Several members of TWP, along with representatives of Richard Spencer's Operation Homeland group, protested outside the White House over the Kate Steinle verdict.

Charlottesville, Virginia, May 13, 2017: TWP members participated in a white supremacist protest against the removal of Confederate monuments.

Auburn, Alabama, April 18, 2017: Heimbach and other members of the TWP acted as a security during Richard Spencer’s speech at the University of Auburn.

Sacramento, California, June 26, 2016: In collaboration with the Golden State Skinheads (GSS) and Blood & Honor America, TWP organized a “Fight for Our Nation” event. The rally degenerated into a bloody brawl when the racists were attacked by a larger group of left-wing counter-demonstrators. At least seven people were stabbed and 10 others were injured, according to news reports, Heimbach later referred to the collective group as the “Sacramento Spartans.”