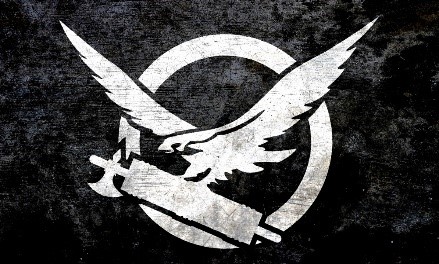 Update: Vanguard America (VA) splintered shortly after UTR and has shown very few signs of life in the years that followed. Meanwhile, Patriot Front, the VA splinter group formed by UTR participant Thomas Rousseau, is one of the country’s most visible white supremacist groups. In an effort to move away from VA’s neo-Nazi roots, Patriot Front avoids traditional white supremacist language and symbols, presenting their blend of white supremacist and neo-fascist ideology as “patriotism.” In 2020, Patriot Front was responsible for approximately 80% of the white supremacist propaganda distributions recorded by ADL’s Center on Extremism.

Vanguard America (VA) is a white supremacist group that opposes multiculturalism and believes that America should be an exclusively white nation.  Their right-wing nationalist slogan, “Blood and Soil,” romanticizes the notion that people with “white blood” have a special bond with “American soil.” This philosophy originated in Germany (as Blut und Boden) and was popularized by Hitler’s regime. VA uses “For Race and Nation” as an alternative slogan. Along those lines, the VA manifesto (as of April 2018) maintains that “The racial stock of this nation was created for white Christian Anglo/Europeans by white Christian Anglo/Europeans. All other ethnicities, races, religions and demographics are absolutely not compatible with this nation’s original culture. With such being stated, a mass exodus, isolation, apartheid, segregation and/or separation must be implemented to retain the good order and longevity of the country.”

Originally, VA (then called American Vanguard), was firmly in the alt-right hemisphere, and focused on white identity.  Over time, however, VA has increasingly embraced a neo-Nazi ideology. In one iteration of their manifesto, posted in February 2017, the VA explained that America was built on the foundation of White European culture and that the “glory of the Aryan nation must be recaptured.” VA has also warned against the influence of “the international Jew,” tweeting in July 2017, “Those behind the subversive elements eroding our culture often have something in common. Jewish influence is prevalent, invasive, dangerous.” This theme is echoed in their 2018 manifesto, which states that “Islam, Judaism and all other non-European or foreign religions” should not have the freedom to practice in the United States. 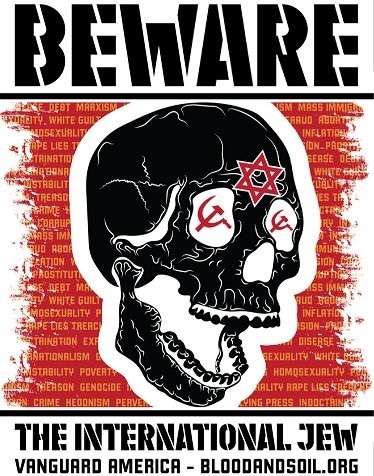 In 2017, VA broadened their ties to the neo-Nazi movement when they participated in white supremacist rallies in Pikeville, Kentucky (April), and Shelbyville, Tennessee (October). These events were organized by the Nationalist Front (NF), an umbrella organization of neo-Nazis, traditional white supremacists and racist skinheads. VA became a member of the NF following the April rally.

Dillon Ulysses Hopper (previously known as Dillon Irizarry), a Marine Corps veteran from New Mexico, has been leading the group since early 2016. During an April 2017 speech at a private NF gathering in Kentucky, Irizarry said that VA started in California in 2015. Irizarry also said that the “future is about the youth” and (for that reason) his group base is 18 to 24 years old. At the time, he also claimed approximately 200 members in 20 states. 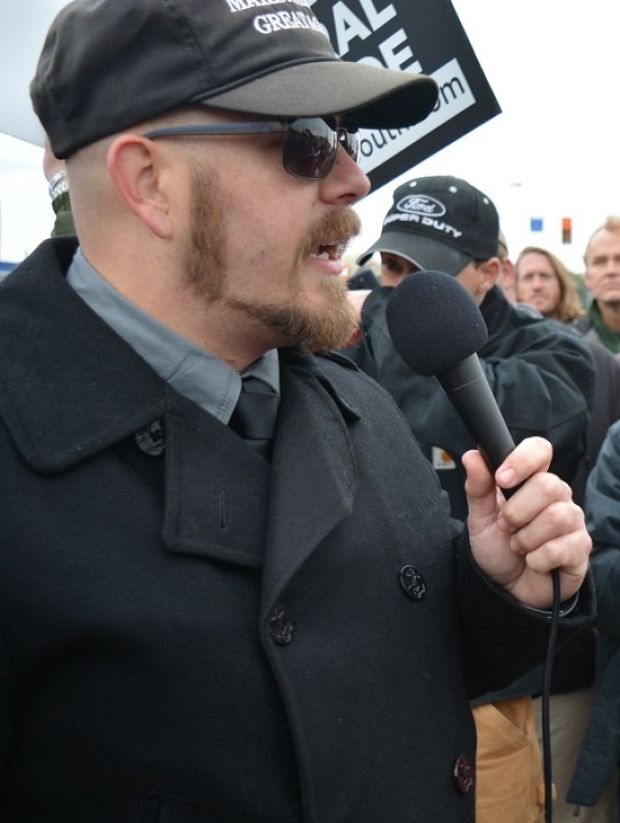 VA has some paramilitary characteristics. In states with open carry laws, members, including Hopper, who uses the title “Commander,” have openly carried firearms during rallies and protests. The standard uniform for members consists of khaki pants and a white polo shirt. At several venues, members have stood and marched in military-style formations, and utilized military facing movements and rest positions.

Membership is typically male. However, VA does have a women’s division. In June 2017, VA tweeted, “The woman has her own battlefield. With every child that she brings into the world, she fights her battle for the nation. Strong nations grow from strong families. Vanguard America Women’s Division.”

The group’s high point was June 17, 2017, when several dozen VA members participated in a “Texas is Ours” rally at the state capital in Austin. Hopper spoke at the event, and was joined by Thomas Rousseau, the leader of VA’s Texas chapter. After the event Hopper complained that Rousseau led event organizers to believe that Rousseau, not Hopper, was VA’s leader, and that Rousseau’s lengthy speech at the rally further confused people about the group’s leadership. 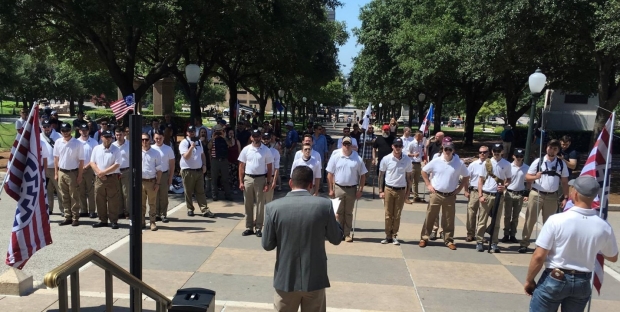 VA members stand in formation during the “Texas is Ours” rally.

A few days after the Austin rally, Rousseau began his takeover of the VA’s servers and its website. In an exchange that was posted on Twitter, Hopper detailed Rousseau’s apparent betrayal, writing, “On June 20, Thomas underhandedly and deceitfully exiled me from all Vanguard discord servers that HE controlled due to ‘security reasons.’ I logged off…and when I got back an hour later I was banned from every single server, including the women’s server. It was literally a coup with the guise that I left to handle family matters.”

Just a few weeks later, with Hopper conspicuously absent, Rousseau led several dozen Vanguard America Texas members and associates at the August 12th “Unite the Right” rally in Charlottesville, Virginia. Though Rousseau led the Unite the Right contingent, it was Hopper who faced derision in the rally’s aftermath when event images showed James Alex Fields Jr., who is accused of plowing his car into a group of counter-protesters and killing Heather Heyer, at the event standing shoulder-to-shoulder with Vanguard America members, and carrying a shield bearing the group’s fascist symbol. VA has denied that Fields was ever a member of their group.

Following the August split, Patriot Front slowly siphoned away VA members from other parts of the country, and VA membership and activity dropped off dramatically. When Hopper spoke at the October 2017 “White Lives Rally” in Shelbyville he was supported by a crew of just seven VA members. 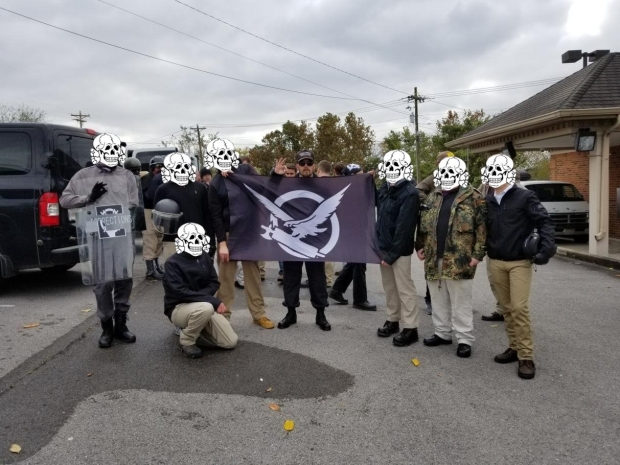 VA members pose with Hopper (center) during the Shelbyville rally.

VA was further diminished in January 2018, when more infighting and accusations of ineffective leadership led to the formation of a second splinter group, National Socialist Legion (NSL). NSL is a neo-Nazi group whose strategy (according to a March 2018 4chan post) is to set up homesteading cells around the country “for future white migration and eventual white revolt and secession.”

VA members from Texas and Tennessee played a role in NSL’s creation. As of April 2018, the ADL has documented NSL activity (mostly in the form of flier distributions) and identified members in California, Tennessee, Texas, Indiana, Florida, North Carolina and Colorado. 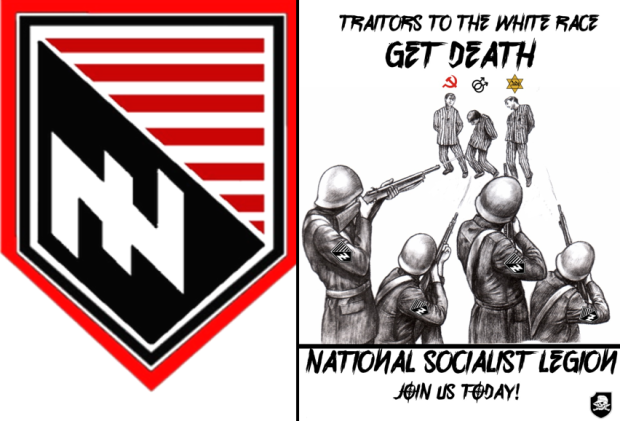 Vanguard America is best known for posting white supremacist flyers at universities across the country throughout the 2016-2017 school year; ADL counted thirty-two incidents during that time in Arkansas, California, Florida, Indiana, Maryland, New Jersey, Oregon, Texas, Virginia and Washington. The group’s campus fliering continued during the 2017-2018 school year, but to a lesser extent and with a smaller geographical reach: just fourteen incidents in Arizona, Tennessee, Texas, and Massachusetts.

In addition to distributing racist and anti-Semitic fliers on campus, Vanguard America has directly targeted Jewish and Hispanic institutions with hateful propaganda. Incidents include: 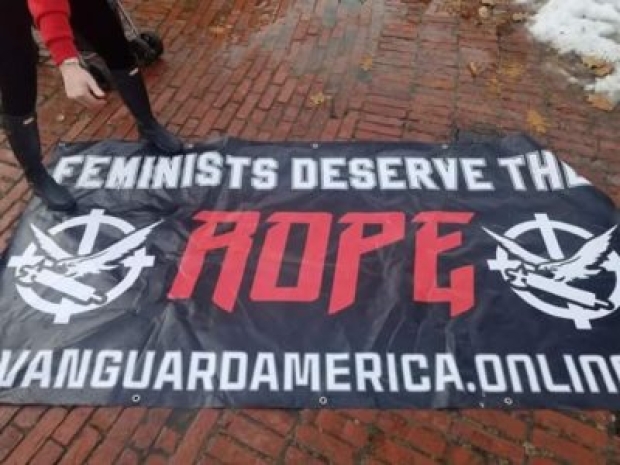