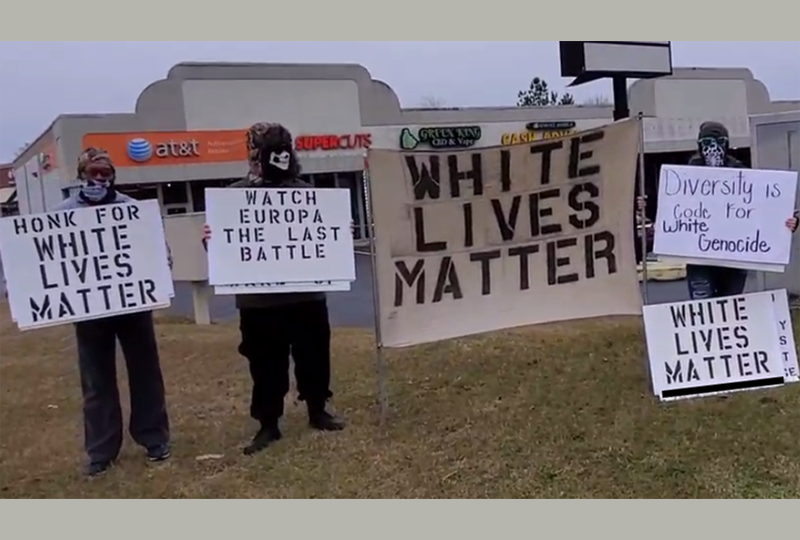 The current White Lives Matter network has coalesced around the use of this phrase. WLM promotes a white supremacist worldview, advocating for raising “white racial consciousness” and the eventual formation of white ethnostates in North America, Europe, and Australia. To promote their message, they encourage “pro-white activism” in the forms of rallies, propaganda distribution, and recruitment efforts.

This network originally began organizing on Telegram in late March 2021. On March 25, a newly created Telegram channel began advertising nationwide and international “White Lives Matter” marches scheduled for April 11. This first designated day of action was disorganized and saw relatively low levels of involvement. This is partially because of alleged antifa infiltration of some state-specific WLM Telegram channels, hijacking them to cause confusion and disrupt planning. However, WLM rallies were held in 13 states; most were small demonstrations, with only a few WLM members holding signs. The largest rally took place in Huntington Beach, California, with around 10 WLM marchers and over 100 counter-protesters, three of whom were arrested. Proud Boy Eddie Block live-streamed the protest and a man with a Totenkopf tattoo confronted counter-protesters. Another man, with a swastika tattoo on his arm, was also arrested.

Since that initial day of action, WLM has evolved into a national network of white supremacists who engage in “pro-white activism” on a designated day each month. The national WLM Telegram channel has over 11,400 subscribers, with individual channels for each state run by local administrators. The national WLM channel determines the days of action and shares propaganda materials; it is up to administrators in each state to organize their local activities. While all 50 states have Telegram channels, there are currently 28 states that maintain an active presence online and offline, staging flash demonstrations and distributing propaganda. There are also a handful of international chapters, including in Canada, Australia and the Netherlands, among others.

On their official Telegram channel, WLM administrators caution against violence and displaying overt neo-Nazi symbols at protests and in propaganda. However, individuals across WLM state channels embrace neo-Nazi rhetoric in Telegram chats, praising Hitler and Nazi Germany; using Nazi imagery in their profile pictures and posts; and espousing antisemitism. Additionally, some neo-Nazi groups, particularly in New England, California and Florida, have joined forces with WLM in their localities for activism and recruitment purposes. Neo-Nazis may also participate in WLM-related activities and sometimes display neo-Nazi symbols during WLM events.

Overlap with other white supremacist groups

Since its formation in spring 2021, the White Lives Matter network has increasingly collaborated with individuals from various white supremacist and neo-Nazi groups, including the National Socialist Movement (NSM), Nationalist Social Club (NSC), American National Socialist Party (ANSP) and Goyim Defense League (GDL). While this sort of nationwide, collaborative effort between different extremist groups is not unprecedented, it indicates that extremists are becoming increasingly anxious about perceived “threats” to white people and are willing to work together to send a message. White Lives Matter has enabled white supremacists and neo-Nazis alike to unite under a common cause – to “raise white consciousness” – despite their ideological differences. It also gives these groups a chance to introduce WLM members to more extreme views and potentially recruit them.

In Florida, the local White Lives Matter network routinely rallied alongside members of the antisemitic Goyim Defense League and neo-Nazi groups such as the National Socialist Movement, New Jersey European Heritage Association (NJEHA) and NSDAP (a small, Florida-based neo-Nazi group operating under the original name of Hitler’s Nazi party). However, WLM has also condemned these outside groups on occasion. During a November 2021 WLM rally in Orlando, members of NSM and GDL shouted racist and antisemitic slurs at people driving by. WLM Florida issued a statement in response, writing on Telegram that “several people showed up today that did not promote pro white unity. Instead, they used our event as a platform to troll and yell obscenities. We do NOT condone this behavior and will be banning anyone who does this in the future.”

Despite the threat, members of GDL and NSM continue to show up at WLM Florida rallies. Following a December 2021 rally in Deland, several participants, including GDL and NJEHA member Jason Brown, members of NSM and members of NSDAP, traveled to Port St. John to hang a banner over a highway overpass. The banner was part of a nationwide propaganda challenge issued by GDL leader Jon Minadeo. 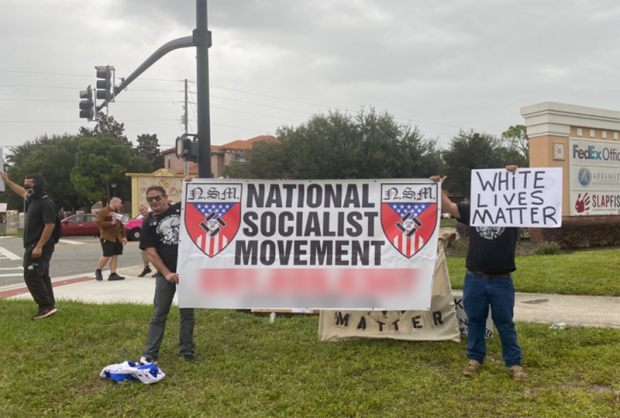 Neo-Nazi Jason Brown, left, holds up a banner for the National Socialist Movement during a White Lives Matter demonstration in Orlando, Florida on November 13, 2021. A crumbled up Israeli flag lays at his feet. Source: Gab

There is also some cross over between the Goyim Defense League and the White Lives Matter network in Texas. In December 2021, approximately 10 individuals associated with WLM Texas protested outside the ADL office in Houston. Some of them also participated in GDL’s antisemitic “Name the Nose” tour of south-central Texas in October 2021. WLM Texas members have also distributed propaganda promoting GDL’S streaming platform, GoyimTV.

In recent months, WLM Texas has become largely synonymous with the American National Socialist Party, a small, Texas-based neo-Nazi group, although ANSP claims that it is “in no way affiliated with White Lives Matter” and that it simply likes the “work they do and will spread and do work and aid if need be.” ANSP members routinely distribute propaganda promoting WLM Texas in the real-world, indicating that there is some overlap and possible coordination between the two groups.

In southern California, White Lives Matter has become nearly interchangeable with Crew 562, a small neo-Nazi group. In January and February 2022, Crew 562 members teamed up with individuals in the California WLM network to drop banners over highway overpasses in Temecula and Thousand Oaks. These banners included the “14 words,” a popular white supremacist slogan, and “Honk if White Lives Matter.” WLM California and Crew 562 members have also held joint workout sessions together. WLM California has previously collaborated with Goyim Defense League member Robert Wilson, who goes by “Aryan Bacon” online, participating in banner drops together in November and December 2021. Wilson also has ties to Crew 562. 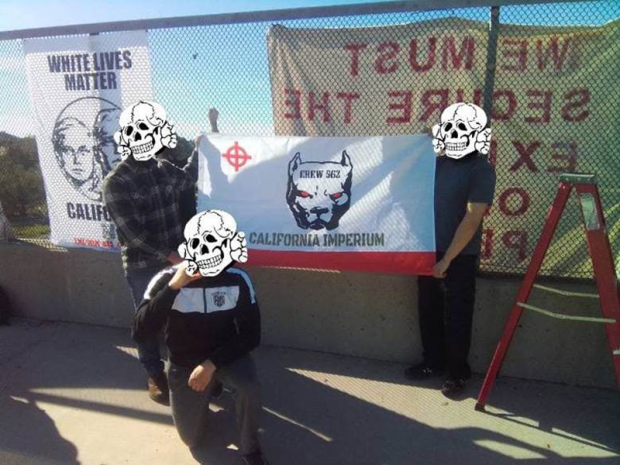 Nationalist Movement leader, Travis Golie, and Ken Zrallack, who helped coin the phrase “White Lives Matter” years ago, have been largely responsible for White Lives Matter activity in Illinois. The pair have routinely participated in banner drops together and have distributed White Lives Matter (and Goyim Defense League) propaganda across the state.

In New England, the neo-Nazi Nationalist Social Club (NSC) has sought to co-opt White Lives Matter for its own purposes. The group has held multiple events over the past year to coincide with WLM’s monthly designated days of action, including rallies in Boston, Massachusetts and Nashua, New Hampshire. In July 2021, NSC announced it would be coordinating future rallies with the WLM networks in several New England states. While NSC has held several WLM-themed rallies since, it is unclear if any of the individuals who have participated are affiliated with WLM or if they are exclusively members of NSC.

Members of the White Lives Matter network have also appeared on livestreams hosted by neo-Nazi Chris Pohlhaus, who goes by “The Hammer” online. In October 2021, Pohlhaus interviewed two WLM Texas members, along with popular Australian neo-Nazi Jaz Searby, where they discussed WLM’s origins and the importance of “pro-white activism.”

“One of the other main things you have to do to qualify yourself as white is hold your fucking flag for your race,” one representative from WLM Texas members told Pohlhaus. He continued, “if you ain't out there every day, every time you see a young father with white children, and you're not walking up to him having a racial conversation, at the very least you better be putting a sticker on a damn pole because what are we looking at? We're looking at the front lines of a war.” 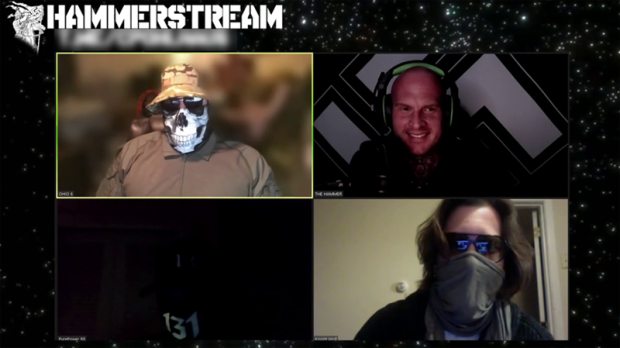 After its first nationwide day of action in April 2021, the White Lives Matter network has planned subsequent days of action for specific dates every month. The national Telegram channel sets the dates, but state networks decide on the type of action and coordination for events. Attendance for events like protests and rallies is usually low, but there have been a few exceptions, especially when local WLM networks collaborate with other white supremacist groups.

After antifa allegedly infiltrated state network Telegram channels while they were planning some of the first events, WLM now vets potential members before allowing them to post in public chats. They also use private chats for detailed event organizing and logistics. Additionally, they’ve ramped up propaganda efforts. Rather than focusing on large rallies, they now prioritize banner drops, flyers and stickers to promote their cause and recruit members. With this new strategy, WLM was one of the top four distributors of white supremacist propaganda in 2021, circulating material across 23 different states. Propaganda distribution is a common strategy for white supremacist groups because it is low risk and can reach large audiences. WLM propaganda ranges from stickers that simply say “White Lives Matter” with a QR code to the national Telegram page, to messages about the “white replacement” conspiracy theory. White replacement, also known as “white genocide,” is a conspiracy theory about the impending destruction of the white race. 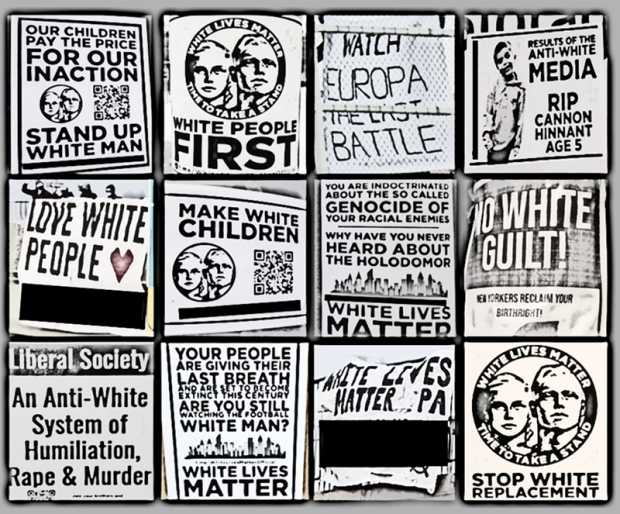 Occasionally, WLM members will meet for coordinated “team bonding” activities outside of the monthly days of action. This activity may include hiking, working out and/or distributing propaganda in their vicinity.

In addition to organizing on Telegram, White Lives Matter has active pages on Twitter, Instagram and Facebook. However, Telegram remains the primary place for event planning and recruitment activity.

While the national White Lives Matter Telegram channel tends to avoid antisemitic rhetoric and strongly discourages swastikas and neo-Nazi imagery at WLM events, there have been antisemitic incidents associated with the network since its emergence in March 2021. Additionally, WLM members in state channels and chats regularly espouse antisemitism in their communications with each other. Key incidents include: 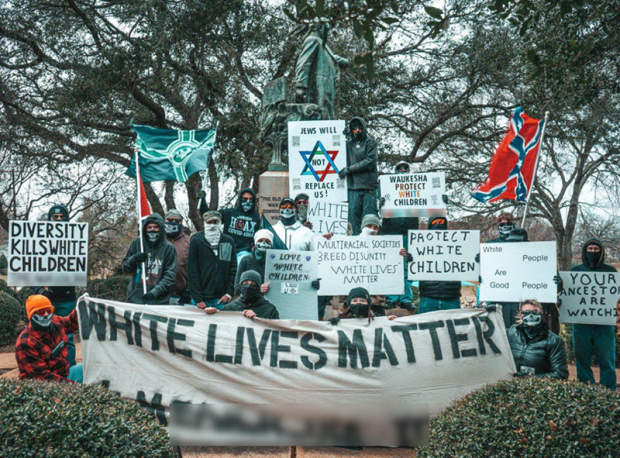 On January 15, 2022, approximately 20 individuals associated with White Lives Matter Texas held a flash demonstration in Palestine, Texas. One individual held a sign containing a Star of David and the message: "Jews will not replace us”; another individual could be seen wearing a hoodie that read: "Jewish hoax Covid-1984." Source: Telegram

Huntington Beach, California, April 11, 2021: This was the largest White Lives Matter rally to date. Twelve people were arrested, including two for noise violations and one for obstruction of law enforcement. Additionally, a man with a prominent swastika tattoo on his forearm was arrested after getting into an altercation with an Asian man.

Somerville, New Jersey, December 1, 2021: Three men were arrested on criminal mischief charges, accused of placing White Lives Matter stickers on borough and state property. One of the three men was also charged with fourth degree possession of a weapon for carrying a can of pepper spray larger than the legal limit.

Outside of arrests, police frequently respond to White Lives Matter demonstrations and have taken down WLM banners because they pose a public safety hazard. Banners are often placed in high-visibility places, like highway overpasses. They can be distracting to drivers and dangerous if they fall into the road.

Law enforcement also responded when White Lives Matter members protested outside of ADL’s Houston office in December 2021, but no arrests were made.