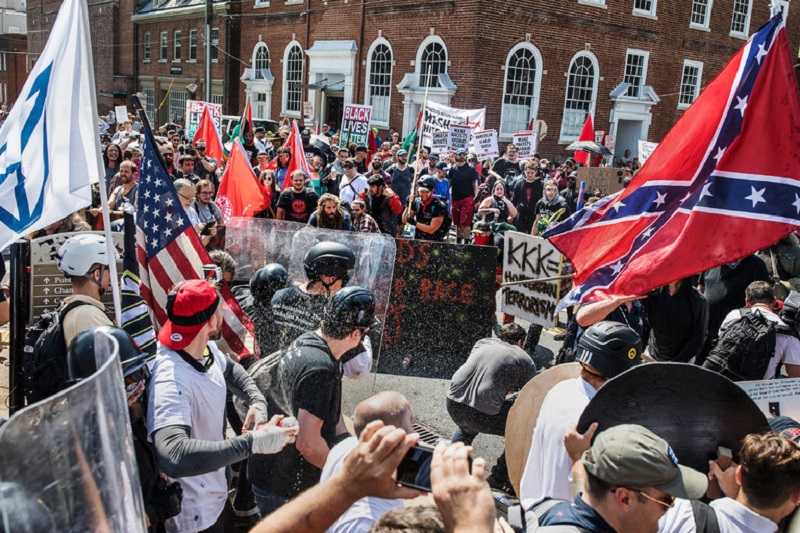 Antifa face off against white supremacists in Charlottesville, Virginia The anti-fascist protest movement known as antifa gained new prominence in the United States after the white supremacist Unite the Right rally in Charlottesville, VA, in August 2017. In Charlottesville and at many subsequent events held by white supremacists or right-wing extremists, antifa adherents have confronted what they believe to be authoritarian movements and groups.

Most people who show up to counter or oppose white supremacist public events are peaceful demonstrators, but when militant antifa adherents show up, they can increase the chances that an event may turn violent. There have been instances where encounters between antifa supporters and the far-right have turned violent. Of those counter-protesters who do engage in violence, not all of them support the antifa movement. Likewise, not all antifa supporters engage in violence. Those violent counter-protesters who are militant antifa adherents believe in active, aggressive opposition to far right-wing movements.

The antifa movement is a loose collection of groups, networks and individuals. It began in the 1960s in Europe, and had reached the US by the end of the 1970s.  The movement’s ideology is rooted in the belief that the Nazi party would never have been able to come to power in Germany if people had more aggressively fought them in the streets in the 1920s and 30s.

Most antifa adherents today come from the anarchist movement or from the far left, though since the 2016 presidential election, people with other political backgrounds have also joined their ranks. Some antifa adherents have expanded their definition of fascist/fascism to include not just white supremacists and other extremists, but also many conservatives and supporters of former President Trump. Antifa supporters sometimes use a logo with a double flag, usually in black and red.

Today, antifa adherents focus on countering right wing extremists both online and on the ground.  Antifa’s presence at protests is intended to intimidate and deter racists, but the use of violent measures by some militant antifa adherents against their adversaries can create a vicious, self-defeating cycle of attacks, counterattacks and blame. Antifa violence is problematic, in part because acts of violence serve to normalize violence more broadly, and can spark a dangerous cycle of retaliation with white supremacists and other right-wing extremists. Violence can also undermine and even delegitimize efforts of peaceful antifascist protesters.

The label “antifa” is often misapplied to include all counter-protesters. Violence perpetrated by anarchists or other unrelated actors is often misattributed to antifa supporters, which makes it especially critical that the public, reporters and law enforcement understand how antifa and the militant element of the movement fit within the larger counter-protest efforts. Doing so allows law enforcement to focus their resources on the small minority of actors who engage in violence without curtailing the civil rights of individuals who want their voices to be heard.

While violence can – and does – occur in conflicts between antifa actors and right-wing extremists, it is important to reject attempts to claim equivalence between antifa and the white supremacist and other right-wing extremist groups they oppose. Antifa adherents reject racism, and only a small, militant element use violent tactics to express this opposition. White supremacists and other right-wing extremists, on the other hand, use even more extreme violence to spread their ideologies of hate, to intimidate marginalized communities, and to undermine democratic norms. Right-wing extremists have been one of the largest and most consistent sources of domestic terror incidents in the United States for many years; they have murdered hundreds of people in this country over the last ten years alone.  To date, there has been only one suspected antifa-related murder, which took place on August 29, 2020, in Portland, Oregon.

On December 6, 2021, prosecutors charged seven individuals described as “self-identified anti-fascists” related to assaults that took place in January during the “Patriot March” at Pacific Beach in January 2021. The criminal complaint alleges that the self-identified antifa activists organized themselves in San Diego and LA respectively one week prior to the “Patriot March.” According to the complaint, those charged reportedly used pepper spray, flag poles, sticks, and other items to attack the pro-Trump protesters who assembled for the Patriot March.

Given that the antifa movement is leaderless and so decentralized, it is extremely difficult to pinpoint any governing plan.

Today’s antifa adherents argue that they are the on-the-ground defense against individuals they believe are promoting fascism in the United States.  Broadly speaking, antifa adherents tend to protest far-right events and their presence at these events is intended to intimidate and deter racists. There is evidence of violent clashing between antifa adherents who come out to counter-protest right-wing extremist events and right-wing extremists themselves. In these cases, it is often unclear which side starts the violence, but both can and do participate. Violent clashes between Proud Boys and antifa adherents on June 18, 2021, at Clackamette Park in Oregon are a clear recent example of this.

However, some actors who claim an affiliation with antifa have also targeted law enforcement – and by extension police precincts – because some antifa adherents perceive law enforcement as providing cover for far-right movements.

Businesses have also been targeted with vandalism, which in some cases may be an expression of some adherents’ anti-capitalist views. In addition, antifa adherents will sometimes focus on symbolic targets, by, for example, vandalizing an ICE office while protesting the mistreatment of children in ICE detention facilities. Both are examples of how the ideology of the antifa movement is blended, especially as the movement has gained more popularity.

Militant antifa adherents often use black bloc tactics, with participants wearing all black clothing and operating as a unified force; people with riot shields stay at the front while behind them, others move “like water.”  Antifa social media channels often prohibit filming or streaming at events, presumably to protect the identity of participants, particularly of those engaging in criminal activity.

While some more militant antifa adherents fight with their fists, others have thrown projectiles or launched sling shots. Antifa adherents have also used noxious gases, and at various times they have pushed through police barricades and attempted to exploit any perceived weakness in law enforcement presence.

Away from rallies, they also engage in tactics that involve exposing their adversaries’ identities, addresses, jobs and other private information. This can lead to their targets being harassed or losing their jobs, among other consequences. Members of the alt right and other right-wing extremists have responded with their own doxing-related campaigns, and by perpetuating hateful and violent narratives using fake “antifa” social media accounts.

Because there is no unifying body for antifa, it is impossible to know how many adherents are currently active.  Different localities have different antifa populations, but antifa adherents are also sometimes willing to travel hundreds of miles to oppose a white supremacist event.

In the summer of 2020, disinformation was widely shared on social media which alleged that antifa was trying to use Black Lives Matter protests as cover to act violently, that they were planning violent attacks on white suburbs, and that they were working with Muslim groups to impose Shariah law (in three respective disinformation campaigns).

There was also a fake antifa manual that was widely circulated, conspiracies connecting George Soros to BLM protests and antifa, and disinformation that antifa hosted a 4th of July “flag burning event.”

This tendency was amplified in the wake of the January 6th Capitol insurrection, as almost immediately false claims surfaced that antifa was the first to storm the Capitol – not pro-Trump extremists. These allegations were spread even by mainstream right-wing media personalities who falsely claimed that there were reports of busloads of antifa infiltrating the ranks of the pro-Trump crowd and that it was antifa that was the first to break the police barrier.

In July 2021, it was revealed that disinformation was put forth regarding claims that anti-fascists or BLM started wildfires in Oregon, sparking a wide variety of rumors that “leftists” were starting wildfires. A family was allegedly attacked while camping in Washington by those who were influenced by these rumors and thought their camper may be an “antifa transport vehicle.”

There is no evidence to support any of these allegations, and all these false claims do is deflect blame for the insurrection and build antifa into a threat that is not reflected in reality.