Brown v. Board of Education 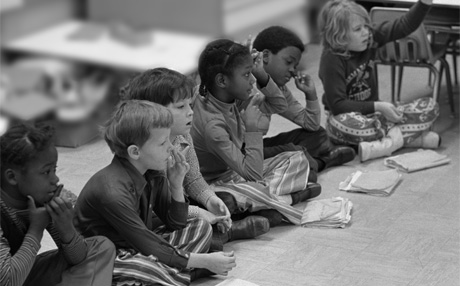 Download Resource
For Educators | For Parents, Families, and Caregivers

Sixty-five years after Brown v. Board of Education, the promise of equal access to quality education remains unfulfilled. School expulsions and suspensions are among the best predictors of who will drop out of high school and African American students are three more likely to be suspended or expelled than their white peers.

In January 2014, the Department of Education and Department of Justice issued watershed guidance on school discipline with the intent to “assist public elementary and secondary schools in meeting their obligations under Federal Law to administer student discipline without discriminating on the basis of race, color or national origin.”

In light of this Federal guidance, ADL has chosen to highlight this important data by creating two infographics, offering a snapshot into the respective issues of the School-to-Prison Pipeline and the Education Opportunity Gap. They serve as a reminder that there is still much work to be done.

The Road to Brown

We conclude that in the field of public education the doctrine of ‘separate but equal’ has no place. Separate educational facilities are inherently unequal.

These celebrated words from the Brown v. Board of Education Majority Opinion ushered in an unprecedented era of civil rights and school restructuring in the United States. In 1954, when this judgment was written, not a single black student attended a majority white public school in the American South.

In 1892, Homer Plessy, an African-American man, refused to give up his seat to a white man on a train in New Orleans, as he was required to do by Louisiana state law. For this action he was arrested. Plessy, contending that the Louisiana law separating blacks from whites on trains violated the “equal protection clause” of the 14th Amendment to the U.S. Constitution, decided to fight his arrest in court. In 1896, his case was presented to the United States Supreme Court. By a vote of 8-1, the Supreme Court ruled against Plessy. With this ruling, racial segregation was permitted under the guise of “separate but equal” and racially segregated schools were made legal. Despite the Supreme Court's ruling in Plessy and similar cases, many people continued to press for the abolition of Jim Crow and other racially discriminatory laws.

Legal Cases on the Issue of School Segregation

In 1952, five separate cases came before the U.S. District Court concerning the issue of segregation in public schools. These cases were Brown v. Board of Education of Topeka (Kansas), Briggs v. Elliot (South Carolina), Davis v. Board of Education of Prince Edward County (Virginia), Boiling v. Sharpe (District of Columbia) and Gebhart v. Ethel (Delaware). While the facts of each case are different, the main issue in each was the constitutionality of state-sponsored segregation in public schools. Thurgood Marshall and the NAACP Legal Defense and Education Fund handled these cases. A three-judge panel at the U.S. District Court heard the cases and ruled in favor of the school boards. The plaintiffs then appealed to the U.S. Supreme Court.

When the cases came before the Supreme Court in 1952, the Court consolidated all five cases under the name of Brown v. Board of Education. Thurgood Marshall personally argued the case before the Court. Although he raised a variety of legal issues on appeal, the most common one was that separate school systems for blacks and whites were inherently unequal, and thus violate the “equal protection clause” of the 14th Amendment to the U.S. Constitution. Unable to come to a solution by June 1953 (the end of the Court's 1952–1953 term), the Court decided to rehear the case in December 1953. Finally, all of the Justices agreed to support a unanimous decision.

Supreme Court Ruling in Brown v. Board of Education

On May 17, 1954, the Supreme Court delivered the unanimous ruling declaring state-sanctioned segregation of public schools was a violation of the 14th Amendment and was therefore unconstitutional. 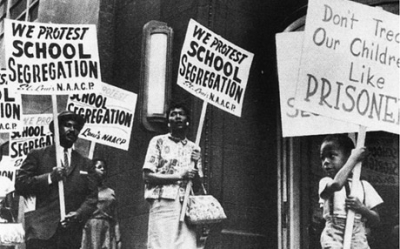 On May 17, 1954 the U.S. Supreme Court issued a landmark decision in Brown v. Board of Education desegregating America’s schools. Finding that “it is doubtful that any child may reasonably be expected to succeed in life if he is denied the opportunity of an education,” the Court concluded that education “is a right which must be made available to all on equal terms.” Sixty-five years after Brown, however, the promise of equal educational opportunities in the United States remains unfulfilled.

Today African American and Latino students are more than twice as likely to drop out of school as their white peers. Although there are many factors that contribute to this troubling inequity, school suspensions and expulsions are among the best indicators for which students will drop out of school. A student who has been suspended from school is more than three times more likely to drop out in the first two years of high school than a student who has never been suspended. Students who drop out of school have more difficulty finding gainful employment, have much lower earning power when they are employed, and ultimately are more likely to become involved with the criminal justice system. This cycle of suspensions and expulsions that leads to students dropping out of school, which in turn leads to increased likelihood of incarceration, has become known as the “school-to-prison pipeline.”

Harsh school discipline policies disproportionately impact students of color, students with disabilities, and students who identify as lesbian, gay, bisexual or transgender (LGBT). Data from the Department of Education’s Office for Civil Rights shows that black students are suspended and expelled at a rate three times greater than their white peers. Similarly, students with disabilities are more than twice as likely to receive out-of-school suspensions as students with no disabilities and LGBT youth are much more likely than their heterosexual peers to be suspended or expelled. Contrary to some hypotheses, studies have found little difference in students’ behavior across racial lines to account for the disproportionality. Rather, studies have found that African American students tend to receive harsher punishment for less serious behavior, and are more often punished for subjective offenses, such as “loitering” or “disrespect.”

The data suggests that race is still a prominent predictor of access to equality in schools. It remains as important as ever to discuss issues of racial disparity critically and thoughtfully in local communities. ADL has linked a number of resources for school and educators to consider as they work towards the Department of Education and Department of Justice’s articulated Guidelines for school enhance school climate and improve school discipline policies and practices.

"Looking Back, Reaching Forward: Exploring the Promise of Brown v. Board of Education in Contemporary Times," Curriculum Connections
This Curriculum Connections edition provides factual history about school integration in the U.S. and aims to connect past to present, challenge students to reflect on their own beliefs about diversity, and inspire social action in local schools and communities. Through research, discussion, case study and role play, students are challenged to investigate whether segregation is a problem that we once lived with or still live with. (Grades 9-12)

"A Time for Sight: The Debate over Color Blindness and Race-Consciousness in School Integration Policy," Curriculum Connections
In light of the 2007 Supreme Court decision in Parents Involved in Community Schools v. Seattle School District and Meredith v. Jefferson County Board of Education, ADL offers this comprehensive lesson that examines the debate over school integration within the broader context of the Court’s Brown v. Board of Education decision in 1954 and the desegregation of Central High School in Little Rock, AK in 1957. (Grades 10-12)

Fulfilling the Promise of Brown: School Discipline, Education Equity and the Achievement Gap Webinar
This webinar will provide a legal overview of the recently released guidance, trends in school discipline today and provide educational best practices for addressing bias related issues in schools. Participants will examine case studies that highlight the complex nature of school discipline and will be encouraged to respond using educational tools.

This webinar will provide a legal overview of the recently released guidance, trends in school discipline today and provide educational best practices for addressing bias related issues in schools. Participants will examine case studies that highlight the complex nature of school discipline and will be encouraged to respond using educational tools.

Looking Back Reaching Forward: Exploring the Promise of Brown v. Board of Education in Contemporary Times

A Time for Sight: The Debate over Color Blindness and Race-Consciousness in School Integration Policy