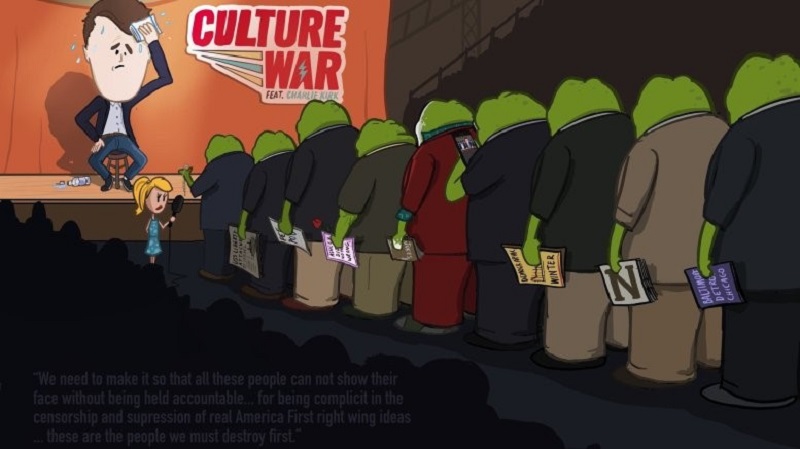 The so-called “Groyper army” (the term “Groyper” is explained below) is a white supremacist group that presents its ideology as more nuanced than other groups in the white supremacist sphere. While the group and leadership’s views align with those held by the white supremacist alt right, groypers attempt to normalize their ideology by aligning themselves with “Christianity” and “traditional” values ostensibly championed by the church, including marriage and family.

Like the alt right and other white supremacists, Groypers believe they are working to defend against demographic and cultural changes that are destroying the “true America”—a white, Christian nation.  However, Groypers differ in a number of ways from the alt right. They identify themselves as “American nationalists” who are part of the “America First” movement.  To the Groypers, “America First” means that the U.S. should close its borders, bar immigrants, oppose globalism and promote “traditional” values like Christianity and oppose “liberal” values such as feminism and LGBTQ+ rights. They claim not to be racist or antisemitic and see their bigoted views as “normal” and necessary to preserve white, European-American identity and culture, however some members have expressed racist and antisemitic views on multiple occasions. They believe their views are shared by the majority of white people.

A November 2019 article  included a video highlighting  the racist and antisemitic nature of the Groypers’ questions at an October 2019 TPUSA event at Ohio State University. One Groyper told the audience to Google the term “dancing Israelis,” a reference to an antisemitic conspiracy theory that claimed that Israelis carried out the 9/11 attacks and then celebrated as they watched the Twin Towers fall.

Another Groyper commented that “whites will account for less than 50% of the population in the United States” by 2045. He went on to claim that most groups other than whites, including immigrants, vote for Democrats, and added, “Can you prove that our white European ideals will be maintained if the country is no longer made up of white European descendants?”

At the Groyper Leadership Summit in Florida in December 2019, Groyper leader Patrick Casey, head of the white supremacist American Identity Movement, focused his remarks on changing demographics in the U.S.  and the “downsides to diversity.” Casey said, “Now one of the main things we discuss when we're talking about demographics is the effect that mass immigration from non-Western countries is having on our political institutions.”

Nick Fuentes, who runs the American First podcast and also spoke at the Groyper Leadership Summit, was even clearer in his remarks in terms of the Groypers’ wanting to maintain a white, Christian country.  Fuentes asserted that “Los Angeles today is the epicenter of what the country will look like in the future.” He went on to argue, “Culturally, demographically, if you're a white person and you go to Los Angeles, you're a minority. If you go to a shopping mall, if you walk down a street, you are a minority. You had different people from different countries come into ours and they changed the texture of life.”

Fuentes rejected the white supremacist label and asserts that when others call him and the Groypers “racist,” it is “an anti-white slur.”  He adds, “I am tired of caring what the left thinks. I care about the future of the country. We have to [say] what we mean. We have to do what we think is right.”

The Groypers’ focus on Turning Point USA stems primarily from their dislike of founder Charlie Kirk, who they consider insufficiently pro-white. Among their grievances: Kirk has spoken out against white supremacy and dismissed Ashley St. Clair, a TPUSA associate who was photographed at a dinner event attended by Fuentes.

Kirk is pro-Israel, and Groypers oppose Israel and are generally antisemitic. Groypers are also angry that Kirk has invited black conservatives and gay conservatives to TPUSA events as speakers. They believe Kirk is a hypocrite who doesn’t truly want to advance an “America First,” agenda which, for the Groypers, means “whites first.” And finally, they believe Kirk does not support free speech.

The “Groyper” meme emerged online in 2017, showing up on various platforms including the anonymous image board 4chan.  This was during the height of Pepe the Frog’s popularity with the alt right, and “Groyper” was a variation of Pepe the Frog, depicting the character resting his chin on interlinked hands.  The Groyper meme was adopted by people connected with the alt right, who added Groyper-related images to their Twitter handles and profile pictures.

More recently, members of the alt right and Fuentes supporters adopted the Groyper meme as a symbol for the “Groyper army.”

And while they are often pitted against traditional conservatives, Groypers have received public support from high profile conservatives who are perceived to be mainstream, including political pundit Michelle Malkin.

On February 28, 2020, Malkin spoke at the America First Political Action Conference (AFPAC), organized by Fuentes and other Groypers. Speaking to an audience of white supremacists and far-right activists, Malkin complained about the stifling impact of the term “antisemitism,” while reeling off a series of antisemitic tropes.

The people behind the Groyper movement include white supremacists from groups like American Identity Movement (AIM), formerly known as Identity Evropa. 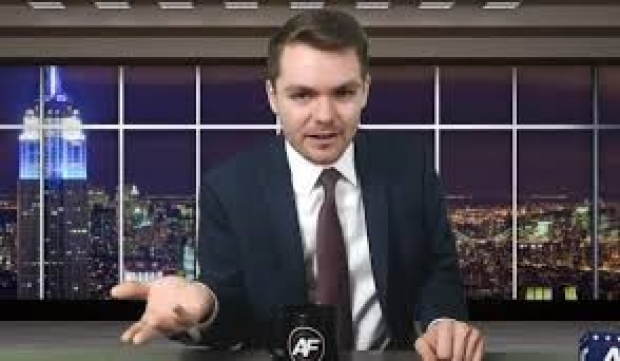 Nicholas (Nick) Fuentes, 21, runs the “America First,” podcast. His previous podcast, “Nationalist Review,” was co-hosted by James Allsup, an open white supremacist who is now a member of American Identity Movement.  Fuentes, who holds white supremacist views (but claims not to be a white supremacist), positions the Groypers as “Christian conservatives” who oppose immigration (undocumented and legal), globalism, gay and transgender rights, feminism and more.  This, however, is a ploy to attract mainstream support and distract from the group’s fundamentally white supremacist ideology. Fuentes and his followers often dress in suits and ties to project a “mainstream” conservative image.

In his podcast on November 11, 2019, Fuentes repeatedly claimed that many of the Groypers, including himself, were once strong Trump supporters but are angry about the administration’s embrace of Israel, and about mainstream conservatives’ support of globalism, “endless wars” and other issues they feel run counter to an “America First” agenda.

Fuentes has made a number of racist and anti-Semitic comments on his America First podcast, but always claimed he was being ironic and provocative rather than expressing actual extremist views. He has referred to Daily Wire columnist Matt Walsh as "shabbos goy race traitor" who works for Jews (Ben Shapiro, a Jewish conservative, runs the Daily Wire). On one of his podcasts, Fuentes “jokingly” denied the Holocaust and compared Jews burnt in concentration camps to cookies in an oven. Fuentes has also made racist comments, for example, asserting that segregation and policies in the pre-civil rights-era  South like separate drinking fountains “was better for them, it’s better for us.”

Patrick Casey is the leader of American Identity Movement (AIM), a white supremacist group formerly known as Identity Evropa (IE). Casey renamed the group in March 2019 after a number of people associated with IE were doxxed (had their identities exposed) by a left-wing group, revealing IE’s racist and antisemitic agenda. Despite this evidence, Casey tries to present AIM as a conservative group focusing on European-American identity. Casey, whose involvement with IE dates back to the group’s origins, was formerly IE’s Chief of Staff (known by his alias Reinhard Wolff). He took the leadership position in November 2017. His activism has included recruitment efforts at his alma mater, San Diego State University  and working for Red Ice TV, a Sweden-based alt right media company, where he wrote articles and provided live commentary. 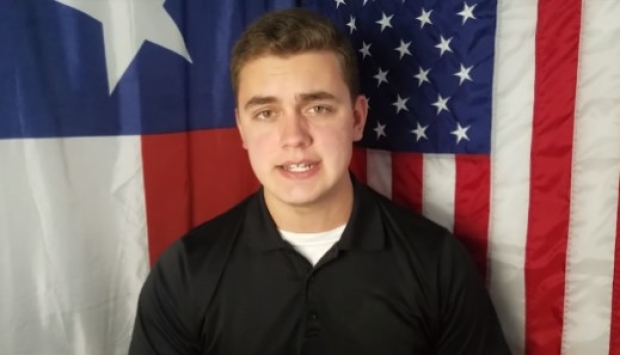 Jacob (Jake) Lloyd is a former contributor to Alex Jones’s conspiracy-driven Infowars.  Prior to his association with Jones, Lloyd posted YouTube videos aimed at embarrassing anti-fascist protestors at political rallies. He was a speaker at the Groyper Leadership Summit in West Palm Beach, Florida, in December 2019. In an interview with fellow Infowars reporter Harrison Smith, Lloyd explained that he played a significant role in formulating the questions Groypers used at various public events to challenge and embarrass conservative speakers.

Groypers refer to mainstream conservatives as “cuckservatives,” a combination of “con­ser­v­a­tive” and “cuck­old,” a term used by white supremacists to describe a white con­ser­v­a­tive who pro­motes the inter­ests of Jews and non-whites over those of whites. Groypers also refer to the mainstream conservative movement as Conservatism, Inc., as a way of disparaging that movement and associating it with wealthy donors whom the Groypers dismiss as pro-immigration globalists.

The Groypers have targeted public appearances by mainstream conservative figures like Charlie Kirk, Rep. Daniel Crenshaw (R-TX), Donald Trump, Jr., and conservative pundit Ben Shapiro, asking questions that are often leading and focused on Israel, immigration and LGBTQ+ issues.  They paint the conservative movement as having an allegiance to Jews and Israel, and rail against what they see as the prevailing anti-white and anti-American agenda, which they consider antithetical to the tenets of Christianity.

The Groypers often raise questions with specifically antisemitic connotations—for example, questioning the 1967 USS Liberty incident, in which Israelis mistakenly killed American sailors, or citing the “dancing Israelis,” a conspiracy theory that blames Israel for the 9/11 attacks and alleges that five Israelis in the New York area were dancing in celebration as they witnessed the Twin Towers fall.

The goal of these confrontations is to get media coverage. Groypers also try to monopolize any Q&A sessions, hoping to be rebuked, which would allow them to accuse mainstream conservatives of opposing free speech.

These tactics have a long history in the white supremacist movement; the USS Liberty incident and the 9/11 terrorist attacks have been used by a wide variety of white supremacists and antisemites in the past to paint Israel and Jews as evil and anti-American.  White supremacists have long maintained that mainstream conservatives do not do enough to elevate the needs of white people.

Regardless of whether the Groypers continue to target TPUSA events, we expect the group’s leadership will find new ways to confront traditional conservatives, normalize white nationalist ideas and attract media attention.

Significant events attended by members of the Groyper army:

Nashville, TN, TPUSA Politicon, October 26-27, 2019. A number of Groypers, including Fuentes, were prevented from attending Politicon, “an annual, non-partisan political convention in the United States,” which brings together "Republicans, Democrats, and people of all political stripes together to banter and spar over the most topical issues in smart and entertaining ways that often poke fun at both sides of the aisle."  Fuentes wanted to confront Charlie Kirk, who was one of the speakers, but was not allowed to enter the event.

Los Angeles, California, UCLA, November 11, 2019. Groypers heckled Donald Trump, Jr., who was accompanied by Trump campaign senior advisor Kimberly Guilfoyle, during a discussion of his book, Triggered: How the Left Thrives on Hate and Wants to Silence Us.

Raleigh, North Carolina, North Carolina State University, November 13, 2019. Groypers attended an event featuring Charlie Kirk and Lara Trump and attempted to challenge Kirk, but he was able to answer and deflect some of their questions. A number of Groypers saw this particular incident as a “loss.”

White Supremacists and Other Extremists Welcomed at CPAC 2019