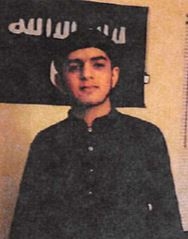 Akram Musleh, an 18-year-old resident of Brownsburg, Indiana, was arrested on June 21 for attempting to travel to join ISIS. Court documents indicate that Musleh had been engaging with terrorist propaganda since at least 2013, when Musleh was a 15-year-old high school student.

According to authorities, the FBI first came into contact with Musleh after it was discovered that he posted three videos of Anwar al-Awlaki to YouTube in August 2013. Awlaki, an American cleric and English-language propagandist for Al Qaeda in the Arabian Peninsula, was killed in a drone strike in 2011, but his speeches and quotes remain popular among extremist individuals and those radicalizing today. Indeed, the majority of U.S. residents linked to terror motivated by Islamic extremism since 2011 have allegedly downloaded material created by Awlaki or shared his speeches and statements on social media.

Upon finding the Awlaki speeches, court documents indicate that the FBI met with officials at Musleh’s high school, and coordinated with them to discourage Musleh from radicalizing.

Follow-up took place at Musleh’s school. It is unclear whether any measures could have been effective in Musleh’s case; he had allegedly obtained information on Awlaki from a family member, and so apparently had at least one close personal contact encouraging his radicalization. In any event, the measures unfortunately failed.

In April 2014, court documents indicate that Musleh asked minors at a park if they wanted to join ISIS. In 2015, Musleh allegedly made multiple attempts to travel to Turkey or Iraq, areas adjacent to ISIS-controlled territory that are often used initially as destinations for individuals attempting to join the group. In 2016, he allegedly researched attack targets and explosive materials, and then tried again to travel to join ISIS, this time in Libya, where the group has an active faction. He was arrested en route from Indiana to New York, where he allegedly intended to catch a plane from John F. Kennedy International Airport.

In recognition of this disturbing trend, ADL has released a series of resources for educators and school administrators that provide background information about extremism and mass violence among school-aged individuals and materials for creating resilience among their students. Among the materials provided is a background report on mass violence and extremism geared specifically to educators and produced in cooperation with START, the National Consortium for the Study of Terrorism and Response to Terrorism, at the University of Maryland. This backgrounder provides information about precursors to violent activity and establishing appropriate support and referral networks. A second resource is a unique lesson plan focused on enabling students to recognize propaganda if and when they encounter it and to become more discriminating consumers of online materials. Parallel resources for parents are available as well.