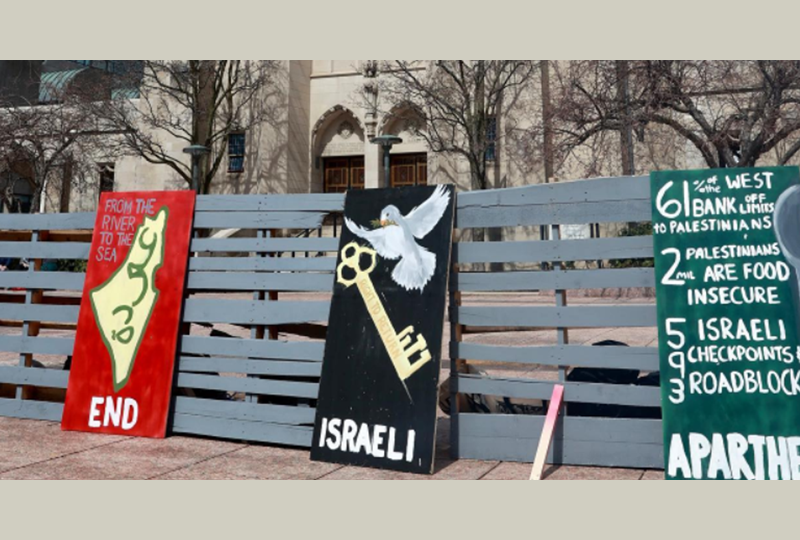 The 16th annual Israeli Apartheid Week (IAW), a series of worldwide anti-Israel events, took place in the United States and Canada March 21-28, 2022. This year’s theme, announced on the BDS Movement’s website, was "the role of culture, and art in particular, in decolonizing our minds in our collective struggles against cultural appropriation and oppression." While some events reflected the week’s theme of culture and art, much of the programming hewed, as is often the case, to the accusation inherent in the week’s name, and focused on the allegation that Israel is an apartheid state.

At least 90 IAW events were held, mostly on university campuses, from March 17 through March 31. As in past years, the major driver of these events was Students for Justice in Palestine (SJP), a vociferously anti-Israel campus group with approximately 200 chapters across the U.S. Allied groups, including the similarly anti-Zionist Jewish Voice for Peace (a community-based group with some campus chapters), occasionally participated.

Activities included celebrations of Palestinian heritage and criticism of Israel’s policies that, while contentious, were not problematic. However, a notable segment of the events engendered intense controversy and accusations of antisemitism.

This year, campus activists were emboldened by the more prevalent and mainstream use of the “apartheid” allegation against Israel, including in the media, by influencers and political figures, and in reports from international human rights organizations and international bodies.

Via their social media accounts, SJP, JVP and other anti-Israel groups have enthusiastically embraced biased reports from Human Rights Watch, B’Tselem, Amnesty International and the UN Special Rapporteur on the situation of human rights in the Palestinian territories occupied since 1967. A pattern has emerged of anti-Israel activists instrumentalizing the apartheid allegation in effort to criminalize Israel (some for its actions, others for its existence) and ostracize its supporters. Some of the most extreme rhetoric holds that anyone who expresses support for Israel is an “apartheid apologist” and should be shunned.

Israel is frequently and erroneously compared to apartheid South Africa, where a small white minority motivated by racism violently implemented racist legislation, components of which barred the remaining non-white (predominantly Black) 90 percent of the population from holding an array of jobs and public positions, from living in certain areas, from free travel and other civil rights and liberties. In stark contrast, within Israel there are legal and political safeguards ensuring equal treatment to Arab citizens. Indeed, Arab citizens serve as judges, ambassadors, legislators, journalists, professors, artists and play prominent roles in all aspects of Israeli society. Since June 2021, an Islamist Arab political party is part of Israel’s governing coalition – a development that would be impossible in an apartheid state.

Of course, discriminatory policies and practices against Arabs, Palestinians and others still exist in Israeli society and these should be condemned and confronted. But it is not apartheid, and the mislabeling does an injustice to the apartheid system suffered by so many in South Africa. Moreover, by weaponizing the apartheid allegation to deny Israel’s legitimacy, activists make it harder to achieve a two-state solution to the Israeli-Palestinian conflict.

Some of the major issues related to Israeli Apartheid Week this year included:

Mohammed El-Kurd, a prominent Palestinian activist and writer and The Nation’s first-ever Palestine Correspondent, traveled to speak at IAW events across the country. El-Kurd is an East Jerusalem resident in Sheikh Jarrah whose family is under threat of eviction, so his anger and frustration with Israel is understandable. However, his writing and social media posts often veer into antisemitism and other inflammatory rhetoric. El-Kurd has accused Israelis of eating the organs of Palestinians and of having a particular lust for Palestinian blood. He has compared Israelis to Nazis, negated the historic Jewish connection to the Land of Israel, and relentlessly vilified Zionism and Zionists.

El-Kurd spoke (often as a guest of SJP and allied groups) at campuses including Cornell, UC Berkeley, Duke and American University.

A defining characteristic of Israeli Apartheid Week since its inception has been the creation of “apartheid walls” on campuses, which are meant to depict Israel’s barrier between most of the West Bank and pre-1967 Israel. Anti-Israel activists consider the wall solely as a symbol of Palestinian oppression and a barrier designed to expropriate land, while Israel points to a wave of terror against Israeli civilians over many years that precipitated the building of the barrier. Mock apartheid walls usually contain anti-Israel messages, including those depicting Israel alone as responsible for the Israeli-Palestinian conflict.

While some who utilize this slogan may interpret it as a general call for Palestinian rights and freedom, it is also understood as support for dismantling the Jewish state, which can have the effect of making members of the Jewish and pro-Israel community feel ostracized and targeted.

At least eight protests, rallies or marches were planned by both community and campus groups:

At least two events were organized around the accusation that Israel engages in “pinkwashing” and “greenwashing,” common terms used to dismiss or deny Israeli society’s achievements in LGBTQ+ rights and environmentalism, respectively.  It is reasonable to argue that Israeli government officials have at times purposefully trumpeted Israel’s accomplishments in these areas to curry favor in front of liberal Western audiences. Yet many who make accusations of “washing” wield the terms to make sweeping statements about inherent corruption within these seemingly laudable aspects of Israeli society, all due to Israel’s policies toward the Palestinians. These activists refuse to recognize the lived experiences and improved lives of Israelis – both Arab and Jewish – on their own merits.

On March 31, University of Illinois, Chicago SJP hosted an event entitled “No Pride in Apartheid: Pinkwashing in Israel.” The program description defines pinkwashing: “A term used to describe how the Zionist state has manipulated the queer movement to advance their settler colonialism agenda.”

On March 29, George Washington University SJP held a “greenwashing lecture.” The description for the event refers to “the Israeli greenwashing of settler colonialism and apartheid” and states the lecture would “link the climate crisis and environmental justice to Palestinian liberation.”