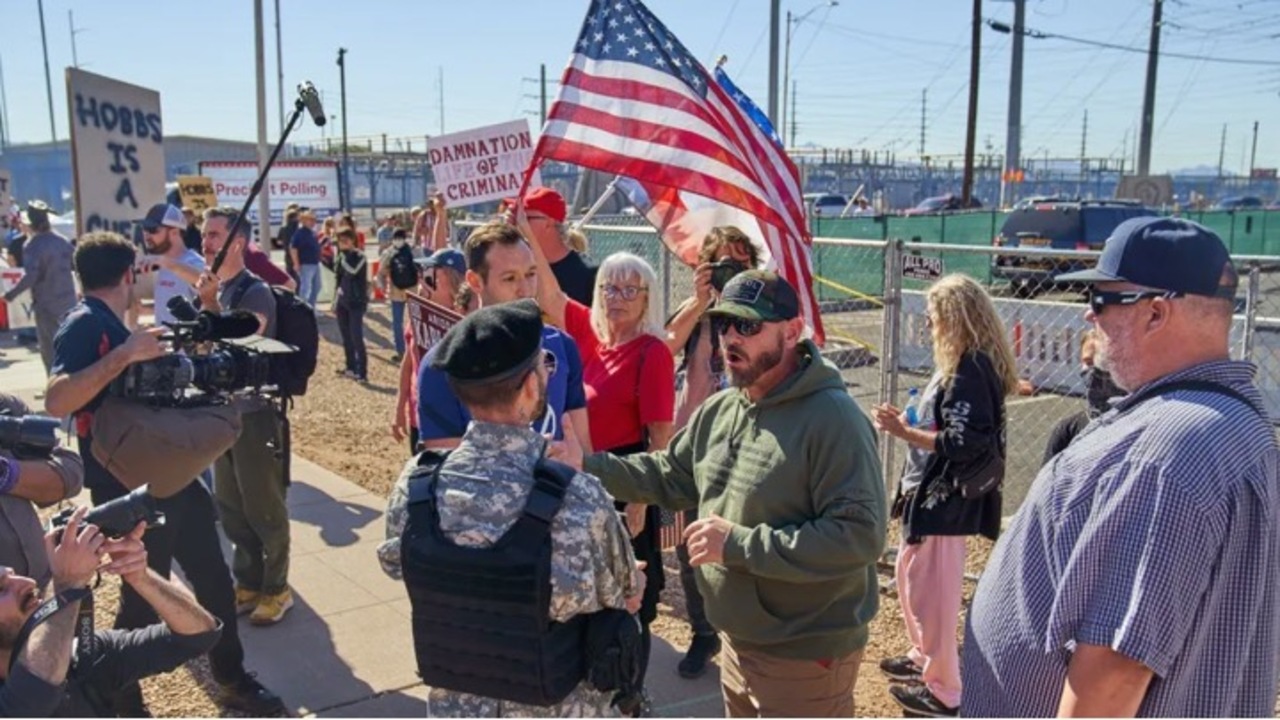 The 2022 U.S. midterm elections stirred up false narratives about secret and powerful entities committing widespread election fraud. These included old and new theories – and sometimes a combination of the two. Ten days after election day, their impact continues to be felt.

On Saturday, November 12, protesters gathered at the elections office in Maricopa County, Arizona for what they called the “Patriots Rise Up” rally. Protesters, angry about ongoing ballot counting in the Arizona gubernatorial race, included at least one member of the anti-government group, Boogaloo Boys. Although protesters eventually left without incident, the goal of the rally was to “stop” election officials from “stealing” the election.

Among false and misleading narratives that surrounded the midterm elections:

When some machines malfunctioned on election day, conspiracy theorists and election fraud promoters claimed the “issues” were evidence of attempted interference. Popular election fraud promoter Seth Keshel posted on Telegram and Truth Social that the errors were "deliberately staged” in order to create longer lines that would discourage people from voting.

The phrase “Hold the Line” proliferated on far-right accounts, encouraging people to not leave voter lines. While this is a common election day recommendation, the phrase “Hold the Line” is popular in QAnon and other far-right conspiratorial circles. Prominent QAnon influencers suggested on Telegram that voters should “literally hold the line” because “Maricopa County was highlighted by Q long ago.”

Suspicions about voting machine errors – particularly in Arizona – quickly gained traction across  social media. On Twitter, former Senator Dr. Kelli Ward (R-AZ), questioned why machines that worked during tests would not work on election day, while former president Donald Trump posted on Truth Social urging people to stay in line while suggesting that “they are trying to steal the election with bad Machines [sic] and DELAY.”

Former professor-turned-conspiracy-theorist David Clements, known for his ardent promotion of election fraud narratives, posted on Telegram about voting machine malfunctions in South Carolina. He emphasized the importance of filing complaints about these issues as they could “serve as a basis for demanding the withholding of certification,” advising followers to “vote, document, record, report!” 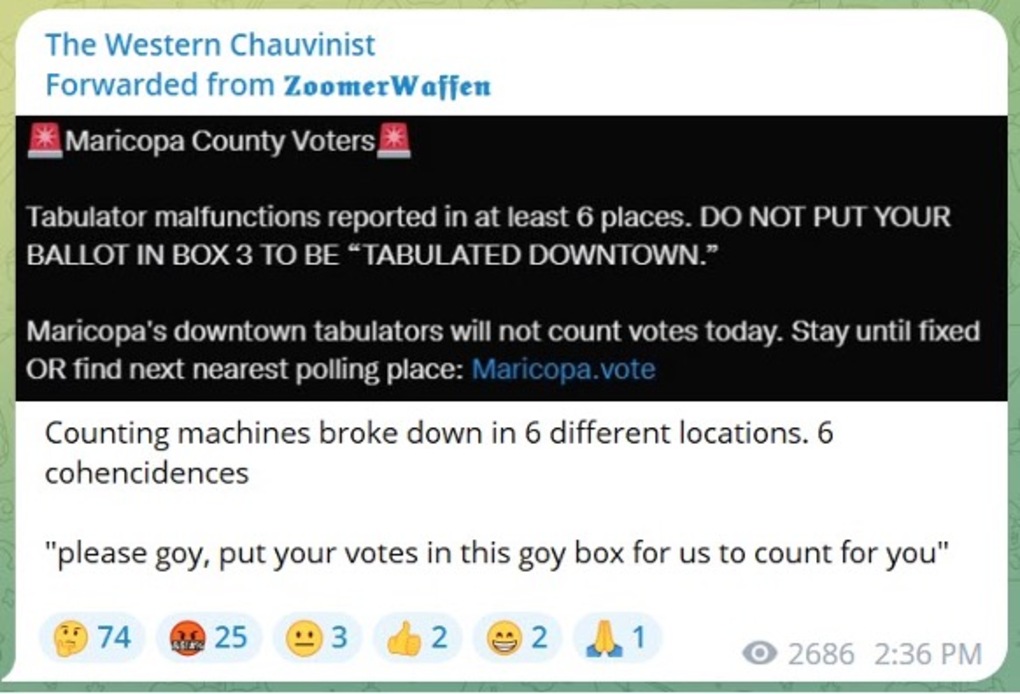 FALSE NARRATIVE 4: Election workers were lying to in-person voters about their voting records

On election day, a Fox 2 reporter tweeted that some Detroit voters who showed up in person were told they had already voted absentee. This was caused by known discrepancies between electronic and hard copy voter lists, and officials made it clear that anyone who was eligible to vote would be allowed to do so. Still, conspiracy theorists latched onto the report as “proof” of voter suppression in Detroit, and that eligible voters were being turned away. Promoters included Kristina Karamo (R-MI), who tweeted, “this is a CRIME.” 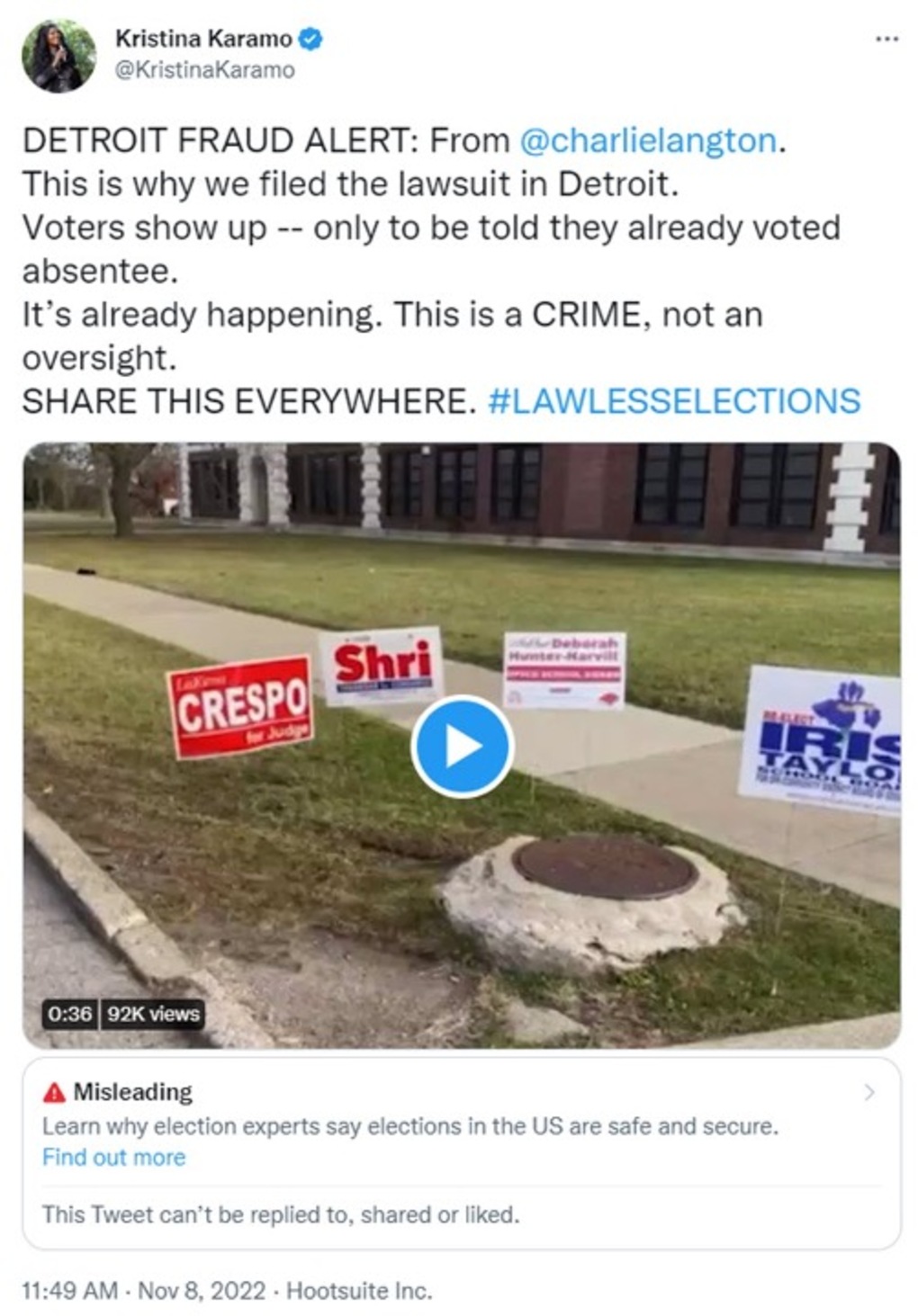 The Michigan Proud Boys shared the same video on Telegram, encouraging their followers to record any suspicious activity they observed at the polls. Former President Donald Trump also weighed in on Truth Social, writing: “The Absentee Ballot situation in Detroit is REALLY BAD. People are showing up to Vote only to be told, ‘sorry, you have already voted.’ This is happening in large numbers, elsewhere as well. Protest, Protest, Protest!”

When a judge ruled that Luzerne County, Pennsylvania, would extend voting hours due to a shortage of paper ballots, election fraud promoters claimed the paper shortage was an intentional act of voter suppression. Many on social media wondered why this happened after years of preparation, concluding that it must have been on purpose, and Islamophobe Brigitte Gabriel argued that issues like this were “why the people don’t trust our elections!” 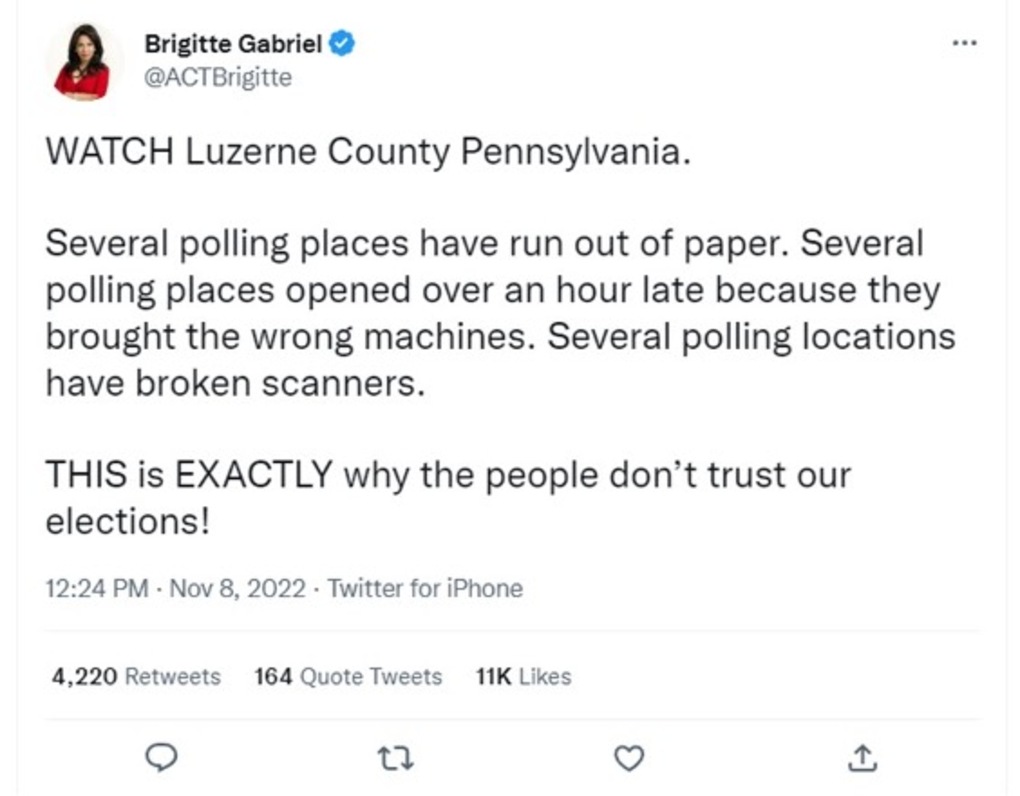 Brian Cates, an antisemitic online pundit with more than 100,000 followers on Truth Social, posted that voting issues in Luzerne County and throughout the U.S. were strategic and coordinated, and that those involved must “be CRIMINALLY PROSECUTED”.

Conspiracy theorists were encouraging people to “vote late,” or to get in line at polling places later in the day. 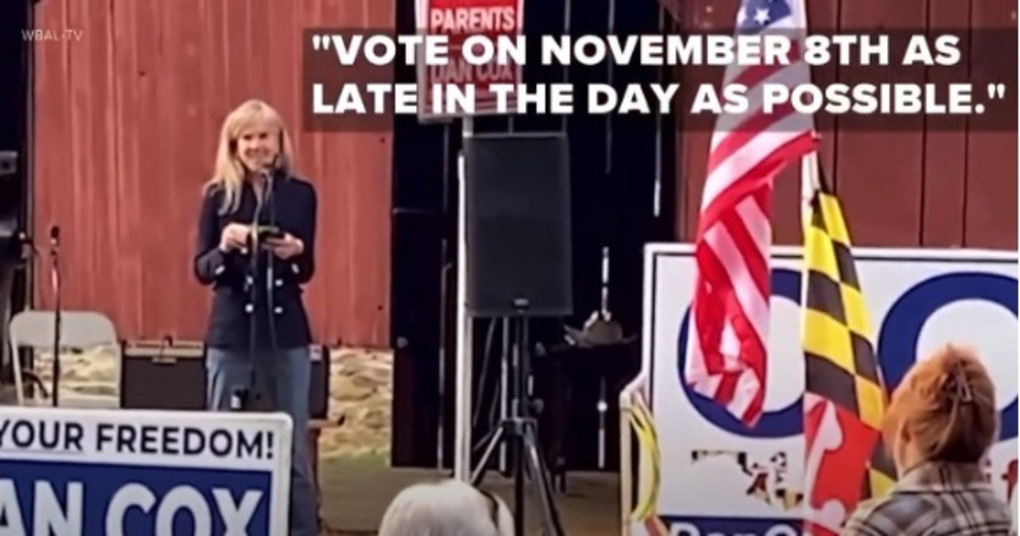 Some believed that voting late would prevent so-called “election stealers” from calculating the number of “fake” ballots needed to overcome a massive number of Republican votes.

Conspiracy theorists recommended that voters check the WiFi networks around their polling places for any “suspicious” names and to “email your County and State Board of Elections with the name of the wifi network” to investigate. Their premise was that voting machines were connected to special networks where they could be easily hacked – a claim that has surfaced in past elections. 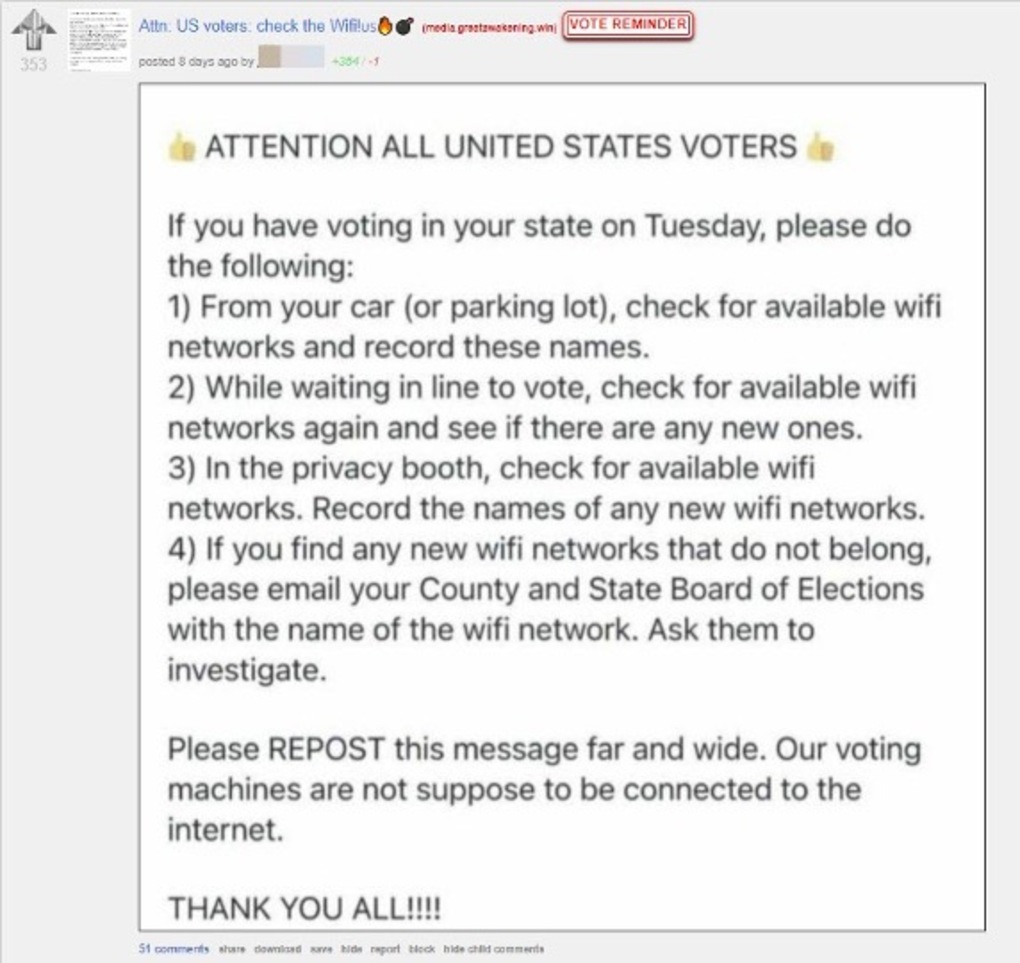 This warning prompted popular influencers, including QAnon promoters, to share the WiFi names around their polling places.