When the U.S. Supreme Court issued its watershed decision forty-three years ago in Roe v. Wade, it staked out a zone of privacy around each woman’s right to determine whether to continue a pregnancy. While assailed repeatedly in the decades since, and at times reviewed and subjected to revision, this essential sphere of personal autonomy has stood the test of time. The Court’s recognition of the right to access an abortion reflects its appreciation of the intimacy of this decision. The choice to continue or terminate a pregnancy encompasses deeply private considerations of physical and mental health, personal circumstance, family planning, and financial and educational conditions and goals. 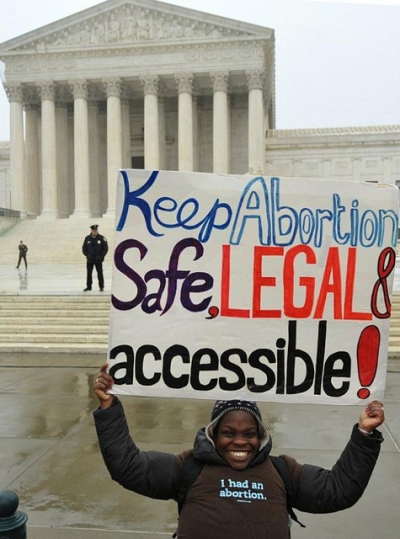 And for many the decision also includes contemplation of their core religious convictions and personal religious values. This point is frequently lost in the clamor and contention of America’s debate over reproductive freedom. Too often the dispute is framed in binary terms, between persons of religious faith who view abortion as murder and those who regard abortion as a woman’s right to control their own bodies and decide the course of their own lives. The faith and religious principles of those who choose to exercise their reproductive rights are rarely discussed. When they are, it is too often through the eyes of anti-abortion extremists who characterize those who disagree with them as irreligious.

This depiction is as far-removed from reality as the claim these same abortion opponents make to be the guardians of “women’s health” while depriving millions of women access to safe and secure facilities offering the reproductive medical care they seek. The reality is that women who choose to terminate their pregnancies, and those who support their right to do so, are often as religious, faithful, and dedicated to their spiritual and moral principles as those who stand on the other side of the ideological divide.

America is a nation of more than 320 million people and hundreds of religious denominations. The presumption that men and women of faith speak with one voice on the question of abortion, or that all principled individuals who believe in God must stand against abortion, is arrogant and wrong. The Pew Research Center has catalogued the view of 17 major religious groups on abortion, and this survey reveals a vast diversity of stances between and even within religious groups. From those who oppose abortion under all circumstances, to those who make exceptions for life, health, rape, or incest, to those who draw a line at the point of fetal viability, to those who advocate for the right to safe and accessible abortions, the beliefs of religious groups and persons of faith are as varied and diverse as this nation.

The insistence of far-right activists that they speak on behalf of all religious believers unmasks a deeper agenda of intolerance and exclusion. Disregarding the religious values of those who disagree is a furtive method of silencing religious dissent. If the “religious” view brooks no quarrel on questions of abortion, then religious groups and individual persons of faith who disagree with anti-abortion activists are recast in the role of the faithless. In so doing, the religious right imposes its theology on the entire country, assaulting not just the reproductive freedom of women, but also the religious freedom of all who believe differently from them.

On Wednesday, the U.S. Supreme Court will hear oral argument in the case of Whole Woman’s Health v. Cole, and in so doing will consider the constitutionality of onerous state restrictions imposing medically unnecessary requirements for reproductive health centers. These restrictions are a thinly veiled attempt to shut down these centers and restrict women’s constitutionally guaranteed access to abortions. The impact of these so-called TRAP (targeted regulation of abortion providers) laws has been grievous, shuttering dozens of clinics and forcing women to travel hundreds of miles and even across state lines to exercise their reproductive freedom. As highlighted in the National Women’s Law Center amicus brief that the Anti-Defamation League and forty-six other organizations joined, the Texas law not only threatens women’s economic well-being, job security, and education attainment, but also has a particularly harmful impact on low-income women, women of color, women in low-wage jobs, and women who already have children.

In addition to the dozens of medical organizations, doctors, scientists, political organizations, and concerned citizens who have filed amicus briefs in support of the petitioners and in opposition to Texas’s unconstitutional TRAP laws, the fight for women’s reproductive freedom has also been joined by theologians, churches, religious groups, religious governing bodies, and more than 1,200 individual religious leaders. These voices matter. They shout with a thunderous voice against the lie that religious faith is incompatible with reproductive freedom.

Abortion is not just a question of personal autonomy, though that would be enough. It is about respect for religious freedom. A woman choosing whether to continue a pregnancy should be guided by her own conscience and religious values, not those imposed on her