ADL Alerts Service Providers to Hezbollah Presence on Their Platforms 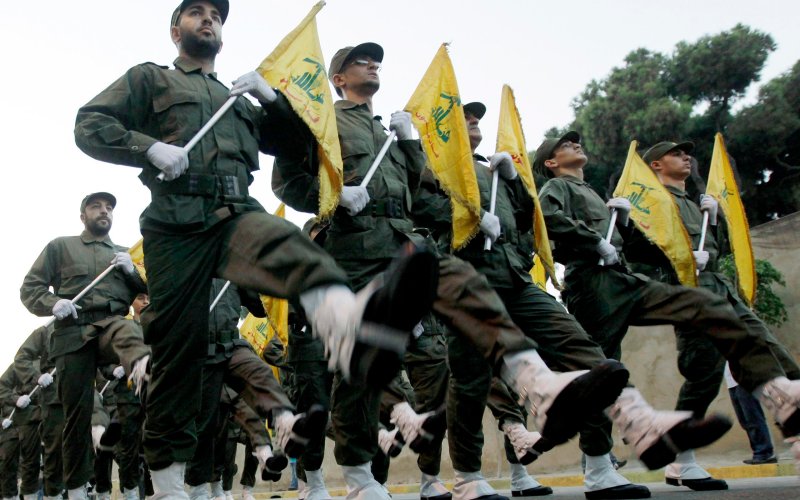 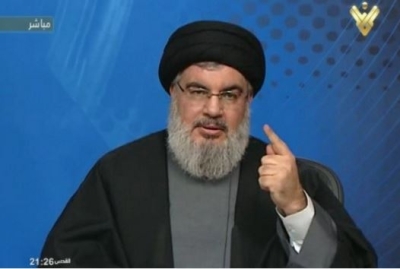 Al-Manar, the media wing of Hezbollah, has long broadcast terrorist propaganda disguised as news to the Arab speaking world. After being dropped by two of the largest satellite providers in the Arabic speaking world, ArabSat (which dropped the channel in December 2015) and NileSat (which dropped the channel in April 2016), Hezbollah is relying increasingly on online platforms to maintain its viewer base. As a result, removal of al-Manar presence from online platforms at this time has the potential to significantly disrupt the group’s reach and impact.

Al-Manar, designated by the U.S. State Department as a Specially Designated Global Terrorist Entity, currently has official presence on a number of U.S.-based social media and web platforms, most of which are linked from al-Manar’s official website. ADL has alerted the companies to the group’s presence.

Al-Manar has an official Twitter handle, @almanarnews, which can be accessed via direct link from the al-Manar website. The account appears to have been created in July 2010, and has upwards of 334,000 followers. According to the page description, “Al-Manar website News and programs. Al-Manar TV is considered the television of the Lebanese resistance against the Israeli occupation.” The description also includes a link to live streaming of al-Manar broadcasts on the al-Manar website.

Most of the Tweets on the al-Manar Twitter feed include statements promoting violence against the U.S., Israel, and other entities Hezbollah considers to be its enemies. It also features statements and speeches of Hassan Nasrallah, the head of Hezbollah.

Specific examples of Tweets include one Tweet from May 18, 2016 that stated,“The American presence is an occupation that must be fought against,” one Tweet from October 8, 2015 with an image showing a stabbed Israeli civilian and a misleading caption that reads: “an Israeli soldier stabbed in occupied Jerusalem;” and a link to an article that praises stabbing attacks against Israelis. Another Tweet from January 28, 2016 states, “The missiles of the Resistance (Hezbollah) disturb Washington…[because] Israel’s safety comes first [for the U.S.]. 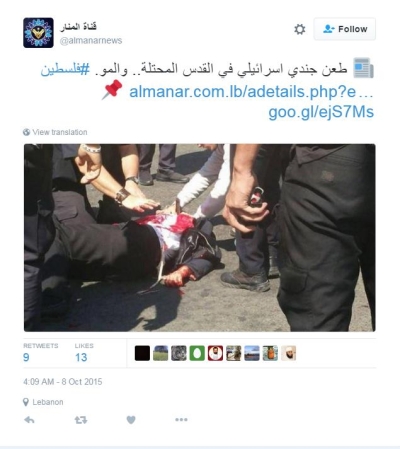 Al-Manar has an official Facebook page titled al-Manar Channel – the Official Page (in Arabic). The page can be accessed via direct link from the al-Manar website and has over 4,000 followers. The page displays al-Manar’s official log and posts news about Hezbollah and links to live streaming of al-Manar television.

As on the Twitter feed, most of the posts on the al-Manar Facebook page include statements promoting violence against the U.S., Israel, and other entities Hezbollah considers to be its enemies, as well as Islamic extremist views and statements and speeches by Hassan Nasrallah.

Specific examples of posts include a cartoon posted on May 18, 2016 depicting an American soldier supporting ISIS and a post encouraging stabbing terrorist attacks in Israel with an image of a knife covered with the Palestinian flag with the Arabic text stating, “stab it in the heart of your enemy.”

One of the posts, also dated May 18, 2016, includes an admission of the group’s violation of Facebook’s terms of service. It reads, “To our honorable and beloved page visitors, no matter how many pages they shut down. We will always be the voice of resistance which doesn’t know defeat or submission.  We invite you, oh you who love resistance, resistance fighters, and the leader of the resistance to stand right in the face of falsehood to call upon relatives and friends to actively participate in this page, which thanks to God and thanks to your efforts you will continue and win.”

Al-Manar has an official Instagram page called almanarnews. The page has 873 followers and can be accessed via direct link from the al-Manar website. The page’s Arabic-language description states, “Al-Manar website News and programs,  al-Manar TV is considered the television of the Lebanese resistance against the  Israeli occupation.” The description also provides a link for users to “watch the TV channel broadcast.”

The Instagram page displays the official logo of al-Manar and links to live streaming of the terrorist entity’s TV broadcast.

Al-Manar has an official YouTube page called Al Manar Channel 3. The page has 9,669 followers and can be accessed via direct link from the al-Manar website. The page description calls it, “The official page of the Lebanese Media Group al-Manar channel-Lebanon.”

The YouTube page displays the official logo of al-Manar and links to media materials produced by al-Manar. The channel also has a live stream of the al-Manar TV station and includes posts and videos featuring Hezbollah’s military operations. 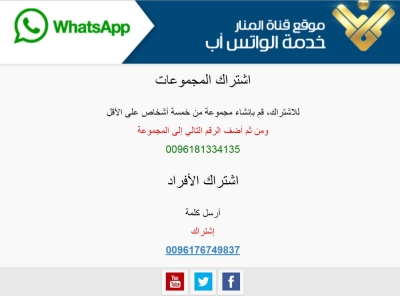 ADL previously exposed Hezbollah use of WhatsApp in 2014, including attempts by the group to interest WorldCup supporters in its services via WhatsApp.

Al-Manar has an official Telegram channel called almanarnews, which has 17,538 followers and is accessible via direct link from the al-Manar website. The channel description states that it is “The official account of al-Manar channel on Telegram” and provides a link for users to “watch the TV channel broadcast” on the al-Manar website.

The channel displays the official logo of al-Manar and links to posts and videos from the satellite station.

In the past two weeks, ADL has discovered and alerted platforms to the development of new apps that enable al-Manar streaming for mobile phones. These included an app on iTunes, which iTunes has since removed, and an app on Google Play. Al-manar subsequently posted a statement on Twitter recommending that its Apple users use Telegram to get news and alerts, rather than iTunes. There is reason to assume that Hezbollah will continue attempting to create new apps, as it has done multiple times in the past.

ADL has consistently documented Hezbollah’s creation of apps for mobile devices and alerted platforms to their existence each time. Information on each of these instances is available at the following links:

Hezbollah Is Still Trying To Broadcast Messages To Your Handheld (2014)