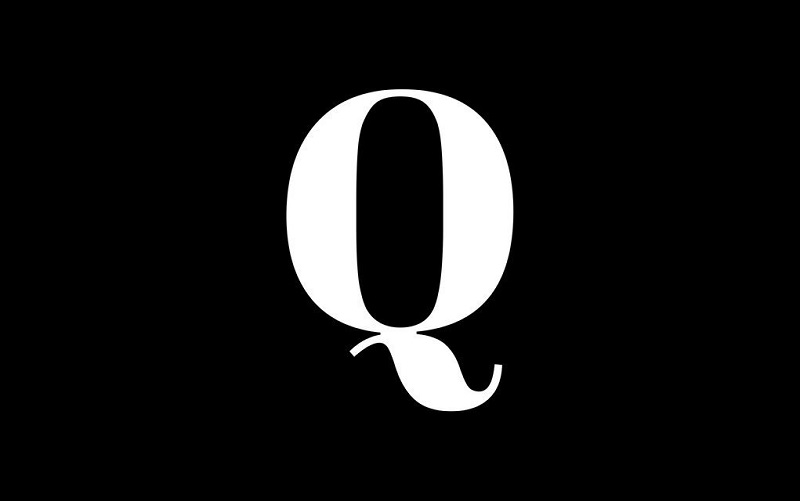 I am not antifa or BLM. I’m a QAnon and digital soldier. My name is Jake.

“QAnon Shaman” Jake Angeli identifying himself on Twitter as a QAnon adherent who participated in the January 6 attack on the U.S. Capitol.

In the wake of the violence at the U.S. Capitol on January 6, Twitter must enforce its rules and suspend accounts that post and spread QAnon conspiracy theories, which target democratic institutions and seed insurrection.

Twitter claimed throughout 2020 that it was taking action against QAnon accounts. In July 2020, the platform announced it would take stronger action against QAnon activity on the platform, and “permanently suspend accounts Tweeting about these topics that we know are engaged in violations of our multi-account policy, coordinating abuse around individual victims, or are attempting to evade a previous suspension.” In September 2020, Twitter claimed that as a result of this change in policy QAnon-related content and accounts dropped by more than 50% and announced additions to their coordinated harmful activity policy. The new rules were to be applied to activity on the platform to stem the spread of this harmful conspiracy theory. Indeed, ignoring high-profile accounts that supported and spread vile and dangerous QAnon conspiracy theories would have undercut efforts to combat the spread.

Despite this, ADL found dozens of Twitter accounts supporting QAnon and actively spreading disinformation and conspiracy theories about the results of the 2020 presidential election as of January 6, in violation of Twitter’s policies.

These accounts promulgating QAnon conspiracies have large numbers of followers, potentially reaching millions of people. Twitter remains fertile ground for the particularly virulent strain of disinformation and conspiracy theories that make up QAnon to take root and continue to flourish more than five months after announcing its policy, including on the day domestic terrorists attacked the U.S. Capitol.

QAnon is a sprawling global conspiracy holding that rings of pedophiles control world governments. In the U.S., QAnon adherents accuse leading Democrats and a “Deep State,” which includes high profile celebrities, as being part of a cabal of pedophiles determined to bring down President Trump. In recent months, QAnon has been a primary driver of the false and thoroughly debunked conspiracy theory that the U.S. presidential election was stolen from President Trump by virtue of massive voter fraud. The violent mob action and assault on the U.S. Capitol on January 6, 2021 grew out of the viral spread of these conspiracy theories. But for years there have been warning signs that social media platforms such as Twitter were providing a fertile environment for the increased radicalization and potential violence from conspiracy groups like QAnon.

QAnon played a key role in the attack on the U.S. Capitol, with QAnon accounts on Twitter and other platforms and hailed the violence as a first step in a civil war. According to reports, QAnon supporters were the first rioters to enter the Capitol, and one of them, Jake Angeli, a far-right conspiracy theorist dubbed the “QAnon Shaman,” has been a predictable presence at far-right rallies supporting the president’s attempts to discredit the 2020 election. After several QAnon supporters claimed Angeli was a member of antifa, Angeli publicly denied the charges and reiterated his support for QAnon.

QAnon’s wide-reaching conspiracy theory is popular among a range of right-wing extremists and some public supporters of President Trump, including a number of recent candidates for federal office and two members of Congress. Its adherents follow the anonymous Q, and believe that the shadowy cabal of pedophiles who control world governments will eventually be brought to justice by President Trump. This dangerous conspiracy theory, which originated on the online message board 4chan in 2017, has been connected with a number of violent events, such as an armed standoff near the Hoover Dam, in addition to yesterday’s attack on the Capitol in Washington, D.C.

One of the most prominent QAnon accounts belongs to Sidney Powell, a lawyer who represented President Trump in his lawsuits contesting the election. Ms. Powell’s account, which has more than a million followers, tweeted demonstrably false claims about the election being stolen. She also blamed the events of January 6 on antifa and Black Lives Matter.

Ms. Powell uses #Kraken in her Twitter handle. The Kraken, a sea monster from Scandinavian folklore that emerges from the ocean to eat its enemies, has become an internet meme resulting from its use in the film Clash of the Titans rallying cry for QAnon conspiracy theorists alleging widespread election fraud.

Using the hashtag #ReleasetheKraken, they claim that the Kraken is a trove of documents proving the alleged election fraud. These claims have been rejected repeatedly in court. Nevertheless, Ms. Powell tweeted, “We’ve now seen the true colors of all our elected officials. This was a setup [sic]. It’s an excuse for them to cram down an illegal election.” This tweet and others referenced below are spreading on Twitter faster than the platform can keep up. At the time of this writing, that post had been retweeted more than 8,800 times and liked more than 18,800 times in just 40 minutes on January 6 before being actioned by Twitter. Users can no longer reply to the tweet or retweet it.

Another high-profile account belonging to QAnon adherent and newly-elected Congressperson Marjorie Taylor Greene recently said, “Q is a patriot, that’s for sure.” Ms. Greene has nearly 260,000 followers, contends that Brad Rafensperger, Georgia’s secretary of state, helped “steal” the recent U.S. Senate runoffs and includes numerous mentions of “fraudulent electoral votes” in her tweets. This is in spite of the fact that Georgia affirmed president-elect Joseph Biden’s victory after three counts of its ballots.

One user with over 445,000 followers tweeted on January 6, “My fellow Americans, the storm is upon us…” The word “storm” is commonly used by QAnon adherents following cryptic remarks made by President Trump in 2017 when he said a gathering of military leaders represented the “calm before the storm.” Since then, QAnon followers have seized the idea that President Trump is the only bulwark against a cabal of Satan-worshipping pedophiles who secretly control the world. As of this writing, this tweet has 17,500 retweets and over 40,000 likes.

It is not just QAnon messages that make up the problematic accounts we're still seeing regularly on Twitter. Two accounts have profile pictures of Pepe the Frog, an internet meme often used as a hate symbol in racist or antisemitic contexts. One account, with over 119,000 followers, tweets about “Kek,” a made-up deity connected to a semi-ironic “religion” embraced by alt-right white supremacists. This same account tweeted on January 6 a screen capture of an anonymous 4chan post written by “Q Clearance Patriot” in 2017. The account also includes invocations to “trust the plan,” a reference to the notion that the chaotic events of the past few years during the Trump administration are part of a master plan that will soon be revealed. As of this writing, these tweets have a combined 1,956 retweets and almost 4,000 likes. 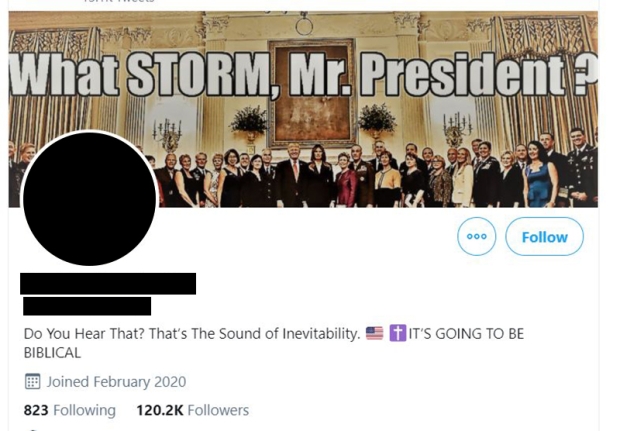 A number of the accounts supporting QAnon investigated by ADL are now asserting that antifa was responsible for the violence at the Capitol, labeling the riots and mob violence of yesterday “false flag” attacks that advance a liberal agenda. These accounts have provided no evidence supporting their claims, and a number of the claims have already been debunked as individuals falsely claimed to be antifa actors are revealed to be right-wing extremists. One user with over 26,000 followers who frequently retweets QAnon-related content tweeted at around 6 P.M. yesterday a YouTube video alleging antifa was behind the violence; the timing of this tweet coincides with the curfew time enforced by the mayor of Washington, D.C.

As of January 6, Twitter is using a new label “This claim of election fraud is disputed, and this Tweet can’t be replied to, Retweeted, or liked due to a risk of violence,” which was prompted by a video posted by President Trump telling rioters “We love you” and that they were “very special.” That video has since been removed from Twitter and Facebook. Twitter also locked President Trump’s account for 12 hours. These are changes for the better.  During the election, Twitter used a more equivocating label, “This claim of election fraud is disputed,” so its new step of preventing users from easily engaging with a tweet is a bolder one for the platform. Still, users can quote tweet any content with the new label. And overall, while ADL commends this action, it is insufficient to counter the rampant disinformation disseminated to thousands, if not millions, of users, within minutes or even seconds. False claims spread more rapidly than the truth on social media—and many platforms, including the largest, exploit this as an integral part of their business models because it drives engagement, and thus advertising revenue. Incendiary content prompts users to spend more time on social media, and that boosts the bottom line.

Labels alone do not deter people from sharing mendacious content with disastrous and dangerous consequences such as the ones we saw play out horrifically yesterday. Research shows applying labels to tweets can backfire and may lead people to think unlabeled content is accurate. Twitter must take more stringent action against accounts spreading disinformation and conspiracy content to thousands of people in an instant. The platform should be suspending, deamplifying or deplatforming violative accounts and content to protect Americans' lives and safeguard our democratic institutions. Snapchat has locked President Trump's account. Facebook has blocked President Trump's account until at least the end of his term. ADL urges other platforms, especially Twitter, to take similar action. The attempted coup on January 6, 2021 was a stark reminder of what can happen when disinformation and conspiracy theories have a 24/7 megaphone.