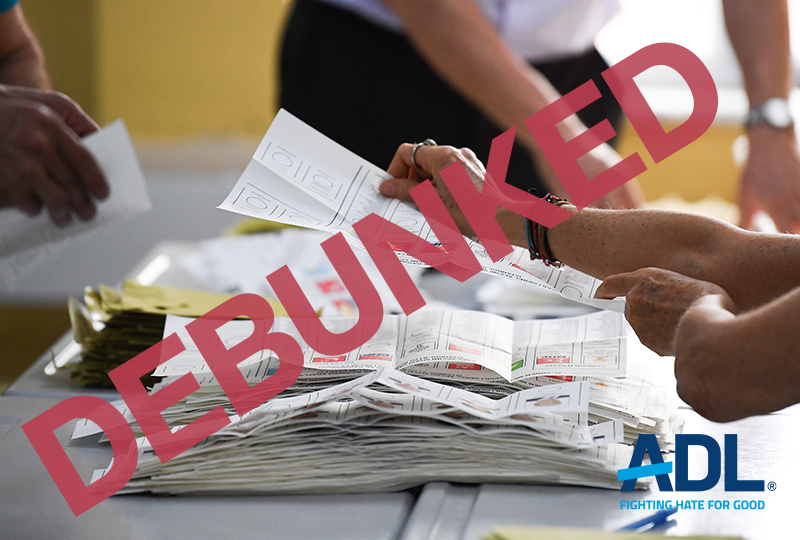 The 2020 Election has thrown America’s divisions into sharp relief. Beneath the distrust and anger, pervasive disinformation campaigns are poisoning our body politic.

Researchers at ADL’s Center on Extremism have examined a number of these campaigns, exposing the falsehoods, twisted truths and outright lies. 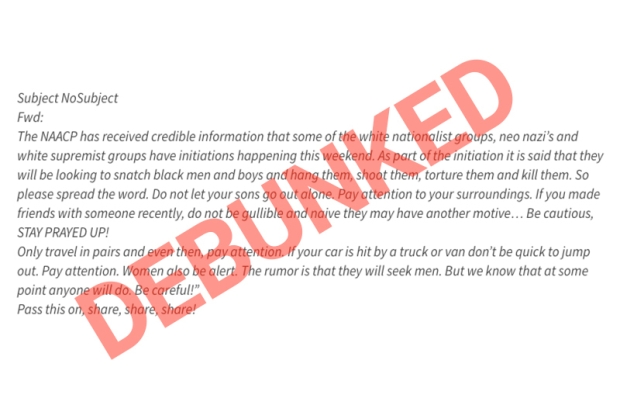 Disinformation: Claims that the NAACP issued a warning about upcoming white supremacist actions that would put Black men and boys at risk.

Overview: Snopes debunked these claims as an apparent “case of ‘copypasta,’ a type of internet hoax defined as "a block of text which is repeatedly copied and pasted by individuals over various online forums and social media sites."

Description: In early July 2020, a rumor on social media claimed that the NAACP was warning of upcoming white supremacist group initiations which would involve extremists “looking to snatch black men and boys and hang them, shoot them, torture them and kill them.” The message indicated the alleged initiations were happening “this weekend,” but did not include any specific dates. Snopes debunked these claims as an apparent “case of ‘copypasta,’ a type of internet hoax defined by Dictionary.com as ‘a block of text which is repeatedly copied and pasted by individuals over various online forums and social media sites.’”

As Snopes noted in July, this disinformation spread in a moment of heightened racial tension following the murder of George Floyd, nationwide protests and alarm about reports of Black men who were found dead, hanging from trees. Amidst the civil unrest following the November 2020 presidential election, this disinformation campaign reemerged, exploiting widespread anxiety and increasing fears of violence. A variation of the original message with slightly altered phrasing quickly spread online and via text messages.

The NAACP has explicitly refuted issuing this warning and has further stated that they have not received any information to substantiate this alleged threat.

On November 5, reacting to the resurgence of this piece of disinformation, the NAACP updated their original July statement about the purported plans for targeted violence: “The National NAACP has not released any such statement. While we take all matters of racial discrimination and racial hatred seriously, these statements are not from the NAACP.” NAACP VP of Marketing and Communications Trovon Williams added, “NAACP has not come in contact with any such information…these are certainly divisive times, and mechanisms like this are utilized to bring dissension and to also bring fear.” 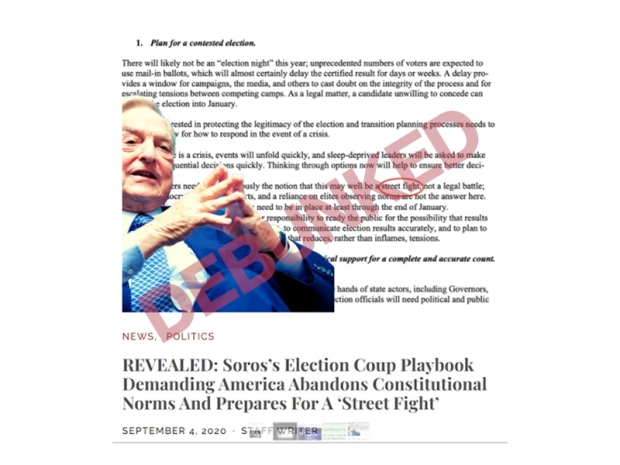 Disinformation: Claims of a Democratic Coup or Attempt to “Steal” the Election

Overview: As ADL reported in late September, a large number of right-wing voices, including members of the media, government officials, and many Trump supporters, have seized on the already tense and highly polarized presidential election season with conspiratorial claims that Democrats are planning a “coup” to steal the election from President Trump. Right-wing pundits continue to promote these allegations, while extremists on social media share related warnings of a coming civil war and incitement of violence.

Description: Coup accusations coming from the right primarily center around an August 2020 report from a group of experts (Democrats and Republicans who oppose Trump), which laid out a number of problematic post-election scenarios, most involving postulated efforts by President Trump to “contest the result by both legal and extra-legal means, in an attempt to hold onto power.”

Right-wing ideologues have responded by claiming the report is evidence of plans for a left-wing coup. Michael Anton, former national security adviser to President Trump, wrote in a September 4, 2020, article “The Coming Coup?” that “Democrats and their ruling class masters are openly talking about staging a coup.”

During the September 21 edition of Breitbart News Tonight, Eric Eggers, author of “Fraud: How the Left Plans to Steal the Next Election,” claimed that George Soros is funding organizations that “round up and wrestle as many potential voters – illegal or otherwise – as they can” in an effort to commit voter fraud.

Some extremists and mainstream individuals are actively promoting the notion that people should arm themselves and prepare for violence, using the claims that Democrats are planning to undermine the election to justify these recommendations. Michael Brown, a county commissioner in Kansas, called on Americans to “buy a firearm and ammunition” in preparation for a “coming war,” which he blamed on Democratic leaders. A user in a Three Percenter Facebook group urged others to “start slowly preparing now: food, ammo, fuel.” Bill Roper, leader of the white supremacist Shield Wall Network (SWN), posted a piece to his site that encourages readers to prepare for impending civil war and balkanization by buying guns, ammo, rice, beans and bleach. White supremacist Andrew Anglin, one of the defendants in the federal case brought against the organizers and leaders of the 2017 “United the Right” rally in Charlottesville, Virginia, wrote, “it’s going to be a wartime battle on the streets” after the election.

Numerous examples of violent rhetoric and warnings about a coup, civil war, or other attempts to steal the election can be found on Telegram and on Gab, both platforms frequented by extremists. A Gab user wrote, “We are in the middle of a color revolution and a coup. Remember that my friends.” 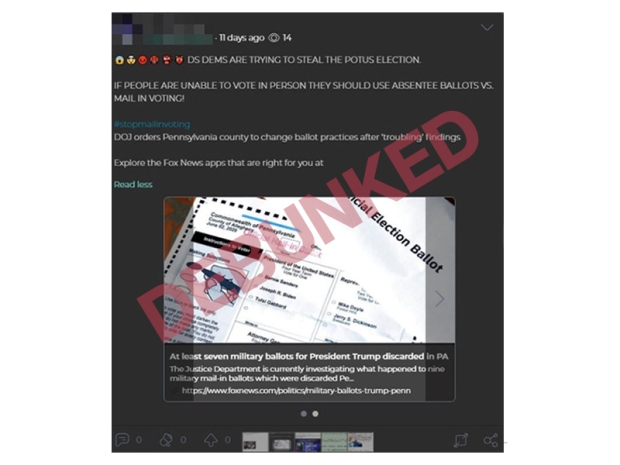 Overview: Allegations that Democrats are attempting to “steal” or “rig” the election are widespread. These claims, widely promoted by prominent mainstream sources and reiterated on extremist platforms, largely focus on misrepresented or fabricated reports about mail-in ballots.

Description: Despite numerous studies and statements from federal authorities that debunk claims of widespread voter fraud in U.S. elections, a significant percentage of voters, especially Republicans, believe that voter fraud is a major concern. False claims about mail-in voter fraud in the run-up to the 2020 presidential election include the allegation that Democrats are harvesting a high volume of fraudulent ballots, in addition to conspiracies about coordinated efforts to dispose of ballots cast for Trump.

A Harvard University study published in October 2020 concludes that, unlike other disinformation campaigns which are primarily driven by social media, this disinformation campaign about alleged voter fraud associated with mail-in ballots “was elite-driven, and waged primarily through mass media responding to false assertions from President Trump, his campaign, and the RNC.” President Trump has repeatedly spread misinformation which sows distrust in mail-in voting. He has stated in official White House briefings that “mail ballots are a very dangerous thing for this country, because they’re cheaters…there’s a lot of dishonesty going along with mail-in voting” and that “the Democrats are meddling by wanting and insisting on sending mail-in ballots…where there’s corruption all over the place.” He has repeated similar misleading claims during interviews, debates, and on social media.

Mainstream and extremist sources and social media users also continue to frequently share disinformation about mail-in voting. For example, anti-Muslim activist Pamela Geller, the conservative media site The Blaze, and Charlie Kirk of Turning Point USA were among those who recently posted misleading information about Pennsylvania allegedly rejecting hundreds of thousands of mail-in ballots; the original ProPublica/Philadelphia Inquirer report, however, was about requests for mail-in ballots. On his podcast, “Humans Rights Radio with David Duke,” white supremacist David Duke and guest Mark Collett predicted that “the ZioTyrants may steal [the election] with ballot fraud” and referred to the “craziness that is about to be hoisted upon us masquerading as an election.”

On Telegram, a platform popular among white supremacists, posts claiming that Democrats will take advantage of mail-in voting to steal the election are widespread. On Gab, another platform frequented by extremists, a user replied to a post from President Trump urging supporters to “volunteer to be a Trump Election Poll Watcher” by writing “#we all know #democrats are going to try and steal the #election. #YOU GET INVOLVED and stop them.”

In a Facebook group for the anti-government extremist Three Percenters, a member alleged that the left is using mail sorting machines to identify ballots for President Trump so that they can be discarded and replaced with a “faked replacement ballot” and that “this ended up being a hell of a lot worse than ballots in a dumpster, it is that plus opposite votes being cast in their place...The election will be stolen.”

Description: Two weeks before Election Day, registered Democrats in Florida, Pennsylvania, Alaska and Arizona received emails, purportedly from the Proud Boys, threatening the voters if they didn’t cast a ballot for President Trump.

"Vote for Trump or else!" the email began. "We are in possession of all your information (email, address, telephone… everything). You are currently registered as a Democrat and we know this because we have gained access into the entire voting infrastructure. You will vote for Trump on Election Day or we will come after you. Change your party affiliation to Republican to let us know you received our message and will comply. We will know which candidate you voted for. I would take this seriously if I were you."

Authorities say the emails were routed through servers in Saudi Arabia, Estonia and the United Arab Emirates, but originated in Iran. Proud Boys leader Enrique Tarrio, who also leads the Florida chapter of Latinos for Trump, denies any involvement. "The truth is, we're never gonna do that," Tarrio told the Miami New Times. "We don't care enough to intimidate anyone. And we're never gonna do that, period."

The Proud Boys are a far-right group that embraces Islamophobia, misogyny and violence against “the left.” Their members have been linked to multiple violent crimes. 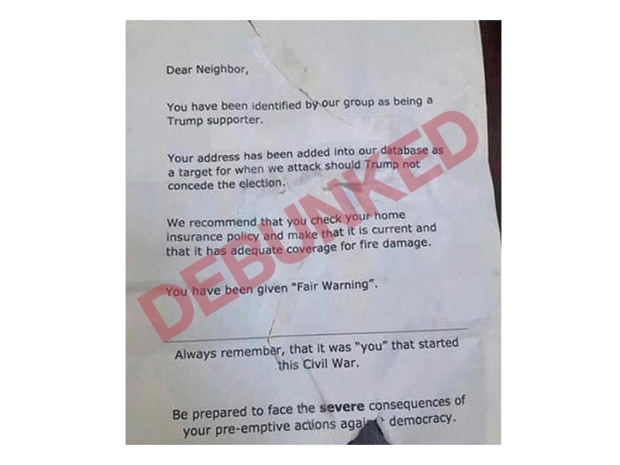 Overview: Social media users are posting images of a threatening letter purportedly sent to supporters of President Trump. It is not clear how many people received the letter, but it is circulating widely online.

Description: A homeowner in New Hampshire reportedly received a letter identifying them as Trump supporters and threatening them with arson. The text of the letter:

“You have been identified by our group as a being a Trump supporter.  Your address has been added into our database as a target for when we attack should Trump not concede the election. We recommend that you check your home insurance policy and make that it is current and that it has adequate coverage for fire damage. You have been given “Fair Warning.” Always remember that it was “you” that started this Civil War. Be prepared to face the severe consequences of your pre-emptive actions against democracy.”

Claims about the letter have also circulated widely on social media. Matt Schlapp (chair of the American Conservative Union) tweeted that the letter has been found in “Kansas City [Missouri] neighborhoods,” prompting police in Kansas City to urge people to research the post before sharing it, warning that it could “spread fear and division.” Kansas City police have repeatedly said they have no reports of anyone in the city receiving the letter.