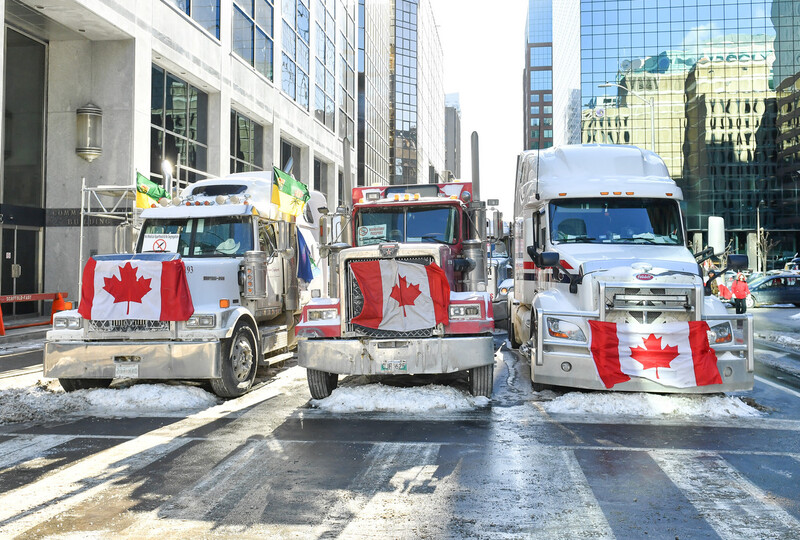 Truckers line up their vehicles on Metcalfe Street as they honk their horns in Ottawa, Canada on February 5, 2022. | Minas Panagiotakis/Getty Images - Source: Politico

For the second time since February 13, an unknown hacker leaked information from GiveSendGo, a Christian-oriented crowdfunding website, revealing identifying information of people donating both to Canada’s “Freedom Convoy” protest and the January 6 demonstration outside the U.S. Capitol. The leak also revealed donations to plan a similar convoy in the United States and contributions to the defense fund for Kyle Rittenhouse, the teenager who fatally shot two people during unrest in Kenosha, Wis., in 2020.

Establishing a connection between events can often be best understood through analyzing who funds them. ADL researchers found that 1,100 people donated to both the Freedom Convoy, a two-week running protest against Covid-19 mandates and restrictions mounted by truckers who have blockaded the Coutts border between the United States and Canada, and activity on January 6.

Funding for January 6 and the Freedom Convoy does not necessarily mean support for violence or extremism. The blockade in Canada is ostensibly based on concern of government overreach regarding vaccination. Both events promoted distrust of government and are based on disinformation. Similarly, both protests have stirred violence from participants. Four protestors from Alberta have been arrested for conspiracy to commit murder against members of the Royal Canadian Mounted Police. A mob of approximately 2,000 to 2,500 people stormed the U.S. Capitol, resulting in the deaths of five.

The biggest funder of both campaigns is Jim Hoft, the editor in chief of Gateway Pundit, a far-right news site. Earlier in February 2022, Hoft was permanently suspended from Twitter for violating its civic integrity policy due to promoting disinformation about the 2020 presidential election. Mr. Hoft is also associated with the Justice League of America Vote Fraud Investigation, American Gulag for Jan 6 Political Prisoners, Help Gateway Pundit Fight GA (Georgia) Left Group’s Assault, Justice League of America Audit Reporting, TGP (The Gateway Pundit) Fights Back Against Big Tech Censorship, and Justice League for America Against Tech Censorship. As of the time of the leak, Hoft has raised $345,000 from these campaigns.

Funders’ names are self-reported and were identified via their email addresses. Thus far, the Freedom Convoy campaign has raised around $9,577,000 of which the average donation is $84.69. The top 1% of donors by contribution account for approximately 18%, or $1,747,500, of these funds, while only accounting for 1% of all individual donations. Fundraising for the January 6th demonstration was much smaller by comparison with a total of about $669,000. The funding proportions were similar though, with the top 1% accounting for 19.5%, or $130,525 of contributions. The average donation was also comparable, settling at $81.90. A grassroots movement tends not to have lopsided donor dispersion like this.

Extremists from various far-right movements have also voiced their support for the truckers’ cause. While ADL has not found extremists planning any decisive or violent action, users on Proud Boys channels, the white nationalist site Stormfront, and White Lives Matter groups have posted in solidarity with the truckers, sharing flyers advertising rallies.