A new report this week suggests the Department of Homeland Security seems to be willfully ignoring the threat posed by right-wing extremism; a new task force has been convened by two Jewish organizations to track anti-religious violence; and Utah enacts a new, improved and comprehensive hate crimes law.

Read on for more on these headlines, news you can use to fight hate this week, and the latest info about ADL around the country.

“The group in question was a branch of analysts in DHS’s Office of Intelligence and Analysis (I&A). They focused on the threat from homegrown violent extremists and domestic terrorists. The analysts there shared information with state and local law enforcement to help them protect their communities from these threats.“ Daily Beast:

After an hour-long, and at times emotional, public signing ceremony for SB103 on Tuesday in the Capitol Rotunda, people convicted of a crime in Utah could now face additional penalties if it’s proved they targeted their victims based on membership in a protected class — including ancestry, disability, gender identity, national origin, age, military service, race, religion or sexual orientation. The Salt Lake Tribune: 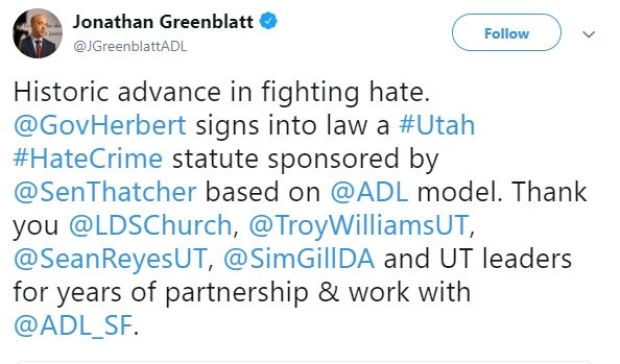