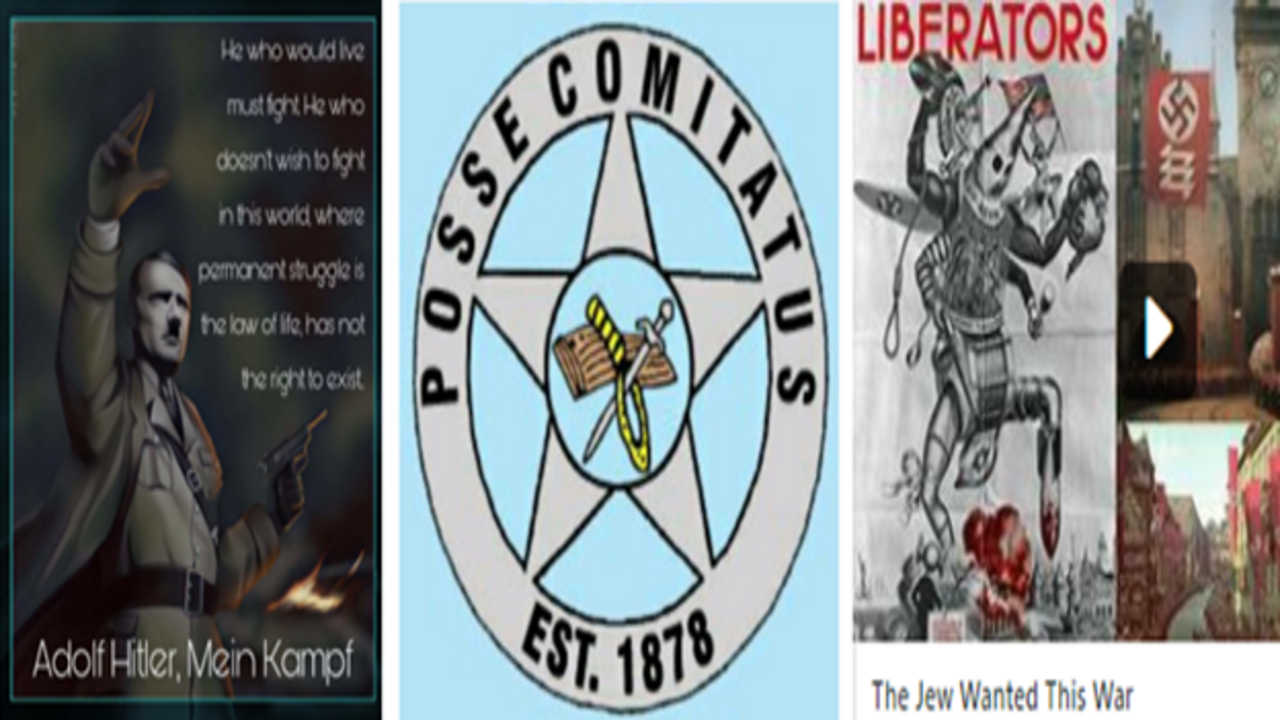 ADL: Nearly 25 Percent of Right-Wing Extremist Candidates Identified by Center on Extremism Have Won Their Primaries in 2022

As the primary season comes to an end, the ADL Center on Extremism (COE) continues to monitor a range of candidates who hold extreme views, associate with extremists, spread disinformation and/or promote potentially dangerous conspiracy theories. In the course of this research, the COE has identified two particularly concerning failed extremist candidates who hold anti-government and white supremacist ideologies and have shared antisemitic views online.

These men did not openly express or share their extreme views during the primaries or in candidate forums.

Each man received more than 1,000 votes but both ultimately lost their bids for office. While unsuccessful, their candidacies are a stark reminder that extremists, some of whom may purposefully hide their extremist beliefs, continue to seek public office with the hope of influencing mainstream society.

COE has been tracking McClanahan for years. An adherent of the racist and antisemitic religious sect Christian Identity, McClanahan has attended Church of Israel, a Missouri based Christian Identity church led by Dan Gayman, as well as events organized by the Knights Party, an Arkansas-based Christian Identity Klan group led by Thomas Robb. In 2019, he wrote an article for the Knights Party’s newsletter, The Torch, about his radicalization in the wake of “Unite the Right” rally in 2017. That same year he posted an image of his membership card to the League of the South, a white supremacist group that advocates for southern secession and an independent, white-dominated South.

McClanahan with Knights Party leaders Thomas and Jason Robb and at a cross-burning circa 2019.

On the Russian social media site VKontakte, McClanahan uses the screen name Gordon Kahl. Kahl was a member of the far-right anti-government Posse Comitatus movement and Christian Identity adherent who was involved in two fatal shootouts with law enforcement in 1983. 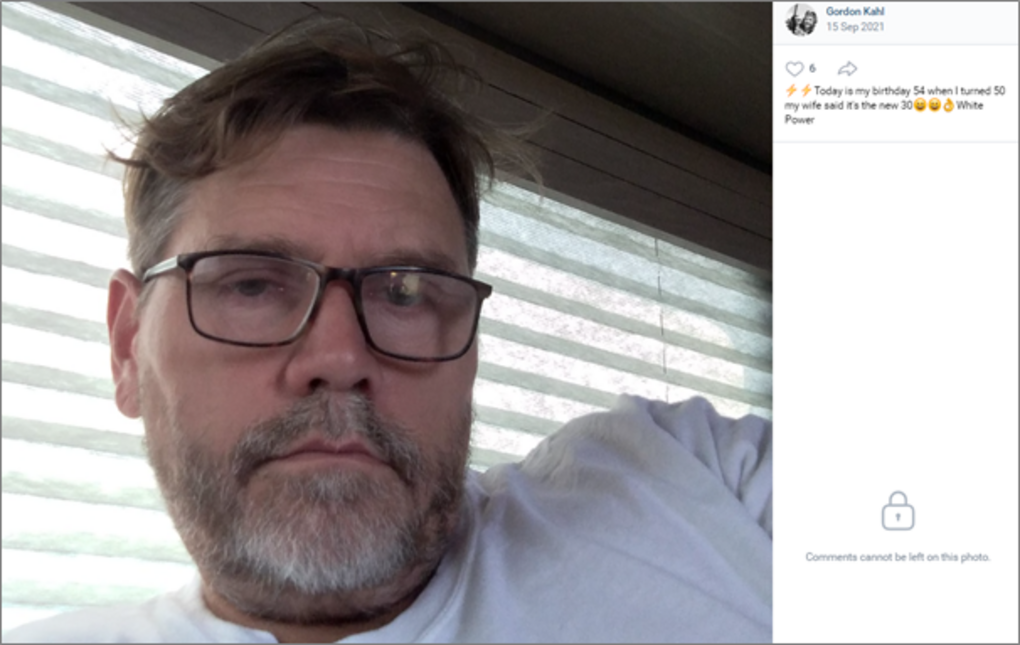 McClanahan’s social media posts include antisemitic, anti-government, white supremacist and bigoted content. And, as recently as July 2022, McClanahan made appearances on Euro Folk Radio, a radio show hosted by Eli James. James is an Illinois-based Klansman and Christian Identity preacher.

Former candidate for the North Carolina House of Representatives (District 65), Joseph A. Gibson III of Stokesdale, North Carolina, is a white supremacist and anti-government extremist. In the May 2022 Republican primary, Gibson received 20.1% (1,455) of the votes losing to incumbent Reece Pyrtle. 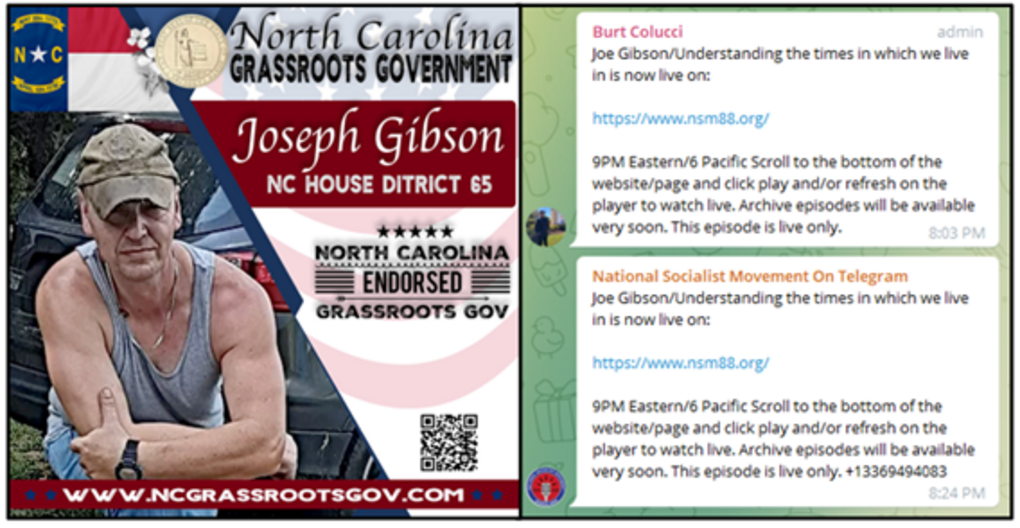 ADL Center on Extremism discovered Gibson’s extremist ties in May 2022 after the neo-Nazi National Socialist Movement (NSM) promoted his candidacy on their Telegram channel, claiming Gibson as “one of our members in NC” and posting a link to a mainstream media profile of Gibson that described him as a “political newcomer” running to represent North Carolina’s Rockingham County.

Gibson’s extreme ideologies are not on display in the short media interview, but he does use the phrase “our leaders are misleaders,” which is part of a quote from Jordan Maxwell (aka Russell Pine). Maxwell, who died in March 2022 at the age of 82, was a longstanding conspiracy theorist and anti-government extremist who promoted religious and secret society conspiracy theories, “New World Order (NWO)” conspiracy theories and the concepts of the anti-government “sovereign citizen” movement.

In podcast appearances and on social media, Gibson references Maxwell’s work and shares conspiracy theories referencing the New World Order. “New World Order” conspiracists claim a tyrannical, socialist “one-world” conspiracy has already taken over most of the planet and is scheming to eliminate American freedoms with the help of collaborators within the government. Gibson also regularly promotes the Republic of the united States of America (RuSA), which is what remains of James Timothy Turner’s sovereign citizen group following Turner’s conviction on tax fraud charges.

COE researchers found that Gibson has also posted white supremacist content and simulcasted his podcast, “Understanding the Times in Which We Live,” on the neo-Nazi National Socialist Movement’s Media Network.

Gibson has used these podcasts to share racist jokes, promote the NSM and their events, and chat with NSM members and supporters, including the group’s leader, Burt Colucci. In a February 2021 podcast, Gibson claimed he was not himself an NSM member but went on to say, “I do believe in what Burt and the organization [NSM] stands for and I do believe they should be a recognized party on the ballot.”

In another podcast that month, Gibson promoted the NSM’s April 2021 rally in Phoenix, Arizona: “They got a rally coming up in Phoenix, Arizona. I’m thinking about heading down there and joining up with them there...Maybe with the bullhorn with Burt...he may give me permission to speak, who knows...if you wanna meet Joe Gibson, you come on down there.”

Following the February 2022 arrest of Burt Colucci and two other men for their alleged role in the assault of a Jewish man during an Orlando neo-Nazi demonstration, Gibson took to GAB to blame Jewish “deceivers and liars” for the arrests.

Gibson has also been an occasional participant on the NSM’s Telegram channel. In November 2021, the channel promoted a livestreaming event hosted by NSM Media featuring Gibson.

According to conversations in the NSM channel, Gibson’s show was allegedly terminated because he “looked just awful, wearing a wife beater and dirty old hat that didn’t fit his head properly... He just was not representing Nazis very well.”  However, on April 5, 2022, Gibson greeted the same channel using 88, a white supremacist numerical code for “Heil Hitler,” and noted he “lost contact with everyone” after his podcast was shut down.

As a 501c3 organization, ADL takes no position on behalf of or in opposition to any candidate for office. In making public statements on this issue, spokespersons should make clear that the purpose of the report is to raise awareness of troubling rhetoric expressed by candidates currently running for office. Voters should make their own decision based on that information.