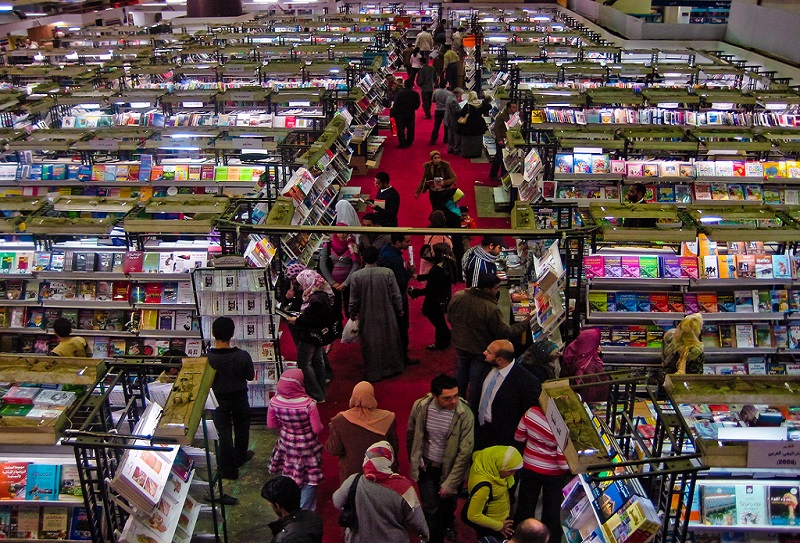 Intentionally or not, U.S. allied governments across the Arab world are providing a stamp of legitimacy for hateful anti-Semitic books of the absolute worst kind.  After an intensive review of offerings at state-run book fairs in the Arab world, ADL has determined that the vast majority of such events have provided a platform for egregiously anti-Semitic reading materials, among other content.

From December 2018 through December 2019, ADL monitored online search engines of exhibited materials for state-run book fairs in Doha (Qatar), Abu Dhabi (UAE), Kuwait City (Kuwait), Muscat (Oman), and Jeddah (Saudi Arabia).  In every one of these instances, the events listed numerous examples of anti-Semitic books through their online platforms and apparently on site as well.  This fits with findings during this same period by the Simon Wiesenthal Center for book fairs in Cairo (Egypt) and Sharjah (UAE) as well.

Unfortunately, ADL confirmed that several foundational anti-Semitic screeds were still quite common at these events, including Hitler’s Mein Kampf, The Protocols of the Elders of Zion, and The International Jew.  In the case of the Kuwait City Book Fair held in November 2019, ADL even found that some copies of Mein Kampf and The International Jew were listed in the event’s online catalog under Children’s Books.

ADL also documented dozens of other anti-Semitic books promoted in the catalogs for one or more of these state-run events.  Some illustrative titles included The Jews: A Caravan of Evil in History, Talmud of Secrets… Facts Exposing the Jewish Plots to Control the World, The Myth of the Nazi Gas Chambers, Theodore Herzl: The Zionist Devil and Satan of the Modern Age, and Blood for the Matzah of Zion.

This is not to suggest that these governments are necessarily seeking to promote anti-Semitism – indeed, in some instances it is just the opposite – but at the very least they lack an understanding of anti-Semitic stereotypes and historical context necessary to identify those books that are unacceptable for sale under official auspices.

In a few of these cases such hateful books may also be historically significant for scholars.  However, such content should not be promoted at a government-run book fair for the general public, and sellers would still have a responsibility to make clear that such works are bigoted and inaccurate, which is not happening in these cases.

Indeed, ADL believes that Arab governments should block such materials from state-run events as a matter of their own self-interest.  Such books represent hate speech, defamation, and a threat to pluralism, let alone a possible added impetus for hate crimes or terrorism.   They also represent a public relations nightmare and blur the distinction between truly bad actors and those states that genuinely want a more peaceful future for the region.

Such content should also be a concern for U.S. officials and international organizations, who frequently participate in these events.  For example, the American Embassy belatedly closed its booth at the 2019 Cairo International Book Fair after hateful materials were discovered at the fair that year.  UNESCO also received embarrassing criticism for sponsoring a year of book-related programming in the UAE emirate of Sharjah when it emerged that the 2019 Sharjah International Book Fair provided a platform for hateful books, among other materials.

ADL has been sharing the results of this research with Arab governments in hopes they will now block such books from state-run book fairs in 2020.  In just the last few weeks, two divergent responses have been particularly telling.

On the one hand, Qatar appears to have made significant improvements in this area, eliminating nearly all of the anti-Semitic book titles from its 2020 book fair, provided its online catalog for the event was still an accurate representation of what was for sale on site.  With encouragement from ADL, U.S. officials have been pressing Qatar to make this change over the last year, and it appears that Doha made the right choice in this one issue area when confronted with the relevant concerns.

Egypt, on the other hand, failed to take corrective action this year even though ADL proactively shared extensive data on the issue with the relevant Egyptian authorities.

The 2020 Cairo International Book Fair, formally held under the auspices of Egyptian President Sisi’s office this January, provided a platform yet again for many of the most hateful books that defame the Jewish people.  For example, in addition to the Protocols, Mein Kampf, and The International Jew, the 2020 Cairo International Book Fair provided a platform for books that claim there is a secret Illuminati plot aimed at world domination by interdimensional lizard people and Jewish money.  These books were promoted at the fair by a private publisher ADL had specifically urged the Egyptian government not to admit this year.  That publisher also hosted a signing at its booth for another anti-Jewish book, called Hidden World Government 10: Protocols of the Elders of Zion, the Masonic Plots to Control the World.

ADL also sent a letter to Oman’s Sultan Haitham bin Tariq Al Said raising concern about egregiously anti-Semitic books at this week’s Muscat International Book Fair, in spite of ADL proactively flagging these and other titles in English and Arabic with Omani government officials in advance of the 2020 fair.

Governments throughout the region have a legal, moral, and strategic duty not to exhibit such content at their state-run book fairs.  And in the meantime, U.S. officials and civil society must continue to speak out.