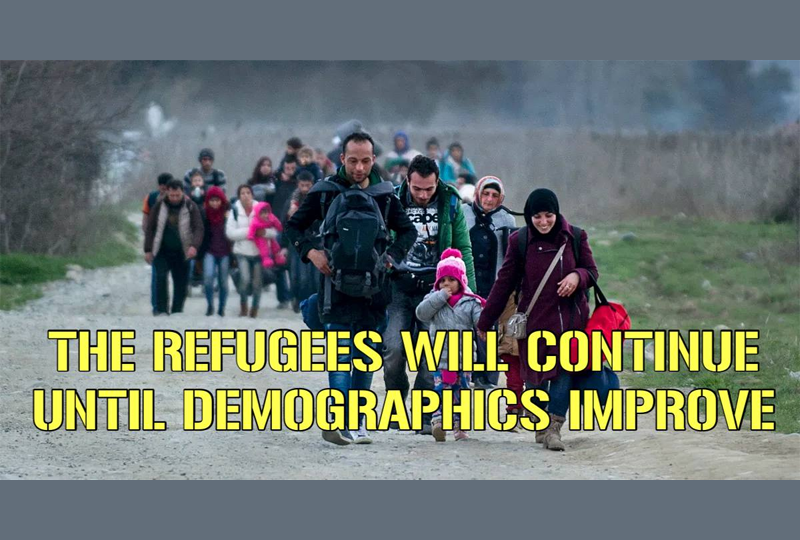 Right wing extremists frequently use national and international conflicts as platforms for their bigoted narratives. Since the U.S. withdrawal from Afghanistan and in the face of ongoing humanitarian and military crises, extremist online spaces have been rife with racist, Islamophobic and antisemitic tropes.

The August 26, 2021, attack in Kabul by the Islamic State Khorasan Province (ISKP), refugee and evacuation efforts and the growing mainstream criticism of President Biden presented myriad opportunities for extremists to further elevate racist, xenophobic sentiments via cries about “the Great Replacement,” a white supremacist conspiracy theory that envisions the intentional replacement of white majorities at the hands of nebulous Jewish forces.

Much of this content has been shared by white supremacists, who are railing against potential immigrants and refugees from Afghanistan as well as Jews and Israel, while applauding the Taliban’s underdog “victory” over American forces. Islamophobes and conspiracy theorists are also weighing in, to a lesser extent.

Online responses from white supremacists can be loosely separated into the following themes: Anti-immigrant or anti-refugee content, expressing fear of an “invasion” and demographic shifts, pro-Taliban and anti-American content, celebrating an underequipped insurgent group successfully defeating a global power.

The Great Replacement, or replacement theory, emerged out of early 20th century French nationalism and is frequently cited by white supremacists who claim there is a plot to perpetrate “white genocide.” Common uses of the narrative include conspiratorial claims that there is a plot to intentionally import immigrants or non-white individuals to change demographics or voting blocks. Extremist murderers like Robert Bowers, Brenton Tarrant, John Earnest and Patrick Crusius have referred to the theory as motivation for their targeted attacks.

Posts referring to Afghanistan and Afghan refugees, meanwhile, allege that an influx of these refugees, with their “high birth rates” will create white minority countries. White supremacists also claim that liberals care about Muslim women and children under the Taliban but ignore white women and girls allegedly victimized by refugees of color, and that there is a political motive for accepting refugees who will theoretically vote for Democrats.

Non-extremist conservatives and various QAnon adherents alleged on Telegram that Afghan refugees would change voting patterns and that the U.S. military and President Biden should be removed.

Islamophobe Pamela Geller posted an August 26, 2021 piece to her “Geller Report” site: “While Our Marines Are Slaughtered, Biden Resettles Hundreds of Afghans in Battleground States Pennsylvania, Arizona, Florida, Texas.” In the piece Geller alleges that the withdrawal is “killing patriots while ensuring illegal election fraud in key battleground states,” spreading a baseless conspiracy that immigrants or refugees are intentionally resettled to influence elections.

A poster to the “We The Media” Telegram chat, a QAnon slanted chat, expressed concern that refugees would feel an allegiance to President Biden: “All the refugees will vote for Biden and the democrat down ticket. They will be loyal. Sickening!!!!”

During an August 17, 2021, stream of his “America First” program, white supremacist Nick Fuentes said, “Afghanistan has a population of 38 million, one of the highest fertility rates in the world…4.5 children per woman. And now apparently we have to have an open-ended commitment to accept refugee resettlement even on the other side of the world indefinitely.” Later in the program, he demanded, “Why now do I have to live in a neighborhood with foreigners? Why now do my kids have to go to school with Afghan kids? Why do my future kids have to live in a country riddled with crime, where no one speaks the same language, that’s not Christian, that’s not white, and no one looks like them?”

The bigoted and misogynistic “Western Chauvinist” Telegram channel, linked to the Proud Boys, posted on August 16, that “we don’t support this plane full of sub-humans being allowed to invade our soil either. No more Afghan refugees sent to the USA or Europe! Send them to Israel where they belong.” 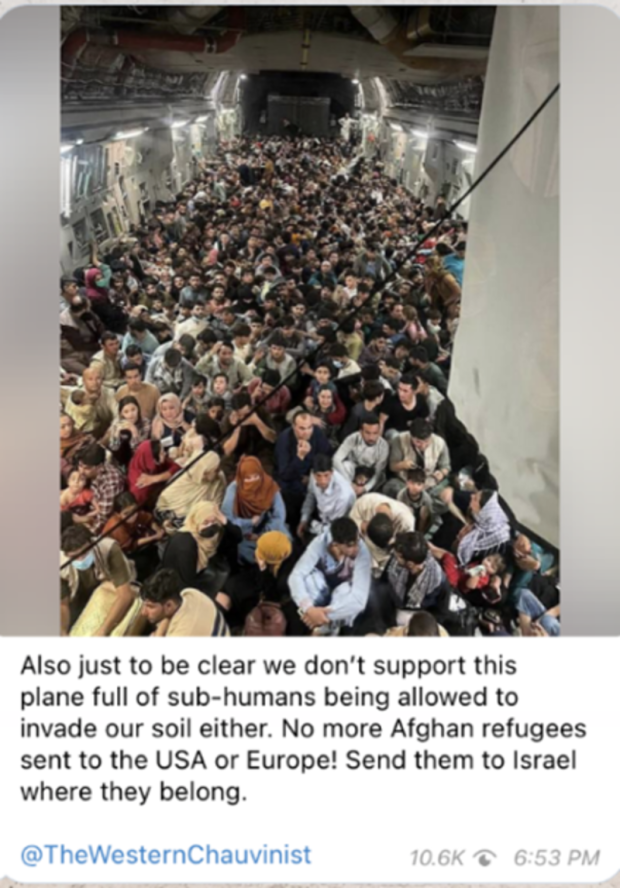 Multiple far right Telegram channels, including white supremacists and QAnon outlets, have posted antisemitic conspiracies regarding the Jewish community’s efforts to aid Afghan refugees. Some refer broadly to the Jewish people, while others focus specifically on Jewish social service organizations like HIAS.

Extremists on white supremacist and QAnon Telegram channels are blaming Israel for the policy of sending Afghan refugees to “Western” countries, while claiming that Israel is not accepting any refugees, often using the phrase "Open borders for Israel.”

An August 16, 2021 poll in the “GhostEzra” Telegram chat, associated with the influential, virulently antisemitic QAnon page with over 300,000 subscribers, received more than 32.3K responses to the prompt “Israel should take in some Afghan refugees,” with 75% responding “yes.” 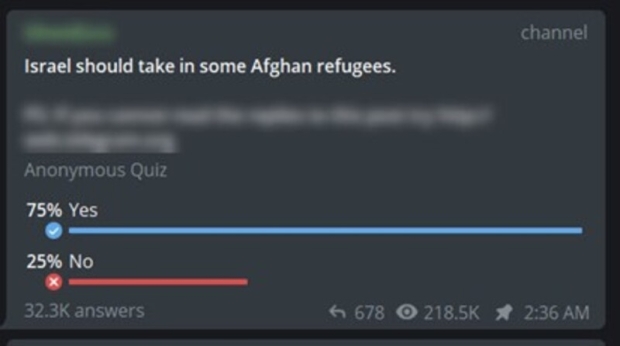 A Telegram channel linked to antisemite and white supremacist Mike Peinovich posted on August 21 a list of Jewish and Israeli aid organizations, claiming that Israel intentionally spreads migrants in other countries as part of some conspiracy. The same text was posted by numerous other accounts shared in multiple QAnon related chats: “List of Israeli and Jewish Refugee organizations. None of these organizations settle refugees inside of Israel. This list is not complete or comprehensive, but it gives you an idea how much Israel is involved in global migration and how interested they are in moving third world people into Europe.”

Some white supremacists overtly celebrated the Taliban’s takeover of Afghanistan, cheering any actions that would embarrass the U.S., writing admiringly about the Taliban’s brutal tactics and commending the Taliban for its insurgent victory over a global power.

White supremacist Vincent James of the Red Elephants praised the Taliban while mocking the administration in a post on August 15, 2021, writing: “To be honest, the Taliban is epic. A bunch of kids cut off from the world, way more radicalized than their parents were, grew up and just completely dominated an entire country on multiple occasions, using guerrilla warfare against the U.S. backed mujahideen and other militias. One [sic] they took power in the 90’s, women were banned from having a say in anything, rapists were castrated, looters and thieves got the wall, TVs were smashed, and degenerate media was banned.”

Posting again to Telegram on August 15, James wrote that the Taliban’s tactics against American forces were something to appreciate, and possibly mimic in the U.S.  “There’s a reason the FBI infiltrates and dismantles American militias immediately after they form. They understand what armed and decentralized guerrilla militias are capable of.” 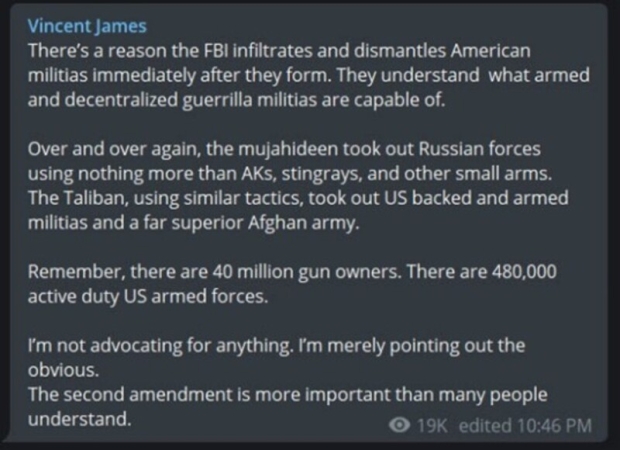 Longtime white supremacist and antisemite David Duke released multiple radio programs addressing this topic, during which he made antisemitic, anti-government, and pro-Taliban claims. During the August 27, 2021, episode Duke and guest Mark Collett, a British white supremacist with an active social media audience across the English-speaking world, discussed how armed insurgents motivated by freedom can overcome outside forces. Duke said, “The Taliban outlasted the American and ‘allied’ militaries in Afghanistan because Afghanistan is their home and they are dedicated.”

On his “America First” show, white supremacist Nick Fuentes praised the Taliban, saying, “Every white pill, there is a black pill… Yesterday we were so happy, overjoyed, Taliban wins the war in Afghanistan…unequivocal defeat for the great Satan, unequivocal defeat for this Jewish transnational elite military industrial complex…they’re humiliated.”

Rinaldo Nazzaro, the founder of the neo-Nazi group the Base, posted to his Telegram channel on August 12, 2021, writing, “The lesson we should learn from the Taliban is that sometimes violence *is* the answer and can even be used successfully against the United States. In fact, America has never decisively defeated a guerrilla insurgency anywhere in the world. The Taliban is just another example of how longterm [sic] resolve and active resistance pays off in the end.”

Islamophobic Claims About Terrorism and Violence

White supremacists and anti-Muslim activists are promoting the bigoted claim that Afghan refugees are dangerous criminals or terrorists.

On August 17, 2021, Michelle Malkin, political pundit and associate of white supremacists and right-wing bigots, wrote, “Imagine what the impact will be now—and don’t be naïve about the demographic and electoral consequences of recklessly throwing open the gates to these masses, let alone the public safety and national security implications of allowing untold numbers of refujihadis [sic] to blend in with the refugee population...”

On August 21, 2021, anti-Muslim bigot and right-wing provocateur Laura Loomer called for an immigration moratorium in the name of public safety, falsely accusing refugees of possibly perpetrating another attack on the United States.

In a post from August 26, after the suicide attack the at Hamid Karzai International Airport in Kabul, Loomer wrote, “Despite the tragedy that has unfolded today, I am glad that we are now finally having a conversation about the barbaric ideology of Islam and the dangers it poses to the world and our country. Enough calling people “Islamophobic.” It’s time for people to grow up and have a conversation about Islam and what Islamic terrorists are doing to innocent Muslims, Christians and Jews all around the world.” 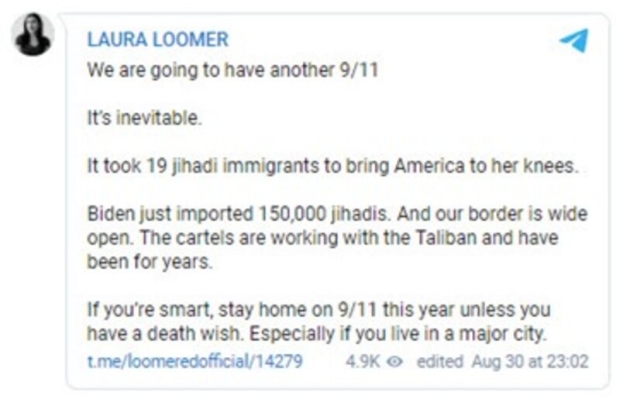 On August 30, 2021, Loomer said that another attack akin to September 11, 2001, was imminent, and called the refugees “jihadis,” writing, “We are going to have another 9/11 It’s inevitable. It took 19 jihadi immigrants to bring America to her knees. Biden just imported 150,000 jihadis.”