As Aleppo Burns, We Cannot Stand Idly By

“…the Jewish community has a special responsibility to speak out, having learned the price of the world’s silence…”

A few months ago, I wrote about Syria that “as bad as the situation is today from a humanitarian perspective, it could get even worse.” Now we have seen that terrible prediction come to pass, as pro-government forces bombard and wantonly execute civilians in Aleppo.

Indeed, today, Nedžad Avdić, a survivor of the Srebrenica genocide, wrote today in the Guardian that “Every time we thought it couldn’t get worse, it did.”

As the terror unfolds in Eastern Aleppo, we see the soul-crushing images of ordinary civilians, including countless children, running from place to place in the cold rain trying to find shelter from the constant bombing. One person was seen carrying his baby as the IV drip was still attached to his baby. Other reports indicated that more than a hundred children were trapped under the rubble of one building, but no one could reach them. In another area in Syria, the media reported on another chemical attack that resulted in the death of more than 80 civilians, including women and children.

These images haunt all of us. 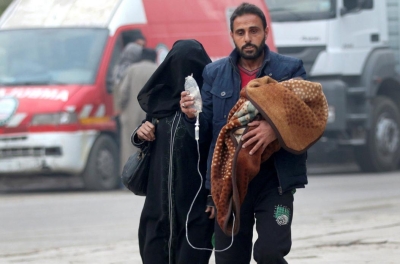 However, the Jewish community has a special responsibility to speak out, having learned the price of the world’s silence. The phrase “Never Again,” means not only a commitment to fight anti-Semitism, but ensuring that no group or people ever be subjected to such brutality.

Alas, the international community has not done well in preventing genocide and mass murder. Cambodia. Sarajevo. Rwanda. The Congo. Darfur. These names rightfully invoke outrage and shame because we stood idly by as innocents were slaughtered en masse.

Now we have Syria.

With all the legitimate questions about the complexity of the conflict, uncertainty of the potential outcome of military action this crisis has deteriorated over a five-year period to reach this devastating nadir.

We grieve at the images of the historic city of Aleppo crumbling under the constant barbaric siege by Assad and his Russian and Iranian allies. We have seen that for every moment it seems that from a humanitarian perspective it could not get any worse, it has.

Today we ask, how much longer can we stand by and allow the Assad regime, and his Russian and Iranian allies to murder and maim with impunity?

When the genocide in Rwanda took place 20 years ago, then too America did not act. President Bill Clinton described that decision in retrospect as the biggest mistake of his presidency.

Perhaps in time we will hear similar reflections from our current leadership.

But it is still not too late to act.

There is an urgent need to ensure aid access to Syrian civilians who are lack basic necessities of food, water, and medical supplies. The United States and our allies must insist and ensure that there is some measure of safe haven to those subject to the crushing attacks leveled by Assad and his ally Russia. There is no safe place for civilians to flee.

We are hopeful that a ceasefire and evacuation agreement will enable safe egress for civilians. But the United States must be ready to raise the costs to Assad and his allies of their current approach which disregards basic humanitarian norms. Because the fall of Aleppo does not mean the end of the civil war, but only the continuation of suffering to the people of Syria.

The Assad regime will continue its ruthless campaign of destroying schools, clinics and markets to bring local communities to their knees, as it proved to work quite effectively for him–as he has met little international repercussion for these crimes. 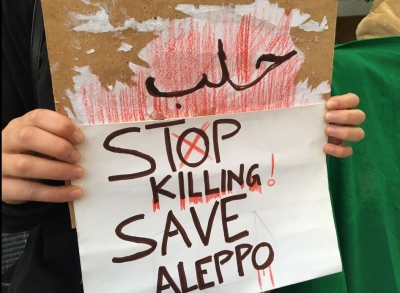 It is crucial that the next administration begin to think now how the U.S. can take a leading role in helping those under threat from Assad and his allies. It is time the United States matches rhetoric with actions. It is time to do more to ease the suffering of Syrians.

The test of the future U.S. administration of president-elect Donald Trump will be whether he is willing to stand up to the aggression of the Russian Federation and to the nefarious behavior of Iran throughout the region. An unhindered Russia and a triumphant Iran will surely spread further violence not only in Syria, but across the region and around the world.

The complexity of the conflict cannot be an excuse for continued inaction in the facing of increasing atrocity. We have seen the cost of this approach.

Aleppo is a stain on humanity that stands as a terrible reminder that there is simply no substitute for American leadership on the world stage.