Ali­son Weir, the direc­tor of the anti-Israel organizations If Amer­i­cans Knew and the Coun­cil for the National Inter­est, is behind a series of billboards that read “Help the USS Liberty Survivors Attacked by Israel.” 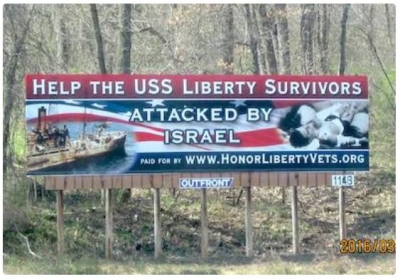 The billboards, which have appeared so far in California, Connecticut, Massachusetts, North Carolina and Pennsylvania, are “paid for by www.honorlibertyvets.org,” a website that promotes the anti-Israel conspiracy theory that Israel intentionally targeted a U.S. war­ship dur­ing the height of the 1967 Six-Day War. This website as well as the GoFundMe page raising money for the billboards are linked to anti-Israel activist Alison Weir.

The tragic assault by Israeli forces during the Six Day War in 1967 on an American vessel, the USS Liberty, has been a source of controversy and conspiracy theories since it occurred. Several government investigations have concluded that the attack, in which 34 American servicemen were killed and many more injured, was carried out in error. Furthermore, every piece of information declassified to date has supported this conclusion.

Nevertheless, the Honor Liberty Vets website claims Israel had a “motive” for attacking the American ship, stating “One hypothesis is that Israel intended to sink the ship (with no survivors) and blame Egypt because this might have brought the United States into the 1967 war.” The site also paints Israeli interests as trumping America’s: “No nation or people should be above the law; nor should American interests be subordinated to the interests of any foreign nation. Those Israelis responsible for ordering the attack and the resulting murder of American sailors must be held accountable for their actions.”

For Weir, and others who subscribe to the belief that Israel intentionally targeted the ship with the goal of killing American servicemen, the incident and the alleged U.S. government cover-up that followed powerfully demonstrate the supposed treachery and power of the Jewish State and its American supporters. The story, told from this perspective, has become a propaganda tool to undermine the legitimacy of Israel.

These theories about the USS Liberty fit into Weir’s worldview, in which the Jewish State is a violent aggressor that corrupts the American political system and prevents criticism of its conduct from being voiced by the mainstream media. As a result, she contends, Americans are kept in the dark about how their taxes fund Israeli mistreatment of Palestinians.

In Weir’s discussions of Israel’s influence, she often employs anti-Semitic imagery and portrays Israel as a ruthless force that controls American policy through brutal intimidation and deception. Weir views herself and her organizations as part of a growing movement to promote U.S. interests by educating Americans about the vast conspiracy to keep the truth about Israeli practices hidden from them.

Weir’s Council for the National Interest, an anti-U.S. aid to Israel group based in DC, previously employed billboards to disseminate its messaging with a 2013 cam­paign called “Stop the Blank Check to Israel.” At least ten such ads, which read, “$8 Mil­lion a day to Israel just doesn’t make sense! STOP The Blank Check.org,” were erected in Atlanta.