The alt right wants to reach the young people of America. To this end, some groups, as well as anonymous individuals, have posted racist fliers on campuses across the county promoting white identity and heritage. The fliers try to appeal to white college students by focusing on alleged dangers facing white Americans, including demographic changes and “white guilt.”

The alt right is a loose network of people and groups that promote white identity and reject mainstream conservatism of favor of politics that embrace implicit or explicit racism, white supremacy and anti-Semitism.

Since the beginning of 2016, alt right adherents have been responsible for dozens of episodes of racist flier placement at universities and colleges across the country. Two white supremacist groups, Identity Evropa and American Vanguard, as well as individuals connected to a white supremacist blog called The Right Stuff (TRS), are behind many of the flier incidents. 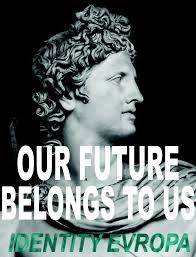 Identity Evropa is responsible for at least eight of the flier distributions at campuses, although it claims to have placed its fliers at almost 30 universities around the country. Identity Evropa is a small white supremacist group that falls under the alt right umbrella. Nathan Damigo, an Iraqi war veteran based in California, founded the group in early 2016. The group focuses on promoting white European identity.

Damigo was previously a leader in another white supremacist group called National Youth Front, which is now defunct. He is a student at California State University, Stanislaus.  Damigo has been influenced by the Identitarian movement in Europe, which promotes the idea of preserving white European culture. He has said he will use flier distributions at universities as one of his tactics to promote white nationalism.

The group has also tried to go beyond just posting fliers. In May 2016, Damigo, accompanied by alt right leader Richard Spencer, held a “free speech” event at the University of California, Berkeley. The two, joined by supporters, set up what they called a “safe space” at a plaza on the Berkeley campus where they debated issues around race and white identity.

American Vanguard, another new group created in 2016 and based in Southern California, also falls under the alt right banner.  On its website, the group explains, “Our religion, our traditions, and our identity are dragged through the mud by the globalist establishment while millions of nonwhites flood our nation every year. If current trends continue, White Americans will be a minority by 2044.”

The American Vanguard website boasts of an ongoing “Northern Propaganda Campaign” that consists of placing posters and meeting with allies, including Identity Evropa, TRS and Counter-Currents (which runs an white supremacist online journal and book publishing wing). This campaign’s propaganda has been intentionally directed at young people, particularly those on college campuses. In the last two weeks American Vanguard posters were found at Purdue University in Indiana, the University of Central Florida, Florida Gulf Coast University the University of Arkansas, Fort Smith campus and Emerson College in Massachusetts. 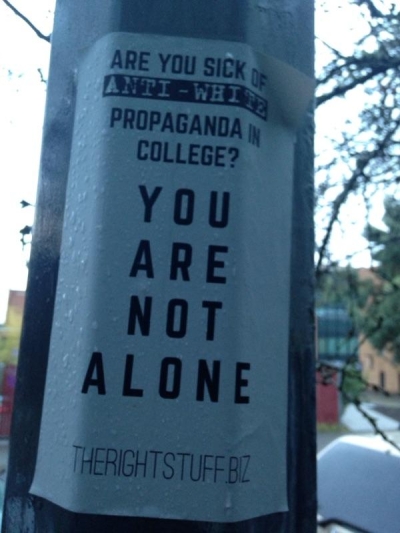 The Right Stuff (TRS) is a racist and anti-Semitic blog that was launched in December 2012. It identifies itself as an alt right site. TRS says that is wants to reinvigorate “dialogue among a disparate and edgy right-wing.” It focuses on various political issues and includes articles about alleged Jewish power and control of the media and government.

People connected to TRS were behind creating the “parentheses meme,” a series of parentheses around a Jewish name which is supposedly a visual rendition of an echo. The “echo” has been used on Twitter and other social media to identify and harass Jewish journalists and other Jews. Individuals promoting TRS posted fliers at Purdue University in Indianapolis, at the University at Albany in New York, Kent State in Ohio and Miami University in Oxford, Ohio, as well as in area near St. Paul, Minnesota campuses.

Other fliers, posted at UCLA, the University of Michigan at Ann Arbor, the University of Oklahoma at Norman and Southern Methodist University in Dallas, Texas, simply had a reference to the alt right but did not identify a particular group. The majority of these posters advised white women not to date black men. 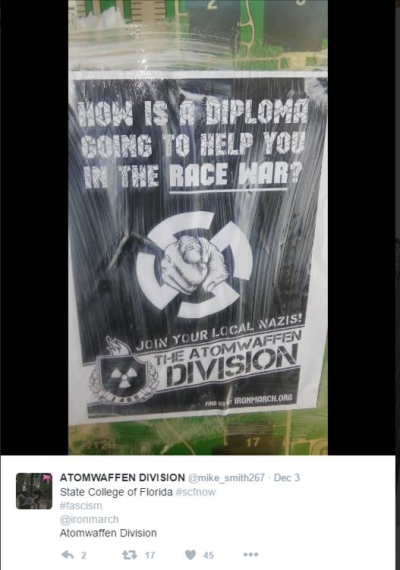 Extremist groups outside the alt right orbit have also been posting fliers at campuses. The Loyal White Knights, a Klan group based in North Carolina, posted fliers at Clemson University in South Carolina accusing Black Lives Matter and the Black Panthers of killing white people and police officers. Another group, the Atomwaffen Division, a loose group of neo-Nazis that reportedly formed about three years ago, has also been targeting campuses.  Posters from the group have been found at Boston University, the State College of Florida, the University of Colorado and the University of Chicago.  The posters urged students to join their local Nazis.

The targeting of college campuses is not new for white supremacists, who know that reaching young people is a way to grow a movement. Until recently the alt right has mostly been confined to online activities, with the exception of conferences held by extremists such as Spencer, who runs the white supremacist National Policy Institute, and Jared Taylor, who hosts white supremacist American Renaissance conferences. That appears to be changing as they try to use campuses to recruit young people.

Spencer is also trying to reach college students; he spoke about white identity and race at Texas A&M University in in College Station, Texas on December 6.