America Must Bring Up Incitement with Qatar's Emir 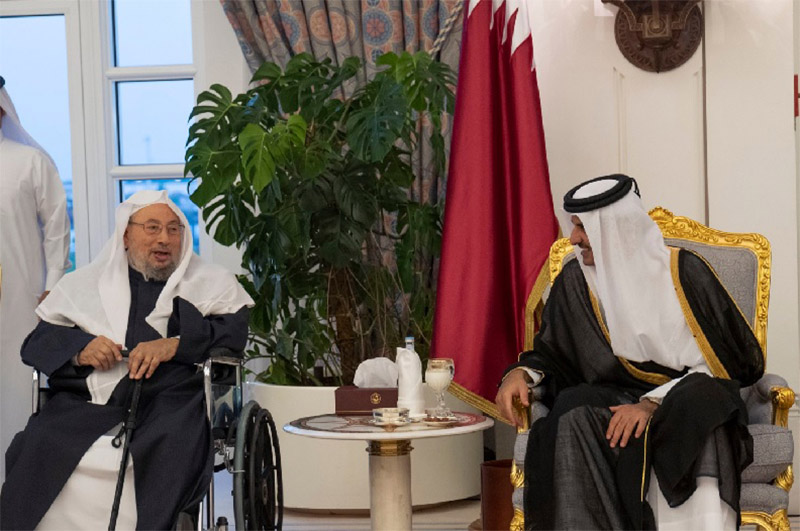 Qatar’s ruler Emir Tamim is scheduled to visit President Trump on Tuesday and will also be meeting with senior Members of Congress in Washington. According to the White House, the two leaders are expected to discuss regional developments, bilateral security cooperation, and counterterrorism issues, but U.S. officials would be well-advised to also bring up tolerance and incitement issues with the Qatari Emir, which is an area where his government has chronically fallen short.

Such incitement often targets Jewish people, whether in Israel or around the world, but it often also is aimed at other vulnerable communities as well, including Christians, Shi’ite Muslims, women, or LGBTQ people.

Qatar’s conduct in this regard is sometimes so disturbing that even some of its oldest friends are concerned. Tim Sebastian is a onetime BBC journalist who founded and chaired the Qatar Foundation’s Doha Debates. This past month he interviewed the spokesperson for Qatar’s Ministry of Foreign Affairs for a European network, and he confronted her about hate preachers at official Qatari venues.

Sebastian cited ADL’s discovery that in December 2017 a preacher named Muhammed al-Muraikhi delivered a sermon promoted and broadcast by the Qatari government that included the incitement of hatred against Jewish people. Sebastian noted that Muraikhi’s sermon “told Muslims that Jews have ‘enmity and hatred toward you in their blood and their veins.’ He described the Jewish people as ‘your deceitful, lying, treacherous, fornicating, intransigent enemy’ who ‘has despoiled, corrupted, ruined and killed and will not stop.’ And he called on all Muslims to ‘cleanse’ al-Aqsa from the ‘filth’ of the Jews.”

Sebastian also pointed out that the Qatari government provides guidance for their Friday sermons and reserves the right to punish clerics who break the rules. The Qatari spokesperson replied that “any description of any group in such terms is absolutely not acceptable, it’s discrimination, and we don’t approve of it.”

Yet as Sebastian noted, Muraikhi’s sermon was broadcast on state TV at the time and promoted by the Qatari government’s Ministry of Endowments and Islamic Affairs. He had a long record of inciting anti-Semitism and other forms of intolerance long before that appearance, and he remains to this day one of the two main preachers who deliver Friday sermons every week at the Qatari state’s Grand Mosque, which has capacity for 30,000 worshippers. The government regularly advertises his sermons in advance and continues to broadcast them on state TV. He was even the host of a daily program on moral and religious guidance for Ramadan this year on not one but two Qatari state television stations.

Unfortunately, this is but one example of the numerous ways in which Qatar’s government continues to propagate or provide a platform for intolerant preachers and hateful messages, including toward Jewish people. For example, ADL and the Middle East Media Research Institute each discovered virulently anti-Semitic passages in Qatari state textbooks this year, including the slander that Jewish people are treacherous, seek to conquer the world, and follow a perverted, invalid religion. The books also contained numerous examples of anti-Christian bigotry as well as incitement against the West.

ADL also found numerous anti-Semitic books being promoted in late 2018 by Qatar’s state-run book fair. Such notoriously anti-Semitic books included Hitler’s Mein Kampf, Henry Ford’s The International Jew, and David Duke’s anti-Semitic tract exaggerating and slandering Jewish influence in the United States, as well as other books titled The al-Aqsa Mosque and the Purported Temple, The Myth of the Nazi Gas Chambers, and Talmud of Secrets: Facts Exposing the Jewish Schemes to Control the World.

Thankfully, the U.S. Embassy raised concerns with the Qatari Ministry of Culture about providing a platform for these books. Some of the titles were then removed from the book fair’s website, but others still remained.

In addition to carrying preachers with a record of intolerance on Qatari state TV, the state-owned international network Al Jazeera broadcasts intolerant messages from Qatar around the world. As ADL noted in August 2018, Al Jazeera remains “a major exporter of hateful content against the Jewish people”. Examples include blaming Jews for worldwide corruption, repeated cases of Holocaust distortion or denial, constantly glorifying terrorists as “martyrs” so long as they target Israelis, providing an unquestioning platform for terrorist propaganda, and publishing messages that dehumanize or advocate genocide against Jews in the Land of Israel.

Qatar’s government funds the intolerant International Union of Muslim Scholars, whose current secretary general has advocated Holocaust distortion or denial as recently as May 2019. The IUMS’s previous secretary general, Yousef al-Qaradawi, was kissed by Emir Tamim and given the best seat in the house ahead of all other preachers at the ruler’s Ramadan iftar this May for at least the fifth year in a row. Qaradawi has justified terrorism and called for genocide against the Jewish people, and he continued to spread dehumanizing messages about Jews within a day of his embrace by the Emir.

As recently as this Ramadan, ADL documented that Qatar’s government continues to advertise, host, and broadcast sermons at state-controlled mosques by preachers who have had longstanding past records of encouraging bigotry or even violence. This has occurred not just at the Qatari Grand Mosque but also at Qatar’s Education City Mosque, which services the Qatar Foundation’s entire Education City campus, including the satellite campuses of six prestigious U.S. colleges: Cornell, Georgetown, Carnegie Mellon, Texas A&M, Northwestern, and Virginia Commonwealth Universities.

The mosque at Education City has hosted preachers with a past record of intolerance from the very first day of its operations in 2013. One sermon delivered at the mosque since then featured the message “kill the infidels… Count them in number and do not spare one.” Another, by a preacher who had previously wished that Hitler had “finished off” the Jews, similarly condemned “the aggressor Zionists,” urging God to “count them in number and kill them completely; do not spare [a single] one.”

Lastly, one would be remiss not to address Qatar’s ongoing and systematic support for the Muslim Brotherhood, which ADL has shown is a hateful extremist group that frequently propagates bigotry toward Jews and Israel. For example, Qatar continues to be aligned with Hamas, which is arguably the Brotherhood’s most violent and anti-Semitic country-specific offshoot. Regardless of ongoing debates in the U.S. about whether or not the Muslim Brotherhood and its branches may be engaged in terrorist activities, it is hard for anybody to persuasively contest that these groups are often a source of bigotry, especially but not exclusively toward Jewish people.

To be fair, Qatar’s record is not one of uniformly promoting hatred. Some of its laws, rhetoric, dialogue summits, and educational programs seem to be attempts at addressing some real problems of intolerance or extremism.

But Qatar’s simultaneous enabling of so many extremist messages would seem to nullify any of its activities to counter hate and is inconsistent with the values the U.S. should expect its allies to uphold. Having occurred so many different times in so many different areas makes this problem seem systematic and willful rather than a simple oversight, which is why U.S. officials must raise tolerance and incitement issues with Emir Tamim when he visits Washington.