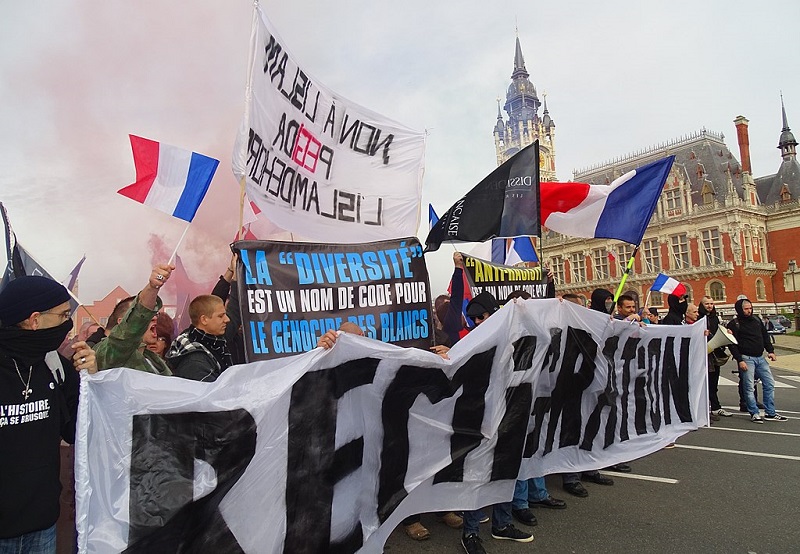 Online platforms have enabled white supremacist groups to tap into a global community, amplifying their racist views and connecting them with like-minded individuals.

While online activities help unify far-flung adherents, real-world connections outside these virtual platforms indicate a true commitment to their cause.

A white supremacist attack anywhere in the world can inspire a global base of white supremacist supporters. Examples of individuals whose attacks serve as violent inspiration to others include Anders Breivik in Norway, Brenton Tarrant in New Zealand, John Earnest in Poway, Robert Bowers in Pittsburgh and Stephan Balliet in Halle, Germany.

The following list of white supremacist groups, all of which have international ties, includes several that embrace the most extreme expressions of white supremacist ideology—specifically accelerationism, which is rooted in the belief that the “system,” infected with what they perceive to be deviant Jewish values, must be destroyed.  In their view, direct action against the system will hasten this collapse by creating societal chaos and leading to a (much desired) “race war,” a battle against what they perceive as the cultural and racial displacement of the white race. Note: This list reflects events/travel from 2018 to present.

Atomwaffen Division (AWD) is a small neo-Nazi group that emerged in the United States in 2016. The group is believed to have originated online, out of a now-defunct neo-Nazi forum called Iron March, known for its extreme content and calls for violence. Atomwaffen members participate in “hate camp” hiking excursions and military-style training exercises to prepare for a race war. Members and associates have been linked to a range of violent crimes, including murder, as well as alleged plots to attack civilians, nuclear facilities and synagogues.

Feuerkrieg Division (FKD) is a small international neo-Nazi group that advocates for race war; its views are among the most extreme in the white supremacist movement. Although FKD has European roots, the group has recently expanded outreach to include American audiences.  FKD was established in October 2018 in the Baltics, most likely Estonia. Over time, the group expanded its footprint to include Belgium, England, Ireland, Netherlands, Norway, Latvia, Western Germany and Russia. In 2019, FKD continued to expand their recruitment efforts in Europe and in North America, including Canada and especially the U.S.

The Hammerskin Nation, the best-organized neo-Nazi/racist skinhead group in the U.S., has chapters all over the world. A number of its members have been convicted of harassing, beating or murdering minorities. Many popular racist rock bands are affiliated with the Hammerskin Nation, and the group regularly sponsors concerts and music events.

Rise Above Movement (R.A.M.) is a white supremacist group based in Southern California whose members believe they are fighting against a “modern world” corrupted by the “destructive cultural influences” of liberals, Jews, Muslims and non-white immigrants. R.A.M. operates like a street-fighting club. Members train for physical battle with their ideological foes and have been involved in violent clashes during political rallies and demonstrations.

Sonnenkrieg Division (SKD), a white supremacist organization, launched online in 2018 and has strong ties to Atomwaffen Division.  SKD is predominantly focused on political and social issues in Europe, specifically the UK and Eastern Europe, and its members take a nihilistic view of the world, which they seek to destroy.  There is significant overlap in SKD and AWD's core ideologies, as well as the groups’ use of graphics and imagery, rhetoric, cross-promotion and communication.  Like Atomwaffen, Sonnenkrieg rails against a perceived cultural and racial obliteration of the white race and glorifies the teachings of Siege author James Mason. On one social networking platform they identify themselves as “radical, fanatical, ascetical.”

The Base is a small militant neo-Nazi organization that embraces Hitlerian ideology coupled with a mission to prepare for an impending race war. The group seeks to establish a nationwide network of people who believe in the use of violence to overthrow the existing social and political order. The Base claims an international operation, with cells and activity in the U.S. and worldwide, including locations in Australia, Canada and South Africa. As of March 2020, most of their on-the-ground activity has occurred in the U.S. and Canada.

Hate Beyond Borders: The Internationalization of White Supremacy