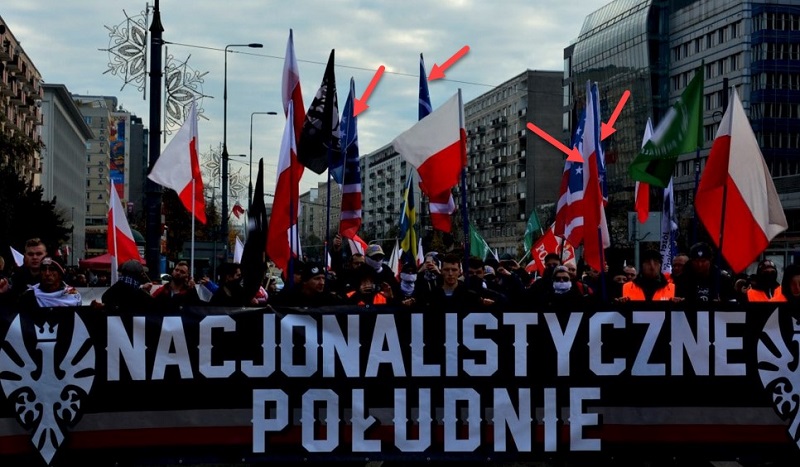 Hate Beyond Borders: The Internationalization of White Supremacy

The November 11 Independence Day March in Warsaw, Poland, attracted tens of thousands of participants, including a number of far-right individuals and groups, as well as white supremacists from Europe and the U.S. This is a clear example of the increasingly international reach of white supremacist ideology.

The annual event is organized by two groups that take their names, symbolism and ideology directly from Polish nationalist, anti-Semitic groups active in the 1930s: The National-Radical Camp (Oboz Narodowo-Radykalny, ONR) and the All-Polish Youth (Mlodziez Wszechpolska, MW).  After the first march in 2012, they formed a political party, Ruch Narodowy (National Movement), which has five members in the 460-seat national parliament, the Sejm.

Although a wide range of Poles attend the march each year, the event is known for its strident nationalism.  White supremacist banners, expressions of anti-Semitism, and anti-Muslim and anti-LGBTQ+ sentiment have been witnessed in past years. The symbol of this year’s march was a raised fist clutching a rosary.  March organizers said the symbol was meant as a Catholic rebuke to LGBTQ+ individuals and their rights. This is part of a larger effort to attract broader support for far-right nationalism in Poland by focusing on and exploiting issues with more mainstream appeal, like opposing LGBTQ+ rights and speaking out against restitution of Jewish property stolen during World War II.

The Polish national government, which has participated in the march in recent years, chose not to take part in the 2019 event.

American groups and individuals who attended the march, according to their own social media accounts: 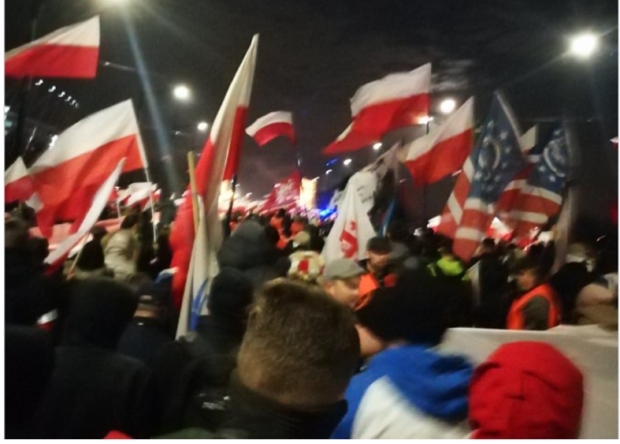 Patriot Front: This Texas-based white supremacist group, led by Thomas Ryan Rousseau, split from Vanguard America (VA) in late August 2017, not long after the Unite the Right white supremacist event in Charlottesville.  James Field, a white supremacist who was convicted of killing Charlottesville counter-protester Heather Heyer, was associated with Vanguard America. In addition to documenting the group’s presence at the march in Poland, Patriot Front’s Twitter feed also showed members traveling to Italy to meet with members of the far-right Italian group, Casa Pound. 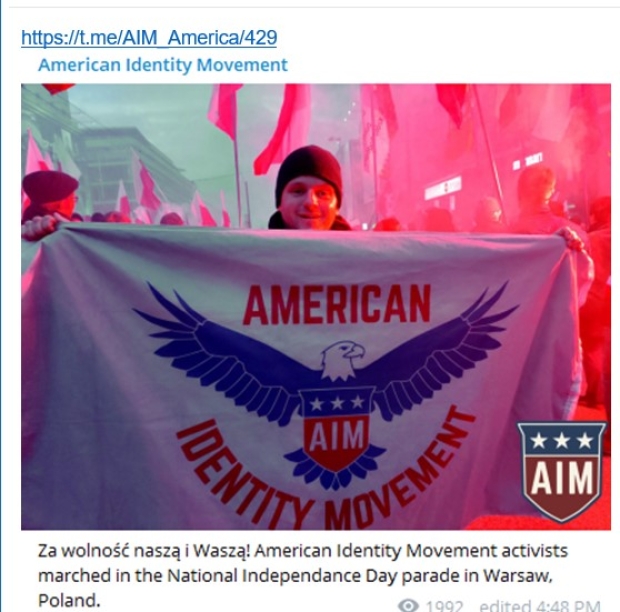 American Identity Movement: This white supremacist group, led by Patrick Casey, has members all over the U.S. The group, formerly known as Identity Evropa, has led an aggressive propaganda campaign to recruit college students, while attempting to present itself as a mainstream conservative organization that promotes European-American identity.

Paul Cameron: This discredited American psychologist and anti-LGBT activist is known for promoting anti-LGBT propaganda via —the Colorado-based Family Research Institute, which he founded.  According to a news report, Cameron spoke at the Warsaw march, telling attendees, “Brave Poles saved Europe from Islam, now they will save from the deadly LGBT invasion.”

Jack Posobiec: The conspiracy theorist and author, who tweeted a photo of himself holding a baby, apparently in the midst of the Warsaw march, has enthusiastically promoted a range of lies, including the Pizzagate hoax. He frequently tweets anti-Muslim sentiments and has harassed former Hillary Clinton aide Huma Abedin with anti-Muslim slurs online and in person.  Posobiec was among the protesters who stormed the stage during New York Public Theater’s controversial run of “Julius Caesar,” shouting, “You are all Goebbels! You are all Nazis like Joseph Goebbels... you are inciting terrorists," and, “The blood of Steve Scalise is on your hands!” Posobiec currently works as a correspondent for One News Network, a right-wing news network and site.

In addition to these American groups and individuals, international far right attendees included Paul Joseph Watson, a British conspiracy theorist who worked as a correspondent for Alex Jones’s conspiracy-driven InfoWars; Carl Benjamin, aka Sargon of Akkad, an alt right figure who, with Watson, joined the far-right, anti-Muslim UKIP party in the UK this past spring as a ploy by UKIP’s leaders to capture the youth vote; and Peter Sweden, a far-right influencer and self-styled journalist who publishes racist, homophobic, Islamophobic, anti-feminist and conspiracist commentary and content on Twitter and YouTube.