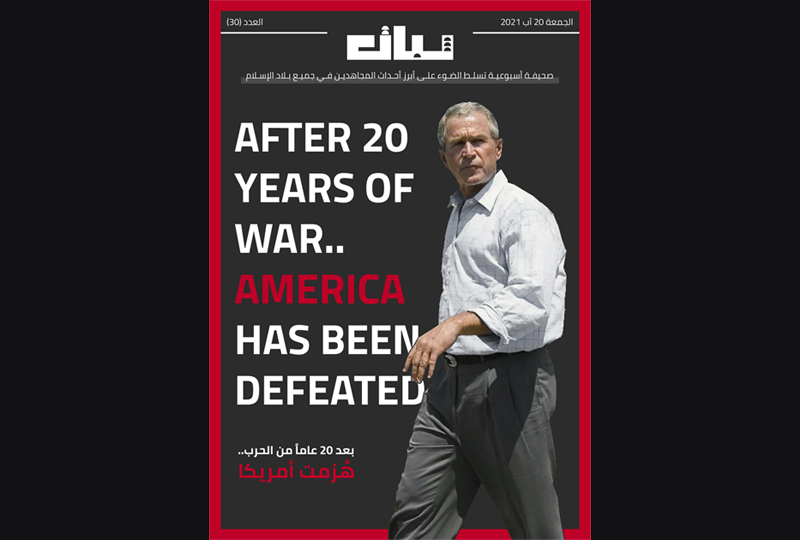 Thabat News Agency, an Al Qaeda-linked weekly publication, mocks Time Magazine's December 2001 cover which proclaimed that 2001 was "the last days of the Taliban."

Days after the U.S. troops began withdrawing from Afghanistan, the resurgent Taliban claimed territory in provinces across the country. Hundreds of provincial governors surrendered without a fight after the Taliban assured them that they would not execute leaders in areas where they encountered no resistance.

On August 15, the Taliban officially took control of Afghanistan’s capital city of Kabul and Afghan president Ashraf Ghani resigned his position and fled the country, clearing the way for the Taliban to take control of the government and reestablish the Islamic Emirate of Afghanistan. Observers in Afghanistan and the West were shocked by the speed with which the Taliban took over the country, and the U.S. was unprepared to evacuate its remaining citizens, leading to chaos and violence as people fought for limited space on departing aircraft. On August 26, terrorists from the Islamic State Khorasan Province (ISKP) executed a complex, coordinated attack against the Hamid Karzai International Airport, which included a suicide bomber and gunfire and left at least 183 people dead, including 13 U.S. service members and many more Afghan civilians. U.S. intelligence agencies had predicted such an attack was likely, but the chaotic situation at the airport seems to have precluded any effective countermeasures.

This is not the first time the Taliban have ruled Afghanistan. From 1996 through 2001, the group controlled around three quarters of the country after seizing territory during the Afghan civil war. The Taliban’s rule was characterized by violence, the persecution of ethnic and religious minorities, the elimination of women’s rights and education, and extensive support for Al Qaeda -- which gave Al Qaeda cover to plan the September 11, 2001, attacks. While some observers have expressed hope that today’s Taliban may be different, the recent behavior of the group suggests otherwise. Meanwhile, dozens of terrorist groups have expressed jubilation at the Taliban victory, anticipating that it will provide greater support and opportunities for other extremists.

The takeover of Afghanistan is not only a monumental victory for the Taliban, but also for Al Qaeda and its affiliated terrorist organizations. Al Qaeda pledged allegiance to the Taliban for its creation of the Islamic Emirate from 1996 to 2001 and in 2016 even nominally proclaimed the Taliban’s leader, Mawlawi Akhundzada, as the Emir al Mu’minin (Commander of the Faithful), a religious term used to refer to the leader of the international Muslim community, although in practice he wields little influence over Al Qaeda or militant forces outside of Afghanistan. Now, Al Qaeda and its affiliate groups have expressed support for the Taliban victory and excitement about what its rule will mean for their operations. The victory will likely have direct benefits for Levantine Al Qaeda groups; its affiliate, Huras al-Din, has been struggling to gain a foothold in Syria, but the group’s leadership could direct fighters to Afghanistan for training and resources to revitalize the group.

Al Qaeda has released a statement congratulating the Taliban on its victory, and it will likely also coordinate media releases from its other branches, though it is lagging behind other terrorist groups in its media operations. Another possibility is that Al Qaeda is intentionally keeping a low profile to avoid drawing attention to its connection to the Taliban. Although the Taliban has claimed that it will not allow terrorist groups to coordinate or launch attacks from its territory, both its past affiliation with groups like Al Qaeda and the current exuberance from terrorist groups means that it is highly unlikely that the Taliban will adhere to this commitment. Western analysts believe the Taliban will initially downplay its association with terrorist groups, and later on scale up to overt support for groups like Al Qaeda.

On August 16, Syrian terrorist group Hayat Tahrir al Sham released a poem on Telegram from one of its religious leaders, Dr. Mazhar al Ways, entitled “I Love the Taliban.” Both Hamas and Palestinian Islamic Jihad have also welcomed the news of the takeover. As of August 23, terrorist groups had released at least 18 publications celebrating the success of the Taliban. That number will likely continue to rise; Al Qaeda’s media body has not yet released an official statement from leadership, nor has it coordinated a response from among the group's affiliates. Regardless, the wave of congratulatory messages incoming from the terrorist community demonstrates that the Taliban’s success is seen as a success for Islamist extremists around the world.

ISIS, meanwhile, is also vying for influence in Afghanistan—beyond the bombings at the Kabul airport, they have also claimed several minor operations on August 14 and 15 from the Islamic State Khorasan Province (ISKP). While some ISKP fighters think that the Taliban will provide more opportunities for ISIS growth and operations, others complain that it is a victory for the West. Al Naba, ISIS’s weekly official newsletter, published an editorial which established the group’s talking points for the takeover. The editorial claimed that the Taliban victory was part of a conspiracy with the U.S., citing the speed with which towns fell to the Taliban, the fact that the Taliban has thus far allowed Americans to evacuate the country without interference, and the group’s failure to immediately enforce a punitive, extreme version of Sharia law as evidence of a U.S.-Taliban conspiracy. This narrative is essential for ISIS’s media strategy, because ISIS’s claim that it is the only group working to create a caliphate is belied by the Taliban’s success in establishing an Islamic Emirate. Therefore, ISIS will likely continue to try to undermine the Taliban’s success.

While the eyes of the world are on the Taliban, the group has put forward an ostensibly more moderate plan for governance, claiming that women will retain the freedom to receive an education and to work, that it will not seek retribution against Afghans who worked in the government or with U.S. forces and that it will not support Al Qaeda or allow attacks to be launched from Afghanistan. However, especially in light of the group’s long history of attacks against Aghan civilians and other rights abuses, it seems extremely unlikely that the Taliban will adhere to these commitments once the international attention has waned. Already, there are reports of Taliban fighters setting up checkpoints to hunt down Afghans who worked with the U.S. or NATO forces and threatening to kill their families if they do not turn themselves in. There have also been several instances of Taliban officials turning women away from their jobs. Taliban spokesmen have also confirmed that they will implement their extreme interpretation of Sharia law, rejecting any suggestion that they might retain a democratic system, and establishing that women must be veiled in public, and refusing to guarantee that women’s rights will not be diminished.

Twitter, unlike Facebook, still allows Taliban accounts on the platform. And the Taliban has taken full advantage of this messaging opportunity, live-tweeting their takeover of Kabul, a move that is likely to encourage engagement from other prominent extremist figures. The tactic has had some success; the Grand Mufti of Oman, who has a reputation for commenting outside of his government’s official channels, retweeted several of the updates and even published his own statement congratulating a victory for “the Afghani Muslim brothers.”

China and Russia have both already indicated that they are willing to work with the Taliban. The U.S. and EU, however, remain opposed to acknowledging the Taliban’s rule.

The human cost of the Taliban’s most recent takeover of Afghanistan is already massive. Early reports of women being forced out of their workplaces, reprisals against Afghans who worked with US and NATO forces and violence by Taliban fighters indicates that the reality of the Taliban regime will be far from moderate. Although the Taliban have not immediately implemented their extreme version of Sharia law across all of Afghanistan, they are very likely to do so in the future.

The combined effect of Taliban control and the U.S. withdrawal also has serious counterterrorism ramifications: without a presence in the country, U.S. intelligence agencies will have dramatically reduced visibility into the activities of any terrorist groups in Afghanistan.