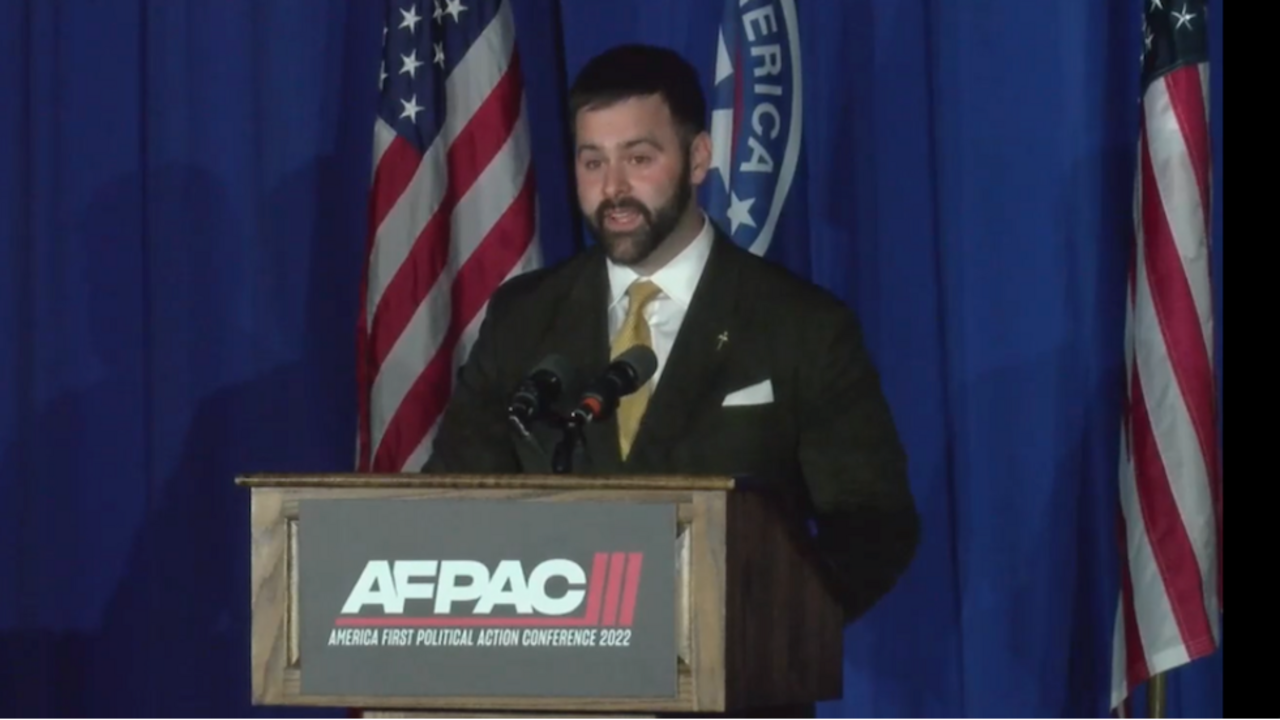 Torba speaking at AFPAC III in 2022

1. Torba is the founder and CEO of Gab, a social media platform and haven for hate and disinformation

Andrew Torba is the founder and CEO of Gab, an online hub for extremist and conspiratorial content. Since Gab’s inception in 2016, Torba has positioned the platform as a “free speech” alternative to Twitter and other popular social media websites. Because of the platform’s lax policies around content moderation, Gab quickly became known as a platform used by conspiracy theorists, white nationalists, neo-Nazis, members of militias and influential figures among the alt right.

The platform also has welcomed extremist and other problematic content, including verified accounts that share posts praising National Socialism, posts espousing QAnon conspiracy theories and hateful posts towards marginalized groups such as minorities, immigrants and members of the LGBTQ+ community. ADL’s Center on Extremism (COE) has also found examples of extremist and harmful content, including the antisemitic and anti-immigrant rants Robert Bowers posted prior to his 2018 mass shooting at the Tree of Life Synagogue, in which he killed 11 people.

Conspiracy theories and antisemitism are rife on Gab, including misinformation about COVID-19 and the 2020 Presidential election as well as comments suggesting Jewish people control financial institutions like the U.S. Federal Reserve and have orchestrated violent global events such as the Russian revolution.

A number of online services have removed Gab based on concerns about content. In the days following the Tree of Life massacre, Gab was banned from using the blog posting site Medium, hosting provider Joyent, website domain provider GoDaddy and the payment providers Stripe and PayPal. When asked why they pulled their support, PayPal stated that Gab was “explicitly allowing the perpetuation of hate, violence, or discriminatory tolerance.” Meanwhile, Torba has continued to build and expand the platform.

Torba himself espouses much of the same hateful and extremist rhetoric that his platform is known for. In November 2022, he made an antisemitic post on Telegram, using a verified Gab account, saying the GOP needed to be destroyed before another “Zionist bootlicker” was voted into office (note: ADL can say with high confidence that the verified Gab telegram channel is run by Torba as he has written in the first person there numerous times.)

In the same month he also wrote an antisemitic article on news.gab.com which targeted the ADL and Elon Musk’s Twitter content moderation policies. He wrote:

Also in November, Torba reposted a claim that the Jews are responsible for societal decay and are “psychologically and spiritually castrating” citizens.

COE has highlighted past examples of Torba’s antisemitism here.

Torba has also nodded to right-wing extremist ideologies such as accelerationism. In April 2021, in a response to general discourse discussing political elections, Torba commented, “Dems win either way. Accelerate the decline so we can start rebuilding from the ashes.” Torba’s overall message mirrors accelerationism, a term used by white supremacists that expresses their desire to intensify societal conflicts and collapse.

While Torba differs from accelerationists in that he does not emphasize that this rebuilt society should be exclusively for white people, he has shared other conspiracy theories that are heavily promoted by white supremacists such as “The Great Replacement” theory. This theory suggests that people of color are “replacing” white people through immigration, birth rates and other economic, social and political means. Some versions of the conspiracy theory allege that Jewish people are orchestrating this “Great Replacement” in order to weaken white culture and values. In 2021, Torba posted on his personal Gab account that he supported Tucker Carlson and his promotion of the replacement theory, writing, “Now today the ADL is trying to cancel Tucker Carlson for daring to speak the truth about the reality of demographic replacement that is absolutely and unequivocally going on in The West. These are not ‘hateful’ statements, they [sic] objective facts that can no longer be ignored.”

Torba has also frequently posted content in support of the January 6th insurrection as an acceptable response to political grievances, namely that the 2020 U.S. Presidential election was rigged in favor of President Biden. In an open letter to the U.S. Department of Justice, COE highlighted that Torba sent a message to “Gab News” subscribers prior to the January 6th Insurrection, saying: “If you are heading to DC tomorrow remember to record video footage in landscape mode while filming. Document as much as you can and please know that your content is safe on Gab and Gab TV. Big Tech will undoubtably [sic] be censoring any and all footage to downplay the massive turnout and hide any communist violence that arises.” Torba also posted on the day of the attack, “In a system with rigged elections there are no longer any viable political solutions,” and, “would be a real shame if the people outside stormed the Senate.”

Torba also shares COVID-19 and election misinformation, going so far as to publish an article on Gab with instructions on how to create a religious exemption document to prevent Gab users from “getting injected with a potentially deadly experimental substance.” Regarding election misinformation, Torba has shared conspiracy theories regarding the 2020 U.S. Presidential election and encouraged Gab users to share this misinformation with their peers and families. In a recent article, Torba claims that if more people were on Gab, then they “would know much more about the rigged and stolen 2020 election. They would know about the January 6th hoax and see the video footage of Capitol police literally opening the doors and allowing the crowd into the Capitol. They would know about the Great replacement and who is doing it.”

3. Torba has long promoted the concept of Christian nationalism, encouraging his followers to help build an independent “Christian” economy

While Torba only recently began using the specific phrase “Christian nationalism,” he has long argued that Christians should be building a “parallel Christian economy” and distancing themselves from mainstream institutions, creating their own social media platforms, banks and other resources. Using his influence as Gab’s founder and CEO, Torba regularly publishes content that underscores this message.

An article published by Torba highlighting his parallel economy

In February 2021, Torba published an article asserting that the only way to push back against “globalism” and the “corruption” of public and private institutions is to leave the current system and build new infrastructures founded on Torba’s concept of Christianity.

On August 23, 2021, in response to the Taliban’s takeover of Afghanistan, Torba wrote on Gab, “If a bunch of dudes who hid in caves for twenty years can take their country back from the Globalist American Empire then there’s no reason we can’t too. All we have to do is exit their system and build our own.”

4. Torba has allied himself with extremists and far-right influencers

On February 25, 2022, Torba was a guest speaker at an annual event founded by white supremacist Nick Fuentes. The America First Political Action Conference (AFPAC III) consistently brings over 1,000 attendees, with thousands of viewers watching the conference live on Fuentes’ Cozy.tv streaming platform. Torba’s speech highlighted his Christian nationalist beliefs; he said, “America is a Christian nation” and encouraged the audience to act to protect the country’s “religious integrity.”

This is not the first time Torba has collaborated with Fuentes. The two platform founders appear to view each other as integral to creating an alternative technology ecosystem that allows online users to share their content without fear of being banned. Fuentes, who is active on Gab, has highlighted his admiration for Torba, saying, “I trust Gab because Gab is run by a faithful Christian. And not some Judeo-Christian either, a Christian.” Likewise, Torba is active on Fuentes’ livestreaming platform, where he is a verified content creator.

Torba has both interviewed and been interviewed by several other extremists, conspiracy theorists and far-right influencers.

Conspiracy theorist Alex Jones has praised Torba for his work. In a 2021 interview between Jones and Torba, Jones tells his audience that “we should all rally behind Gab, we should empower [Torba].”

In 2021, the far-right conspiracy theorist Stew Peters interviewed Torba and praised Gab, sharing that he believes Gab is “going to be the Alamo of free speech.” Peters also appeared at Fuentes’ AFPAC III, where he highlighted that America’s enemy is “Satan himself,” who is “flooding our schools with blood libel against white people” and allowing an “Islamic insurgency.”

In June 2020, Torba was interviewed by Peter Brimelow  the founder of the racist and conspiratorial website VDare, during which Torba claimed that hate speech “does not exist.”

Finally, Torba has been interviewed multiple times by the far-right influencer Steve Bannon on his online show “Bannon’s War Room.” During these interviews, Torba shares his beliefs on election conspiracies and transhumanism, a conspiracy theory that governments are modifying bodies and DNA via secretly inserted chips. 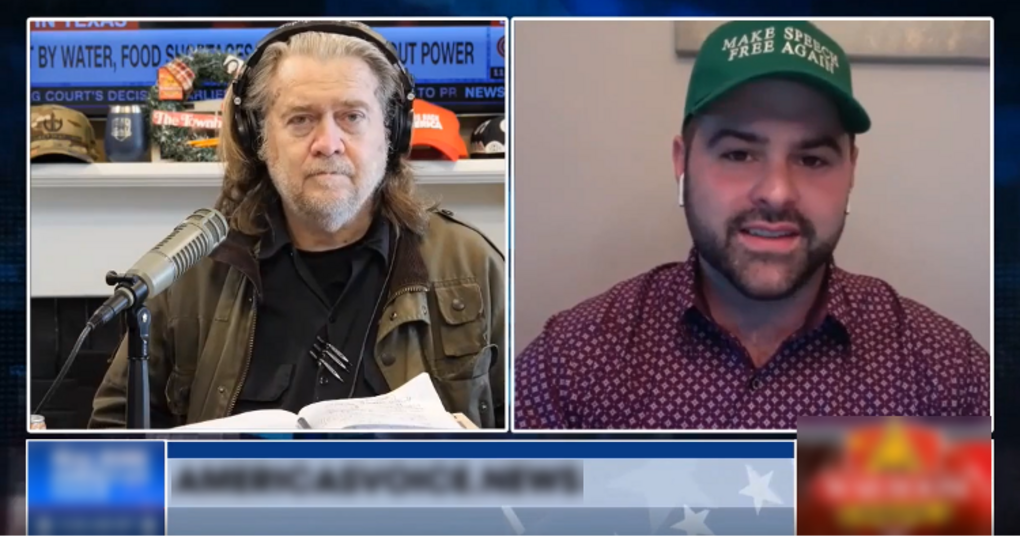 5. Over the last two years, Torba has worked to insert Gab, himself and Christian nationalism into mainstream society and politics, primarily through relationships with elected officials and candidates

According to Torba, the Gab founder’s public affiliation with Pennsylvania gubernatorial candidate Doug Mastriano began in May 2022, when Torba officially announced that Gab would be endorsing Mastriano and PA Senate candidate Kathy Barnette. Torba claimed that this announcement was a culmination of the work he has done over the past year in order to build “a coalition of Christian nationalists at the local and state levels.”

Torba routinely promotes U.S. elected politicians who create accounts on his platform. In early 2022, Torba shared that more than 50 US officials had already created Gab accounts, including figures such as Paul Gosar, Marjorie Taylor-Greene, Lauren Boebert, Matt Gaetz and Wendy Rogers. These elected officials have all either been connected to other extremist movements, involved in spreading election conspiracies and COVID-19 misinformation or, in the case of Gosar, promoted violence against political opponents. Torba has repeatedly described these individuals, among other politicians, as being part of the “Gab Caucus,” with several of these officials continuing to share misinformation and rhetoric on the platform.

Torba has acknowledged that these connections are part of a concerted effort to shift the “Overton Window” – or what is considered “acceptable” in politics and society – towards a broad embrace of Christian nationalism. In 2022, Torba wrote that he measures success by “how well we are influencing the influencer,” noting that multiple members of Congress are now publicly embracing Christian nationalism, and that phrases and ideologies like the Great Replacement that were previously considered extreme are now part of nominally mainstream television shows and political conversations.

Below are recent comments Torba has made on Gab about his belief that the Christian nationalist movement will soon take over the U.S political system.

July 28, 2022: “8 of out 10 Republican voters are Christians. This is our party and we’re reclaiming it in the name of Jesus Christ. There is absolutely nothing the GOP Establishment can do to stop us.”

June 3, 2022: “To all the journos who stalk my profile: Yes, we are Christian nationalists. Yes, we are taking over the Republican party—and the country. Yes, we are indoctrinating the next generation to follow in our footsteps. All for the glory of God. We can’t be stopped. Enjoy the show.”

June 3, 2022: “Only took about a year for us to mainstream Christian Nationalism and make it a central talking point by the mass media and elected members of Congress. We are only just getting started too, all the glory goes to Christ the King!”

As a 501(c)(3) nonprofit organization, ADL takes no position is support of or in opposition to any candidate for political office