Anti-Israel activism at the March 2020 AIPAC conference was tainted by antisemitism when disparate groups from across the ideological spectrum held protests outside the annual meeting.

The most prominent organization present was the extreme anti-Israel activist group Al Awda, which has a history of promoting antisemitism and expressing support for terrorism. Al Awda collaborated with the fringe anti-Zionist ultra-Orthodox Jewish group Neturei Karta.

Meanwhile, members of the antisemitic Westboro Baptist Church held a separate protest. At least two white supremacists who promoted Holocaust denial and raw anti-Semitism also circulated outside. These groups, who hold dramatically different ideologies, are united in their antipathy for Israel and Zionism.

Al Awda, which convened the main rally, was founded by Abbas Hamideh, who has praised terrorist groups including Hamas and Hezbollah. Approximately 30 people participated in the protest, chanting anti-Israel slogans and holding anti-Israel signs. Some language at the Al Awda rally included anti-Israel and antisemitic rhetoric.  In one instance, a protestor repeatedly shouted, “Death to Israel.” In another instance a demonstrator yelled, “Remember the Holocausts [sic]. The Holocausts [sic] will come back to you…you’re gonna get burned if you don’t give us the land…Hitler will come back.” These threats were shouted within hearing range of conference attendees.

Eric Resnick, a member of Jewish Voice for Peace from Canton, Ohio, expressed the following antisemitic sentiments: "Zionists are liars….and there are 20,000 Zionist liars right now in that convention center at that AIPAC conference, who are standing up for ethnic cleansing, who are standing up for the death, the dispossession, and the dehumanization of Palestinians….

"AIPAC is a terrorist organization. AIPAC commits war crimes…AIPAC has been meddling in U.S. elections since the 1950s.... They’ve got a lot of money. They can’t do what they do if they weren’t throwing around a lot of money to buy that building [the White House] and the domed building down the street [Congress]…"

"When those people say ‘Never again,’ they don’t mean ‘never again’ to anyone, anywhere else. They just mean ‘never again” to Jews. And they also mean that Jews can be as mean, and as nasty, and commit as many crimes as they want to because they were victims once….Zionists aren’t real Jews."

Most of the other chants at the Al Awda rally were tamer. Some protestors yelled, “End the occupation now,” “Stop Israeli terrorism now,” “End AIPAC now” and “From the river to the sea, Palestine will be free.”

Far-right activists and white supremacists were responsible for the most glaring and straightforward instances of antisemitism at the anti-AIPAC protests. In one case, a white supremacist alternately held various antisemitic signs which denied the Holocaust, claimed that Israel perpetrated the 9/11 attacks and alleged that Zionists control the media. The white supremacists posted video of themselves harassing AIPAC attendees and members of the Al Awda protest. One accused Jews of wanting “white genocide.” He continued by saying Jews should leave the U.S., adding,  “You guys gave up the Torah which was never yours to begin with in replace [sic] for your new religion, the Holocaust.” He also asked, “Are you guys the dumbest Jews in the world?” when the crowd around him dismissed his claim that Presidents Obama and Trump are both Jewish. Several feet away, a second white supremacist protestor told an interviewer that “The Jewish leaders do control America; they’re in most of the positions of power; they control the media, first and foremost, and the internet and that allows them to disseminate their propaganda and they use it to blame white people for what America does.”

In the days leading up to the AIPAC conference, anti-Israel activists promoted their belief that AIPAC provides a platform for bigotry and helps to repress Palestinians’ human rights. The U.S. Campaign for Palestinian Rights, which serves as the American arm of the anti-Israel Boycott, Divestment and Sanctions movement, registered its disapproval of AIPAC, tweeting: “AIPAC is on Capitol Hill this week for its annual pro-apartheid, pro-racism, pro-segregation, anti-Palestinian rights lobby day.” The pro-BDS, anti-Israel group Jewish Voice for Peace (JVP), tweeted that the AIPAC conference is “a celebration of the Israeli government’s oppression of Palestinians. It isn’t about Jews or Judaism, it’s about hate.”

Vocal Israel critic and former AIPAC employee MJ Rosenberg echoed the antisemitic trope that Jews or Zionists control the U.S. government, tweeting: “Amazing. #AIPAC2020 is pulling in all these presidents & PMs from all sorts of places. They figure #Israel lobby is so powerful that being friends with #AIPAC will influence Trump relations with them. It’s true. They own U.S. policy.”

The vociferously anti-Israel news website Mondoweiss posted a cartoon by antisemitic cartoonist Carlos Latuff, who won second place in a 2006 Iranian contest for the “best” cartoon belittling or denying the Holocaust.  Latuff’s 2020 cartoon depicts the U. S. working on behalf of Israel as a security officer for the “AiPAC [sic] hate fest:” 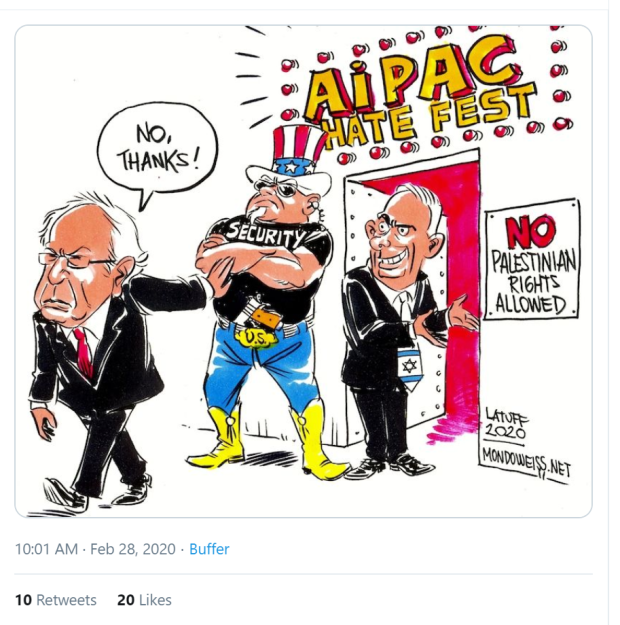 Other expressions of opposition to AIPAC were overtly antisemitic. In a March 2nd Facebook post, extreme anti-Israel activist Mazin Qumsiyeh effectively claimed that Zionists inside the Democratic and Republican parties control both the media and foreign policy: “Many Zionists are deep within the Democratic and Republican parties and ensure mainstream media trashes those Americans interested in a US foreign policy that helps the US not helps racist Zionist billionairs [sic] like Edelson [sic] and Bloomberg.”

In the same post, Qumsiyeh goes beyond the antisemitic charge of “dual loyalty” against Jewish Americans, which accuses them of not being sufficiently loyal to the U.S. and instead being loyal to Israel. Referring to AIPAC activists, Qumsiyeh continued: “It is not ‘dual loyalty’ – these racists have one loyalty to Zionism. Many are already agents or helpers of the Israeli Mossad which steels [sic] US government and corporate secrets and spies even on high level US administration [sic].”