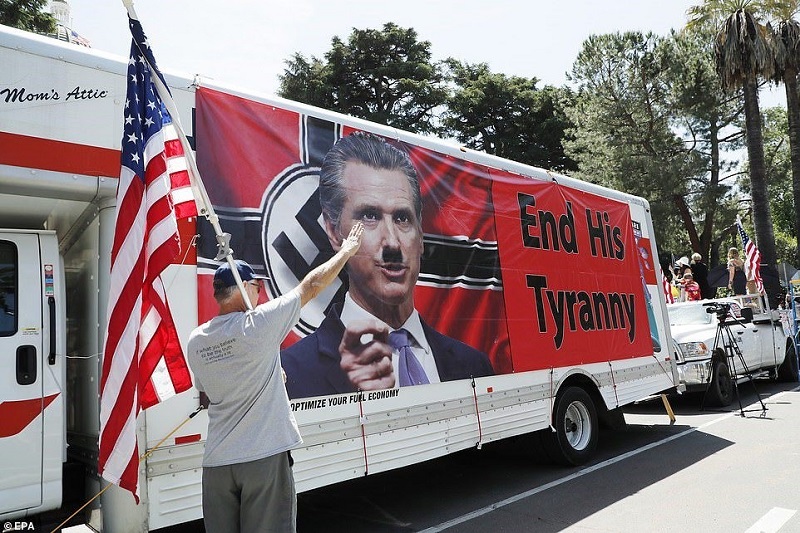 At nationwide rallies against policies aimed at curbing the spread of COVID-19, highly visible protesters are comparing government officials to Nazis and their policies to the Nazi persecution of Jews during World War II.

The tactic of employing Nazi- and Holocaust-related analogies is not new -- it has been used by protesters and pundits for decades. But these analogies, laden as they are with allusions to unqualified evil, tyranny and persecution, continue to provoke outrage.  Often paired with graphic symbols associated with the Nazi regime, including swastikas or caricatures of Hitler, the ploy never fails to shock onlookers, intimidate targets, and, perhaps most importantly, attract media attention.

The use of Nazi and Holocaust analogies is offensive, even traumatizing, especially to the families of Jews who perished and to those who lost loved ones fighting the Nazis in  World War II.

As a general rule, ADL condemns the use of Nazi and Holocaust analogies in debates over contemporary issues, including in the context of political protests like the anti-lockdown rallies.  ADL has also been critical of the use of Holocaust analogies by elected officials, as we have seen recently in Alaska, New Mexico, Ohio and Pennsylvania, among others.

Probably the most common type of Nazi analogy at these protests is the comparison of government officials to Hitler. This parallel has been drawn against governors in Michigan, California, and Illinois. These types of comparisons are widely and deeply offensive, but are not generally antisemitic. 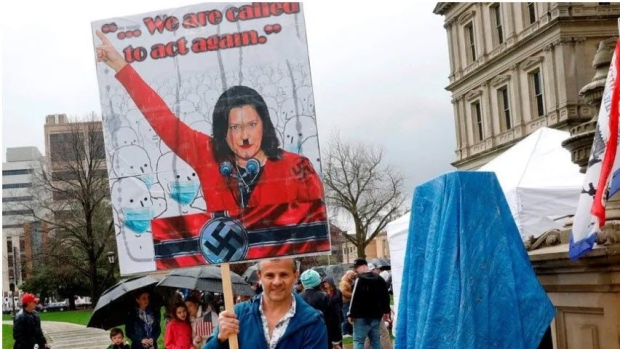 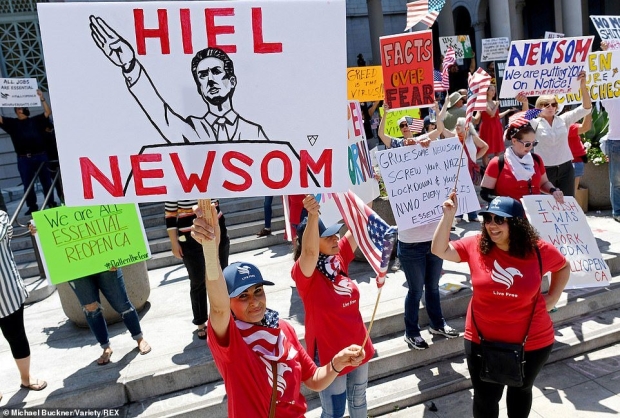 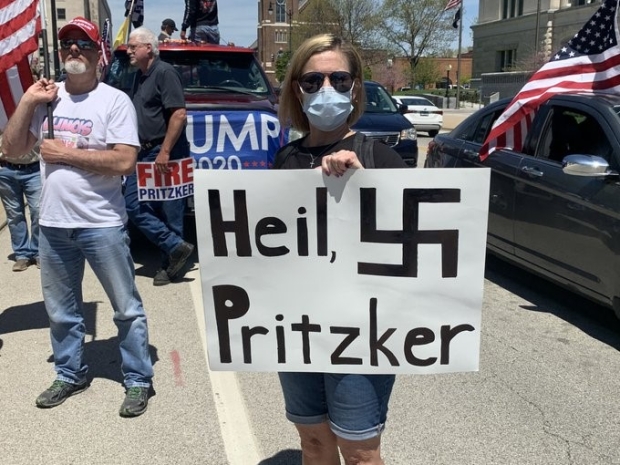 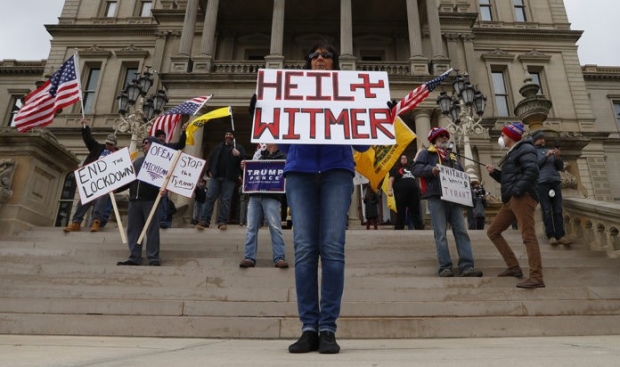 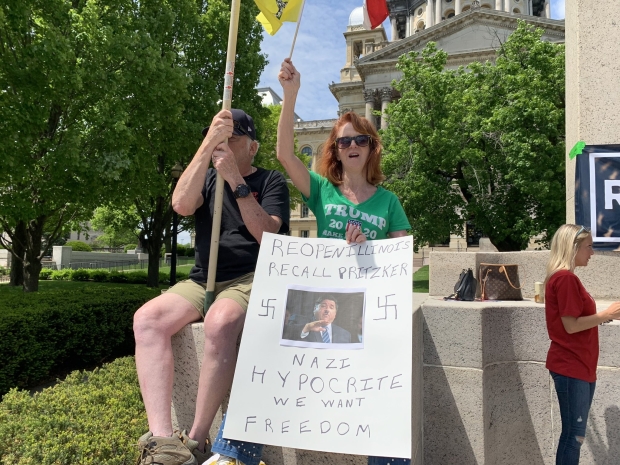 Some of the most offensive Holocaust analogies directly invoke the horrors of Auschwitz, the Nazis’ hybrid concentration and death camp where more than one million Jews and tens of thousands of others were killed between 1940 and 1945. The entry gates of the camp included the now-iconic sign, “Arbeit Macht Frei” (“Work sets you free”), which served as a hideously cynical message to doomed laborers. The use of this phrase during a political protest in Chicago, IL, on May 5, 2020, presumably referring to pandemic shelter-in-place requirements keeping employees from working, was an unconscionable desecration of Holocaust memory. Please note that reports of a similar sign being displayed at a protest in Pittsburgh were false. 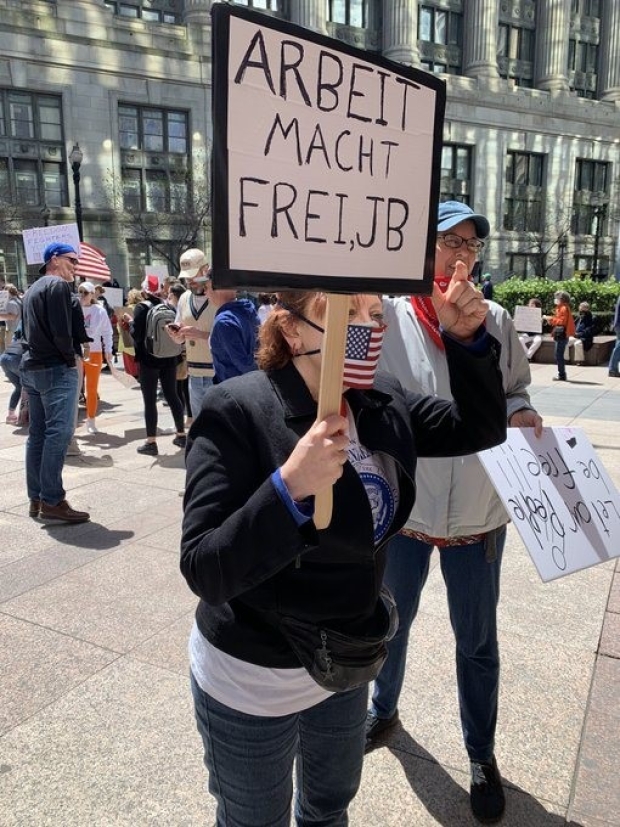 In another example of an obscene Holocaust analogy, a protestor in Huntington Beach, CA, carried a sign with this overt reference to gassing Jews and the Nazi effort to annihilate all Jewish life in the Third Reich. 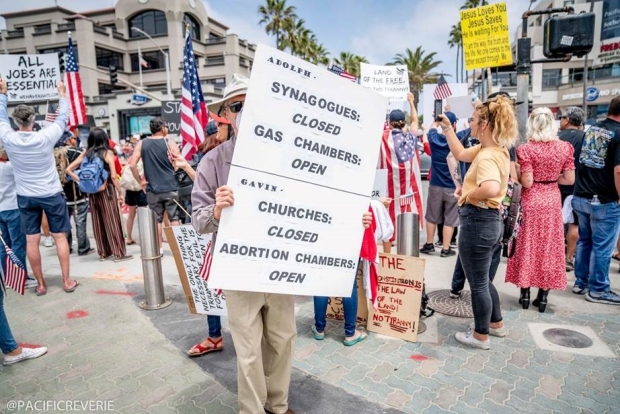