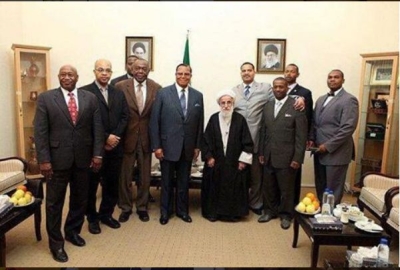 Nation of Islam (NOI) leader Louis Far­rakhan was provided with an opportunity to promote his typical anti-Semitic conspiracy theories last week in Iran.

Farrakhan was a “special guest” at multiple high-level events and met with current and former Iranian government officials including Grand Ayatollah Ahmad Jannati and former Foreign Minister Ali Akbar Velayati. Farrakhan was also reportedly the guest of honor at a ceremony unveiling a new drone, during which Iranian President Hassan Rouhani was present.

Farrakhan previously met with Rouhani at a 2013 event organized by the Iranian delegation on the sidelines of the United Nations General Assembly (UNGA) and visited Iran in 1996.

During a press conference after an event marking the 37th anniversary of the Iranian revolution, Farrakhan stated, “Whenever America wants to destroy a nation, a people, they must first demonize them, and the Zionist-controlled media in America has chosen to demonize Iran.” He added, “Not because Iran is a demon but the demon is the demonizer.”

According to the NOI’s Final Call newspaper, Farrakhan also claimed Jews conspire to divide Muslims. Farrakhan said, “I call [this group of Jews] the Synagogue of Satan…In the book of Revelations, it reads, those who say they are Jews and are not, I will make them of the Synagogue of Satan. And they are working day and night to destroy any unity among Muslims.” 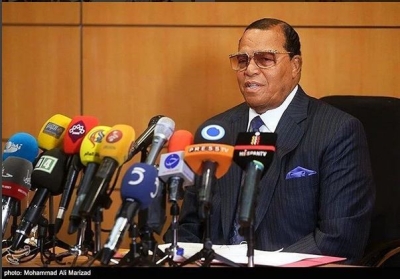 It is no surprise that Farrakhan would invoke anti-Semitism during what the NOI is referring to as “a special, historic pre-Saviours’ Day trip.” Saviours’ Day, which takes place February 18-21, is one of Farrakhan’s largest platforms for anti-Semitism.

During last year’s Saviours’ Day sermon (Part 2), Farrakhan stated, “It is now becoming apparent that there were many Israelis and Zionist Jews in key roles in the 9/11 attacks… It now appears that 9/11 was a false flag operation… We know that many Jews received a text message not to come to work on September 11.” He also claimed that Israel con­stantly acts against America’s inter­ests, but “they don’t fear Amer­ica because they con­trol it from within.”