For more information about this event, see:

Well-known anti-Semitic conspiracy theorist Christopher Bollyn is scheduled to speak at 7pm on Wednesday, September 7, at the Brooklyn Commons in Brooklyn, New York. News of the event prompted an outcry from clients and patrons of the popular event and co-working space.

Bollyn, who spent his summer on a nationwide speaking tour touting his belief that the 9/11 terror attacks were orchestrated by Israel and “the Jews,” was also slated to appear on September 9 at the West Park Presbyterian Church in Manhattan, but the church cancelled the event following an outcry from the community, citing the “inconsistency” of Bollyn’s message with their “mission and standards.” 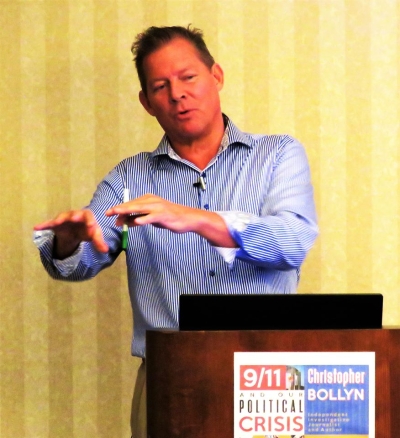 Bollyn’s website reflects a range of twisted theories, including well-worn anti-Semitic tropes – Jews control the media and the government, including all U.S. foreign policy – and a deep well of Holocaust denial. Bollyn is a former writer for the anti-Semitic conspiracy-oriented newspaper American Free Press and its predecessor, The Spotlight.  Both were published by the late anti-Semite and Holocaust denier Willis Carto.

But Bollyn’s current obsessions are 9/11 and the “War on Terror.”  In his 2012 book, “Solving 9/11: The Deception that Changed the World,” Bollyn writes, “The ‘false flag’ terrorism of 9/11 is a monstrous Jewish-Zionist crime of our time. The true culprits of this heinous crime are clearly being protected by a gang of like-minded Jewish Zionists in the highest positions of the U.S. government.” The resulting “War on Terror” and its attendant massive government expenditures, Bollyn contends, were the real goal of the 9/11 instigators.

Since Bollyn’s talk was scheduled, The Brooklyn Commons’ Facebook page has been bombarded with angry messages protesting Bollyn’s appearance and calls for a boycott. Melissa Ennen, founder of The Commons, responded to the uproar with a statement reiterating her support for free speech, and essentially urging protesters to attend the event in order to counter Bollyn’s message.

“This morning,” Ennen wrote on September 6, “some of the people who rent co-working spaces at The Commons issued a statement denouncing the Bollyn event, declaring that ‘such [antisemitic] [sic] politics should have no place in leftist spaces.’ I agree that all forms of racism should have no place in leftist spaces, but in my opinion, to get to the root of racist thinking, confrontation works better than censorship.”