On Thursday, March 24, a number of campuses around the country received an anti-Semitic flyer that blamed Jews for destroying the country “through mass immigration and degeneracy.” The flyer asks people to “join us in the struggle for global white supremacy.” While it’s unclear who actually sent the flyers to network printers and fax machines at the schools, it contained the address of The Daily Stormer, a neo-Nazi website. The distribution may be the result of a hacking effort.

The Daily Stormer openly embraces Hitler and National Socialism. Every day, the site posts virulently racist and anti-Semitic articles. Using crude language, the site disparages minorities and blames Jews for a number of societal ills. The site was created by Andrew Anglin, a 31-year-old neo-Nazi, in 2013. Anglin said that he started the site “to serve as a hardcore front for the conversion of masses of people into a pro-White, Antisemitic ideology.” 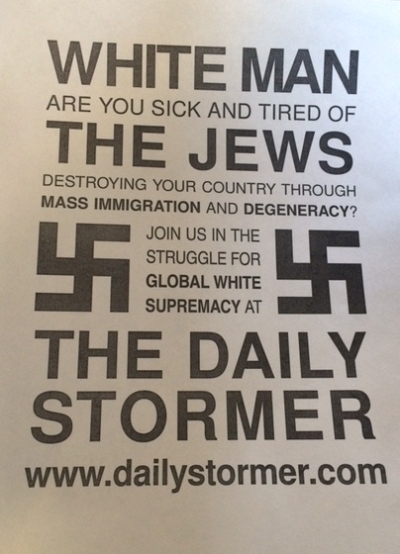 Anglin, based in Ohio, first got involved in the 9/11 “Truther Movement”, which promotes conspiracy theories about the 9/11 terrorist attacks. He created a site called “Total Fascism” in 2012 before focusing on the Daily Stormer. Anglin has declared that Jews are the “open and public destroyers of society” and that Jews are the enemy of the white race. In addition to demonizing Jews, Anglin is an ardent Holocaust denier, referring to the Holocaust as a “hoax.”

Anglin has been known to urge supporters to troll perceived enemies on Twitter. In November 2014, Anglin promoted a Twitter campaign to bombard Luciana Berger, a British Member of Parliament, with an anti-Semitic misogynist tweet. Anglin started his campaign against Berger after a British anti-Semite was arrested for sending her anti-Semitic messages through Twitter.

Regardless of whether Anglin or one of his supporters sent the flyer to campuses, the Daily Stormer promotes virulent anti-Semitism on a daily basis and attracts thousands of visitors each day to the site.