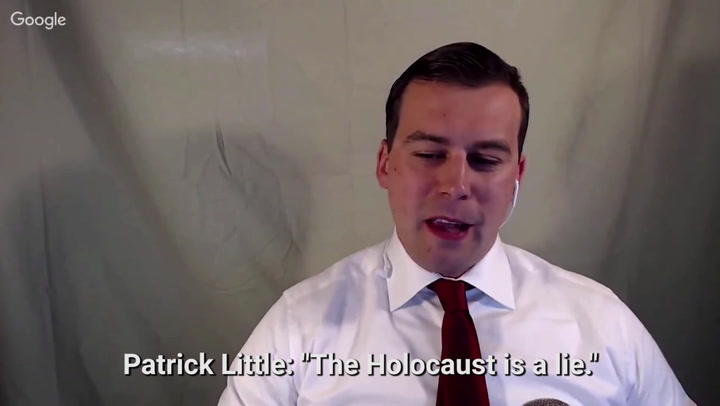 By Oren Segal | Director of the Center on Extremism

Little, an unabashed anti-Semite and racist who attended the Unite the Right rally in Charlottesville, Virginia, is polling at around 18%, well behind Feinstein in California’s party-blind June 5th primary. He is running as a Republican, despite having been publicly denounced by the state GOP.

The calls accuse Feinstein of being an Israeli citizen (a nod to a common anti-Semitic trope about Jewish “dual loyalty” to the U.S. and Israel) and promise listeners that Little will “rid America of the traitorous Jews.”

The first calls were reported in the media May 14, and the call volume spiked in the succeeding days. On May 15, The Road to Power took to Gab, a social media platform popular among white supremacists, to boast about the calls, which they claimed were delivered to more than 350,000 Californians. It’s not clear how many people in total have received the calls, or whether they are being sent to targeted recipients.

ADL has learned that staff at a range of California’s Jewish institutions have gotten the calls, including synagogues, ADL offices, Jewish Federations and Jewish schools.

Racist, anti-Semitic robocalls are not new; in 2016, white supremacist and American Freedom Party (AFP)  head William Johnson issued a call in which he urged primary voters to cast their ballots for Donald Trump, citing the impending “death” of the white race. In 2015, AFP issued similar calls, referencing “white genocide,” for the party’s presidential candidate, Bob Whitaker.

Little is far from the only anti-Semite running for national office this year. Major party candidates in Pennsylvania, Illinois and Wisconsin are spewing their racist, anti-Semitic, xenophobic bile in the most public forum imaginable.

Little maintains he has nothing to do with the calls, but refuses to disavow them.“Show me the lie, and I will consider renouncing it,” he told the San Francisco Chronicle. As the call frequency – and surrounding publicity – escalated, he reposted a supporter’s image on Gab.

Transcript of the call:

Woman: Wait, that can’t be legal, right? I mean she’s a citizen of Israel but she gets to vote as a U.S. senator from California to send billions of our dollars every year to her real country, Israel?

Man: It used to be illegal but the Jews of our country got rid of that law.

Woman: Not only that, but she gets to vote America into middle east wars based on lies so that Israel can eventually expand its borders like it always planned.

As a 501(c)(3) non-profit organization, the Anti-Defamation League neither supports nor opposes any political candidate for office.