Anti-Israel groups are exploiting current anti-Trump activism to bring attention to their cause.  Their strategy:  Drawing specious comparisons between the planned wall dividing the U.S. and Mexico and Israel’s security fence in the West Bank and Gaza. 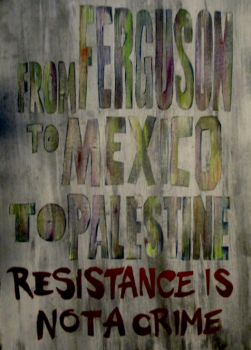 The comparisons are evident on social media platforms, including Facebook and Twitter, and were also on display during the recent protests at major airports across the country, where activists gathered to condemn the Trump administration’s ban on travelers from seven Muslim-majority countries. At Baltimore-Washington International, JFK, San Francisco International, Austin-Bergstrom International and Chicago-O’Hare, protesters chanted, “From Palestine to Mexico, all the walls have got to go.”

Thanks to the current political climate and ongoing heated discussions about immigration and border security, the comparison has become a newly effective tool, allowing certain groups to couch their hostility towards Israeli policies in social justice terms. It’s an attempt to appeal to a broader base of support, extending well beyond social media and airport terminals.

Recently, activists’ efforts to draw a link between the U.S./Mexico wall and the Israeli security fence were given a significant boost by President Trump and Prime Minister Netanyahu. President Trump has invoked Israel’s “wall” as a model for the wall he intends to build along the U.S. border with Mexico, telling Fox news, “All you have to do is ask Israel. They were having a total disaster coming across and they had a wall. It’s 99.9 percent stoppage.”

Prime-Minister Netanyahu bolstered the comparison when he tweeted: “President Trump is right. I built a wall along Israel’s southern border. It stopped all illegal immigration. Great success. Great idea.” Following the Prime-Minister’s tweet, the Israeli Foreign Ministry clarified that Netanyahu was only referring to the fence along Israel’s border with Egypt, which has been found to be effective at stopping illegal migrants from entering the country. Nevertheless, the tweet went viral on many social media platforms, thanks in large part to anti-Israel groups. It has been invoked on Facebook event invitations, including an Austin, Texas, event in February called “Israel: The Blueprint for Trump’s Policies.”

In fact, efforts to compare Trump’s Mexico wall proposal with Israel’s security barrier are flawed. Israel’s security barrier was built along the West Bank in response to a wave of suicide bombings and other attacks which were responsible for the deaths of hundreds of innocent Israelis. Following the barrier’s completion, suicide bombings in Israel from the West Bank decreased dramatically to close to zero. Trump’s wall proposal is largely rooted in economic concerns, and shares little in common with the security concerns behind Israel’s barrier. 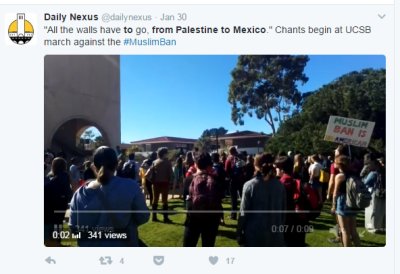 In late January, wall comparison chants could be heard on college campuses across the country, from the University of California Santa Barbara to Columbia University in New York. Activists shouted slogans, including the now-familiar “From Palestine to Mexico, all the walls have got to go,” at “No Ban No Wall” and “Resist Trump” protests, where speakers condemned the Trump administration’s “Muslim ban.”

Thanks to current events, this false equivalence is having a moment, but it is not new. It has surfaced before in circles critical of Israel’s policies, such as Jewish Voice for Peace, which employed similar chants during a small protest outside AIPAC’s Policy Conference in Washington D.C. in March 2016.

Historically, some far-left anti-war activists have included anti-Israel language in their calls to arms. Since 2001, the International Action Center (IAC) and its affiliate, the ANSWER (Act Now to Stop War and End Racism) Coalition have injected anti-Israel language (and implicit support for anti-Israel terrorism) into their anti-war messages. By equating the United States’ wars abroad with the Israeli-Palestinian conflict, and hosting rallies called “Occupation is a Crime: Iraq, Afghanistan, Palestine,”  ANSWER has sought to put the Israeli-Palestinian conflict on the anti-war movement’s agenda, and has succeeded, to some extent, in making it a core issue for the anti-war left. 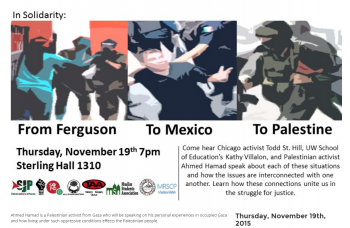 There have also been attempts to conflate Israel’s security efforts with the subjugation of African Americans and other minorities in the U.S. – in 2014, news of military action in Gaza was broadcast alongside reports of police brutality in Ferguson and beyond. And while some were simply trying to garner support for an anti-Israel agenda by attracting like-minded activists, others went so far as to imply that Israel was to blame for the violence in Ferguson. One Facebook event (“From Ferguson to Mexico to Palestine”) called for a boycott of Hewlett-Packard because of its operations in Israel.

Those critical of Israel have long exploited explosive social and political causes. This new iteration of an old strategy – as a kind of sidecar to protests of Trump administration policies – has given fresh life to the anti-Israel narrative, and has revived calls to boycott Israel. 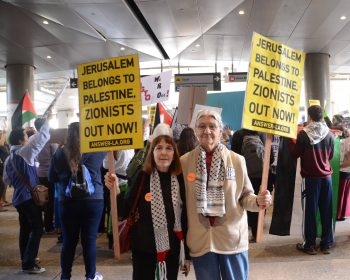 The resulting, sometimes extreme, rhetoric puts Jews and pro-Israel supporters in the crosshairs; during a recent protest at the Los Angeles airport, some protesters held up strongly worded signs urging the expulsion of “Zionists” from Jerusalem.