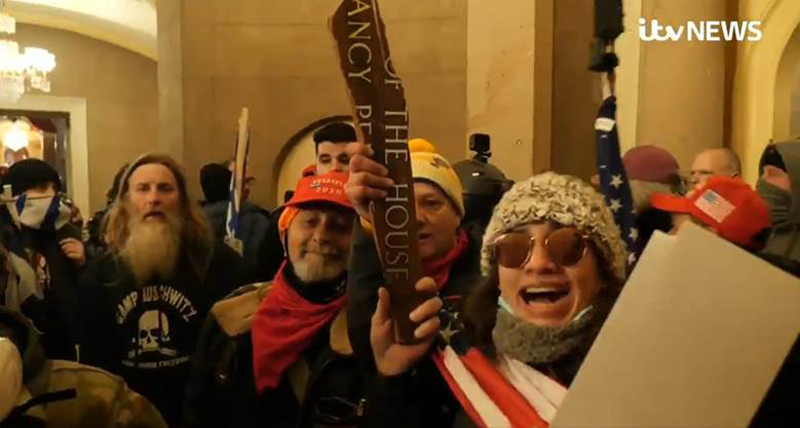 In the hours since pro-Trump extremists stormed the U.S. Capitol building, antisemitic ideologues, activists and conspiracy theorists have attempted to implicate Jews and Zionists in the violence. Although these antisemites have a range of opinions about President Trump, many were united in their belief that the events of Wednesday, January 6, 2021 were either planned by Jews or revealed the extent of Jewish and Zionist influence over the American democratic system.

Some antisemites who believe President Trump is too supportive of Israel have condemned the insurrectionists for supporting the president.  A Twitter handle associated with the white supremacist group Patriot Front tweeted that the pro-Trump extremists were “turning out in the streets for a disgraced Zionist fraud.” These sentiments were echoed by antisemitic and anti-Israel ideologue Angelo John Gage, who was affiliated with a white supremacist group in 2015, and who derided the pro-Trump extremists in Washington D.C., saying, “They are fighting for the Zionist quo.”

Conspiracy theorist and Holocaust denier Michael A. Hoffman II claimed on his blog that Capitol attckers were permitted to enter the senate chamber as part of a false flag organized by the “cryptocracy” in order to paint “patriot Conservatives” as “terrorists and Fascists.” Hoffman then employed antisemitic tropes to describe the insurrectionists, claiming that they are “worshippers of the Zionist state of counterfeit ‘Israel’” and are behaving “not like Christians, but like Israeli settlers.”

One Telegram user spotted what appears to be a Hannukah menorah in a photo taken by a pro-Trump extremist who had entered Speaker Pelosi’s office. “Many may have not noticed… but is that a Hanukkiah on the other desk in the background in Nancy Pelosi her office? It looks like that America is definitely not ‘first’ but the Jewish state of israel [sic] is number one priority for Pelosi.”

The white supremacist “Green Dragon” Telegram channel posted that the female Trump supporter who was killed inside the Capitol building was “executed by goons of political operatives for ZOG.” “ZOG” stands for “Zionist Occupation Government,” and is used by some antisemites as a shorthand way to express their belief that Jews control the government.

A Twitter user with more than 20,000 followers celebrated the damage to the Capitol building by comparing it to the ransacking of the Jewish Temple in Jerusalem in 70 C.E. “I love it when ZOG loses,” they wrote. 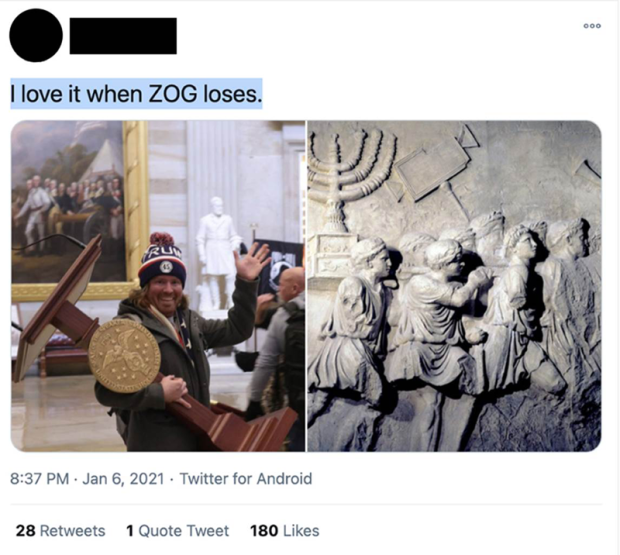 Palestina Hoy, a pro-Palestinian Spanish language Twitter account with more than 30,000 followers tweeted its take on the day’s events, which included images of the Israeli flag and the words: “Coup d’Etat in the USA. Zionism will be there, as always.” 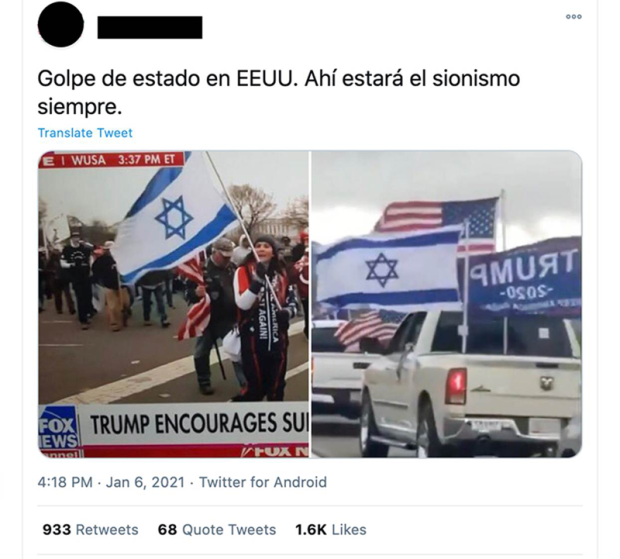 An anti-Zionist Facebook page posted an article about the Capitol attack, commenting that “Zionists are always here and there creeping in around, infiltrating organizations on both sides by creating narrative propaganda and actual terrorism to bring forth their own nefarious agendas in society. Just as cancer cells become part of the body and feed off of and destroy the host body over time.”

Not all antisemitic rhetoric about the attack on the Capitol included references to Israel.

As Wednesday’s speeches began, the Telegram channel of the white supremacist and antisemitic Goyim Defense League posted an obscene cartoon portraying a Jew controlling a Black Lives Matter activist on the street of Washington DC. 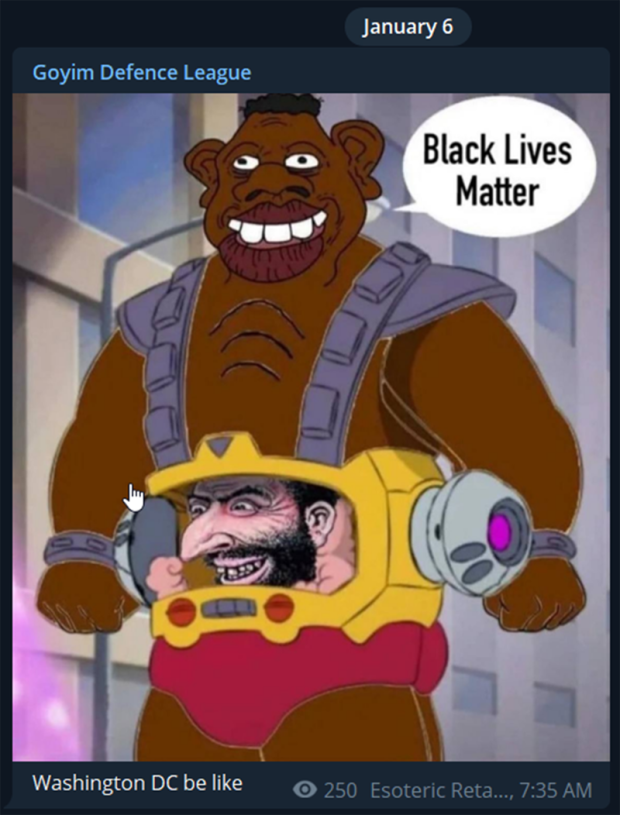 After the insurrection, various extremist channels celebrated the attack and expressed optimism about the potential for future violence. On Telegram, the “National Socialist Network” channel posted that “the brave White men in Washington DC have lit a flame that will never go out. By storming the spiritual home of the global parasite class, those heroes proved—before the whole world—that the Jews and their lackeys are not invulnerable.” The “White American National Socialist” channel posted that “what Whites must do now is to go out there and oppose these Jews & Sellout Politicians more and more because we finally showed ourselves we can be United and we achieve Victory here in America taking back our country along with showing the White People that we won't be tolerated by a lousy Jewish Minority!”

Other channels, however, insisted that the violence did not go far enough. On an antisemitic Telegram channel with over 2,000 subscribers, one post stated that the “USA is finished. Harris will assume rulership and the elite Jews will reset the system and agenda 21 will be rolled out.” (Agenda 21 is a longstanding antigovernment conspiracy theory that stems from a United Nations sustainability plan).

In addition to the proliferation of antisemitic and anti-Zionist posts online related to the attack, there were also manifestations of antisemitism on the ground during the siege on the Capitol.